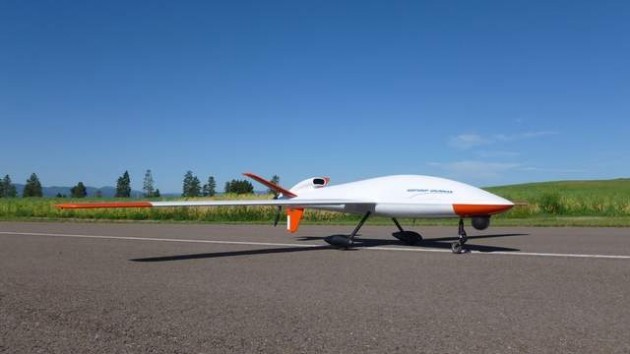 UPDATED: CORRECTED AUG. 14 AUVSI: Northrop Grumman is pitching a new method of drone pilot training to the Air Force and U.S. Customs and Border Protection based on a business model likely to gain in popularity as the drone revolution expands into civilian airspace: “fee for service.”

Rather than training pilots on valuable MQ-1 Predators and MQ-9 Reapers or in costly computerized simulators, Northrop is urging the Air Force and CBP to give remotely piloted aircraft (RPA) pilots basic flying time on a small drone system the company has developed called SandShark. They would pay by the hour for using the little planes, Karl Purdy, director of new UAS (Unmanned Aircraft Systems) programs for Northrop, told reporters here.

A “conservative” estimate is that switching to a fee for service training scheme could save the government $70 million a year in aircraft costs, simulator costs and damage or losses from pilot errors, Purdy said at the annual Association of Unmanned Vehicle Systems International trade show in Washington. Pilots wouldn’t even have to go to the private airfields in Arizona, Florida, Montana, New Jersey or Oklahoma where the company has or is expected to soon obtain permission from the Federal Aviation Administration to fly the SandShark, he said. Operators can control them over any 4G cellphone network or the Internet. CLARIFIED STATES WHERE SANDSHARK CAN FLY Aug. 14

“RPAs are 30 to 300 times more likely to crash than other small planes,” Purdy noted, citing published statistics. “The overwhelming majority – greater than 80 percent – are due to human error.” The overwhelming majority of accidents also occur on landing, when a UAS pilot has to look out a nose camera or the camera in a sensor ball to see the ground.

Northrop is pledging to eliminate that risk by supplying SandSharks and holding the customer harmless if they crash. The company can offer such a deal, Purdy explained, because a safety pilot will be on hand at the base from which the SandShark flies, ready to step in and take over using a line of sight radio control transmitter if the student pilot does anything “dumb, different, dangerous, (or) devious.” CORRECTED Misquote Aug. 14

The SandShark carries a sensor ball but it is really just a small trainer. Its fuselage is eight feet long, its wingspan is 15 feet, and while Northrop is willing to outfit the drone with either a gas or turbocharged engine, the model being flown has an electric motor whose battery needs changing after about an hour at most. The SandShark’s main purpose is train pilots using touch-and-go landings – as many as 50 an hour, Purdy said, though 10 to 15 such landings will tire a pilot out.

No word yet on whether the Air Force or CPB are actually interested in such an arrangement, but in the age of sequestration, Purdy is optimistic the fee for service business model makes sense.

Special Operations Command has done similar deals with Boeing/Insitu and AAI. They

SOCOM awarded AAI a three-year contract in April to fly its Australian-built, catapult-launched Aerosonde Mark 4.7 UAS on ISR missions for special operations overseas. The Mid-Endurance Unmanned Aircraft Systems II contract, valued at just under $600 million, resembles a $250 million deal Insitu has had since 2009 to fly missions for SOCOM with its ScanEagle, also catapult-launched.

Purdy said he expects to see such fee for service arrangements become common in the UAS industry when the Federal Aviation Administration opens the national airspace to widespread commercial use of drones, as required under a 2012 federal law.

“I believe in the civilian arena that you’re going to see co-ops among farmers who’ll say, ‘I can’t afford to buy an airplane, but I’d like the service, so maybe if I go in with my buddy John down the road, we can have somebody come in and survey the land or dust crops,” Purdy said.

Northrop was offering visitors to its booth at the AUVSI conference a chance to fly the SandShark live, but while Purdy agreed the system could make a great “extreme video game,” don’t expect to see a SandShark booth at your next county fair.