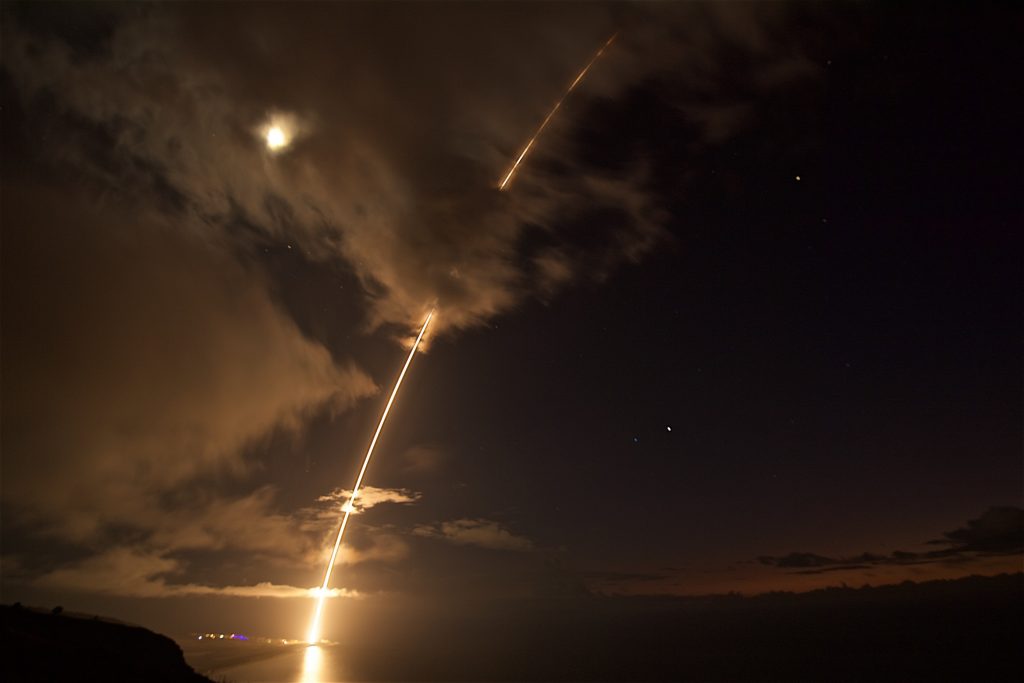 A missile fired from the USS John Paul Jones intercepted a target at the Pacific Missile Range Facility in 2017.

PENTAGON: The Pentagon’s next-generation interceptor warhead to kill ballistic missiles, the Redesigned Kill Vehicle (KV), is at least two years away from working out its issues, despite years of development. That pushes back the fielding of the last pieces of a $40 billion dollar missile defense system that has struggled since the late 1990s.

The RKV delay won’t effect the overall expansion of the Ground-based Midcourse Defense (GMD) system from 44 to 64 interceptors based in California and Alaska — meant to protect the United States from North Korean missiles — but it does ensure that the existing interceptor, the Exoastmospheric Kill Vehicle (EKV), s will stay in service even longer, despite a spotty track record.

Both the fledgling RKV and the current EKV are built by Raytheon. Both go on the same booster rocket, the Ground-Based Interceptor. The GBI soars above the atmosphere into space, where the kill vehicle detaches and collides with the incoming ICBM, destroying it (hence the name “kill vehicle”).

The delay, which was outlined in the Missile Defense Agency’s 2020 budget request released Tuesday, pushes back the new system’s first potential test intercept until fiscal year 2023 (which begins Oct. 1 2022). The Redesigned Kill Vehicle will not be placed on missiles until around 2025 at the soonest.

“We’ve got to take a look at the whole design,” Rear Adm. Jon Hill, deputy director of the Missile Defense Agency told reporters. “We’re reassessing the whole program.” Neither Hill nor the budget documents

The current EVK has logged only 10 successful tests out of 18 tries since 1999. The new RKV has not performed up to expectation in initial tests, Missile Defense Agency officials said Tuesday, leading them to push back its fielding while they take a harder look at its shortcomings.

The Missile Defense Agency said in 2016 that the first flight test of the RKV was expected in 2019, with fielding in 2020.

Hill added that the RKV is still in the Pentagon’s plans, but “we’re going back to assess that design, do the proper testing, do the analysis, then we’ll go to the critical design review when we’re ready.”

The US is building 20 more missile interceptors to install at Fort Greeley, Alaska, adding to the 44 already in place there and in California. All these interceptors will have their current Exoatmospheric Kill Vehicle (EKV) replaced with the RKV when it’s ready.

Overall, the MDA saw its 2020 budget cut by $1 billion to $9.4 billion, after several years of funding increases as North Korea continued to conduct missile tests. Both Pentagon comptroller Elaine McCusker and MDA acting comptroller Michelle Atkinson told reporters (in two separate briefings) that the decline was really just a return to more normal but still robust funding levels as the agency wraps up programs boosted over the past few years.

But the recently concluded Missile Defense Review proposes a wide range of new and costly programs. The current Pentagon budget includes about $1.3 billion in MDR-related technologies, but these are outside the Missile Defense Agency. When the initial studies lead to actual weapons programs, however, MDA will probably pay a large part of the bill — somehow.