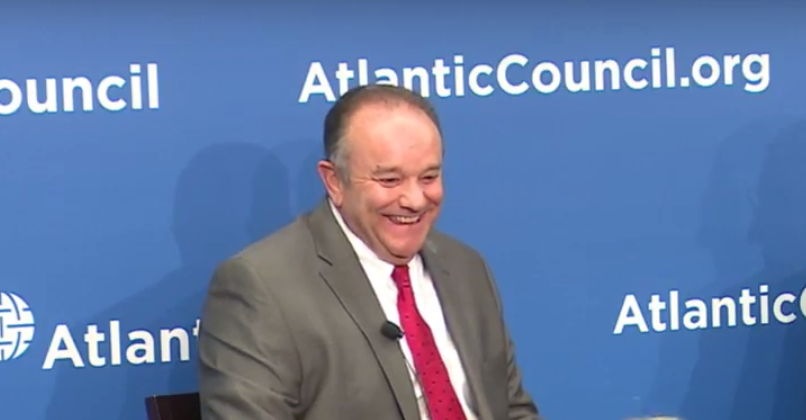 WASHINGTON: Retired Gen. Philip Breedlove, just weeks after retiring as NATO’s Supreme Commander, Europe, urged the alliance to reopen “a line of communication” with the Kremlin. While Breedlove’s tenure as SACEUR was wracked by the annexation of Crimea, the invasion of eastern Ukraine, and NATO’s race to strengthen its defenses, his focus was not on building walls against Russia but, in a clear echo of Defense Secretary Ashton Carter — instead on opening doors to it.

“The first and foremost point is that…we have to, with purpose…set forth to establish a line of communications, ” Breedlove said at the Atlantic Council Wednesday afternoon. A starting point perhaps would be expanding on the existing process for managing incidents at sea, a proposal he made before retiring.

“We need to have meaningful dialogue,” he said. “The question is, is that dialogue possible by our government, or is that some sort of track two (i.e. unofficial channels) on steroids?”

Russia may well resist this outreach, Breedlove acknowledged, but we have to keep trying. “I may be frustrated and frustrating in the beginning, but we really, I don’t think, have any choice at this point,” he said. “We need to move out.”

With or — especially — without a formal line of communications, military preparations speak an implicit language all their own. So Breedlove urged NATO to calibrate its deterrent efforts carefully to avoid alarming a touchy Russia. For example, the massive Anakonda (Anaconda) wargames underway in Poland are technically a Polish-led multinational exercise — all of whose participants happen to be NATO members or partners — although, confusingly, a separate NATO event is also happening in parallel.

“The alliance took a decision not to connect the two to make it less — hopefully — less offensive to the Russians,” Breedlove said. “One can understand that the Russians don’t see the difference.”

Finally, preparing for the worst case, NATO needs to write its war plans with “off ramps” that allow the Russians to deescalate and disengage without feeling defeated. Otherwise, Breedlove warned, the danger is that current Russian doctrine — which Russian forces really do train to execute — prescribes tactical nuclear strikes in event of a conventional defeat.

The paradoxical Russian term for this idea translates as “escalate to deescalate”: In essence, hit the other guy so hard he sues for a ceasefire. The way to counter such a radioactive strategy, Breedlove seemed to say, is to find a way to stop aggression without punishing the aggressor too heavily in the process.

NATO needs a war plan, Breedlove said, “that demonstrates power, that demonstrates capability, but provides off-ramps so that both nations — (especially) the one that espouses using tactical nukes — sees an opportunity to in some way meet some of their objectives but begin to decelerate.”

Breedlove isn’t advocating appeasement: “I would just repeated what our president said at Wales (during the 2014 NATO summit). He was extremely clear that we will defend every inch of NATO territory.”

“Russia does understand power and strength and unity, and so those are good ingredients for beginning our path to –… you choose the word, whatever is we’re going to establish with Russia in the future,” Breedlove said. But in the long term, he said, “cooperation, partnership, you determine what that word is, at some point in the future we’re going to have to have (it) with Russia.”