Rep. Norm Dicks, Boeing Stalwart, Leaving Congress; He ‘Will Always Be My Chairman’ 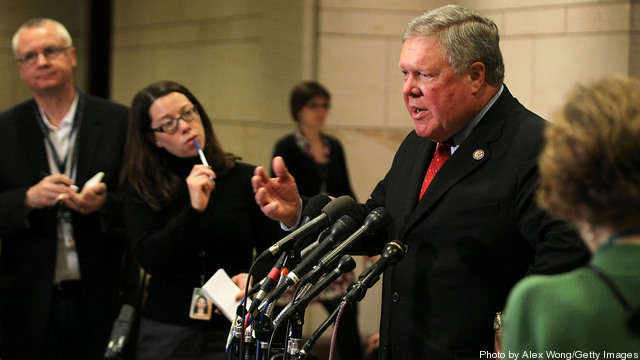 WASHINGTON: Norm Dicks, one of the toughest and most engaging players in Congress, announced today that he will not run for Congress again after 36 years serving his country.

Dicks became best known in recent years for his hard-edged and sometimes unquestioning support for Boeing on the House Appropriations defense subcommittee. His advocacy of the company could sometimes veer perilously close to pitchman. I still remember him approaching reporters outside the House Armed Services Committee’s hearing room and telling us about a “study” that proved Boeing’s offering for what became the botched airborne tanker contract would be much cheaper than competitor Northrop Grumman’s offering. Left unsaid, until we asked, was that the “study” had been done by a consultant working for Boeing. Boeing, after losing the $35 billion contract once, won it after the contest was reshaped by the Pentagon. Many observers believed Dicks successfully drove the military to reshape the contest to Boeing’s advantage.

Boeing quickly issued a statement about Dicks’ departure after an enormous 36 years on Capitol Hill, hailing him as, “a true champion for his district and for all of Washington State. Many Boeing workers are proud to call him their representative in Washington, DC.” Boeing spokesman Dan Beck went on to note that Dicks’ service on both the House Appropriations Committee and the House Permanent Select Committee on Intelligence Congressman “helped shape United States national security policies and priorities across five decades.”

In February 2010 during the hotly contested competition to build the airborne tanker, I asked Dicks what he would do if Northrop Grumman pulled out of the competition. With some panache, he smiled and said: “I will say hallelujah.” Perhaps realizing that this might go a bit far, he quickly added: “Everybody would like to see competition.”

Dicks’ combination of hard-edged political calculation, humor and bluff, hearty exuberance earned him many admirers among his colleagues. “Congressman Norm Dicks will always be my ‘Chairman’ and a dear friend,” Rep. Steve Rothman, a member of the House Appropriations defense subcommittee said in a statement. “Every day, Mr. Dicks shows an unparalleled passion and commitment to our nation and keeping America safe.”

President Obama issued this statement: “Norm has spent his career working to protect our national security, championing the men and women of our Armed Forces and fighting for the many natural resources of Washington State and the Pacific Northwest.”

One of the savviest watchers of Capitol Hill and the defense industry, Loren Thompson, defense consultant and analyst at the Lexington Institute, believes Dicks’ departure will mark a “watershed” after his his 36 years of service on the Hill.

“The Vietnam generation of legislators, most of them Democrats, is beginning to pass into history along with all the rest of us baby boomers,” said Thompson, a member of Breaking Defense’s Board of Contributors.

“There were two things that made Dicks different from the other Democrats elected in the aftermath of Vietnam. First, he was always a strong supporter of the military, just like his former colleague Jack Murtha from Pennsylvania. And second, Norm was an unstoppable force when he really cared about something, whether it was protecting the Puget Sound Naval Shipyard or pushing the military to invest in modern air power,” Thompson said.

Dicks will not only be missed by Boeing, the defense consultant thinks: “Boeing routinely turned to him for help on major programs. But he will also be missed by other defense companies with no roots in the Northwest, because Dicks cared passionately about making sure U.S. warfighters had the best technology available.”

Rep. Adam Smith, ranking member of the House Armed Services Committee, knows Dicks well, especially they serve adjoining congressional districts. “We’ve partnered to secure funds for school reconstruction on Joint Base Lewis-McChord, to protect the Green River Valley and strengthen the Howard Hanson Dam, and we’ve worked to strengthen the industrial base in the Pacific Northwest,” Smith said in a statement. Dicks will be known to many in Washington State for his work protecting Puget Sound.

In his wake — and Dicks will leave a wake behind him as does any great warship heading to sea — the outgoing congressman will leave a scramble for one of the most influential seats on Capitol Hill, that of senior Democrat on the appropriations defense subcommittee. Rep. Jim Moran, right after calling Dicks’ “irreplaceable,” announced he would try to replace him. Rep. Marcy Kaptur is technically next in line to Dicks but she faces a tough reelection. Rep. Rita Lowey of New York is in the race. Expect one or two other Democrats to try for the slot. Defense lobbyists will be watching this one very closely, as will Senate appropriators and senior Democrats on both sides of the Hill.