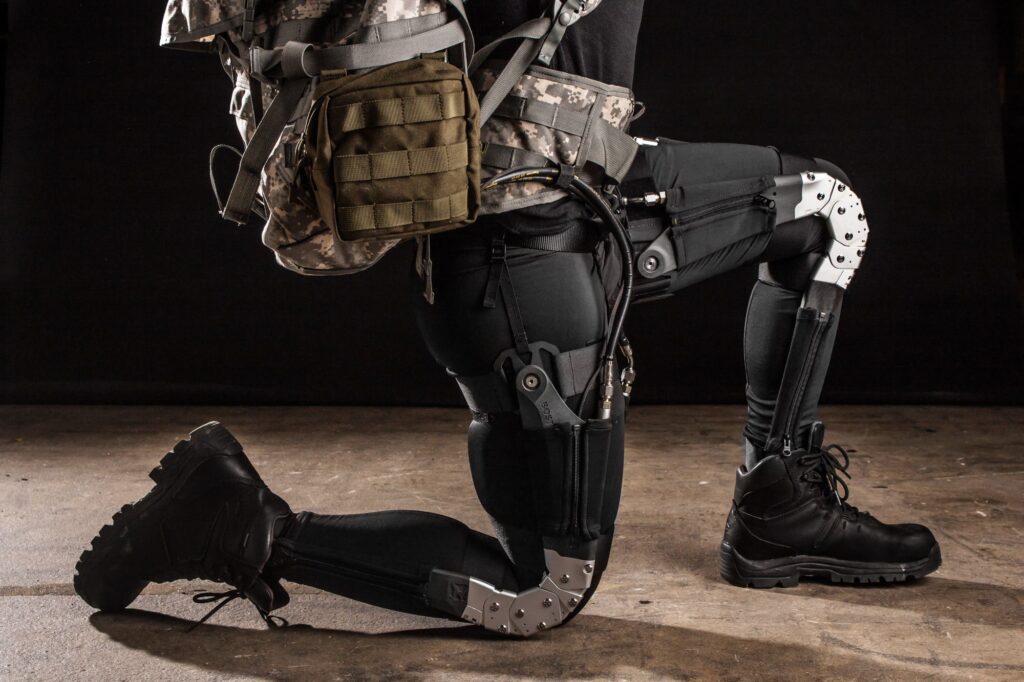 WASHINGTON: Advocates of military exoskeletons, from the former chief of Special Operations Command on down, like to invoke Iron Man, Marvel’s iconic armored superhero. But there are other models for more modest and more feasible, yet still militarily valuable uses of exosuit technology. So don’t just think of Robert Downey Jr.’s Iron Man. Think of Sigourney Weaver’s Warrant Officer Ripley, clunking along in a kind of wearable robotic forklift:

Glamorous it isn’t, but Ripley’s loading heavy supplies aboard a Marine Corps landing craft — the kind of unsexy but essential mission that real-life exoskeletons may actually be able to do in the next few years. In an invitation-only workshop I attended this morning at the Center for a New American Security (CNAS) with military officers, technical experts, and thinktank wonks, what struck me was how low some of the low-hanging fruit may be, just waiting for exoskeletons to reach out and pick it with their iron claws.

The big debate this morning, in fact, was how to balance seizing the immediate opportunities for naval forces with exploring high-risk, high-payoff areas such as damage control. Several participants pleaded to get current prototypes out into the fleet fast, hauling ammunition and other heavy objects, so the Navy can build experience with and confidence in the technology, rather than keep tinkering in the lab in pursuit of more ambitious missions where it’s easy to over-promise and under-deliver.

The conveners of the workshop, however, were more optimistic about the higher-end applications. “The killer app [is] damage control, ” Andrew Herr told me after the workshop. “[It’s] a near-term possibility.”

Herr, president of the emerging-technologies consultancy Helicase, and his collaborator, Navy analyst Scott Cheney-Peters, convened today’s not-for-attribution session to get feedback on their forthcoming study — due out later this year — of how naval forces can use exoskeletons. (The study will be published by CNAS’s 20YY initiative, and both men emphasized this is a personal project, not something that represents the official views of their organizations).

Most news stories, science fiction, and even real-life research have focused on exosuits for ground troops. Herr and Cheney-Peters, however, focused on applications at sea and in the shipyard. Unlike a Special Operations raid, shipboard work occurs in well-mapped, orderly environments with flat surfaces to walk on and easy access to electrical power — all of which makes exoskeletons much easier to operate.

But “easier” doesn’t mean “unimportant.” A huge amount of sailors’ time and energy goes into mundane heaving and hauling. Navy ships require lots of heavy equipment to be manhandled into tight spaces where, say, a forklift just won’t fit.

“I don’t think most people know that supplies still come to the ship on boxes and they’re slid down ramps and people physically pick them up and carry them to another space,” retired Marine Corps Col. T. X. Hammes told me after the workshop. That takes time, a precious commodity in combat; it takes manpower, the military’s most expensive asset; and it wears people out, leading to repetitive motion injuries and accidents.

“Very often in military situations…muscle power is the thing that’s critical,” Hammes said, especially when you have to transfer supplies and ammunition from the dock to the ship, or from the ship onto an aircraft, or from a helicopter to the landing zone ashore: “That’s where this kind of low-end exoskeleton could have tremendous benefit.”

“As you move to the Iron Man, that’s a very different concept, much more expensive, much more difficult to do, and I think what you’ve got to do is separate out the two things,” Hammes continued. “If you try to do them all with the same platform, it’s like the F-35 [multi-service, multi-mission fighter]. If you try to build something to do both what a Ferrari does and what a dump truck does, you’ll go broke and it’ll never work.”

“I think you need to basically have separate programs,” agreed Herr in our conversation later: one for the long-term research on ground soldier exosuits, one for the near-term engineering of shipboard suits. But he thinks a damage control exosuit belongs in the near-term branch. Something tough enough that sailors can wear into a burning or flood compartment on a damaged ship is just a few clunking, mechanical steps beyond a mundane ammo-loader, he said, while the infantryman in shining Iron Man armor is a long way away.

“My hope is that decision-makers don’t see exosuits as something so exotic that they don’t take their potential near-term benefits seriously,” co-author Cheney-Peters said in an email. “At the same time, as one discussant noted, we need to continue thinking about the longer-range impact of how we approach the technology today.” That argues strongly for a two-pronged approach — and, he added, for designing the near-term exosuit to be easily upgraded as the technology matures.