Here’s the latest exciting — and unnerving — unmanned system to catch our eye: a 1.5-ton robot that shoots the ever-living crap out of things.

Oh, and the manufacturer, Northrop Grumman, most famous for building the B-2 stealth bomber, decided to call it MADSS, as in angry or insane. Perhaps they could’ve been a little more reassuring there. 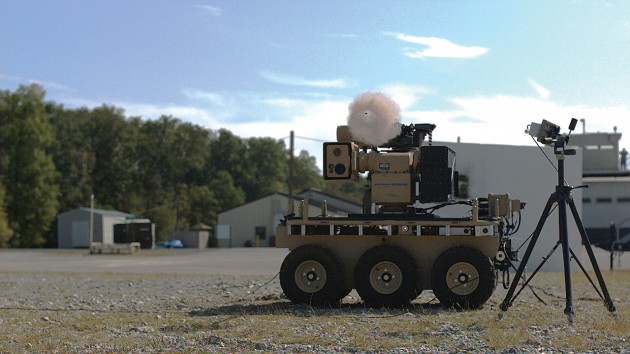 Here at Breaking Defense, we love our robots. Robots that fight fires, robots that run faster than Usain Bolt, robots that grab obstacles and shove them out of the way, robots that you launch from a catapult and catch on a wire. But the “Mobile Armed Dismount Support System” is something else altogether. MADSS is designed to providing covering fire for foot soldiers — i.e. ones who have “dismounted” from their vehicles — with a variety of plug-and play weapons options, which range from the man-portable M240 machinegun in the video to the M-19 grenade launcher, the famous 0.50 caliber M2, and unspecified still bigger-bore weapons.

It’s crucial to realize that the robot doesn’t just drive around shooting stuff on its own: There’s a human being pulling the trigger, telling it where to aim, and when to shoot — if he lets it shoot at all. “NO auto fire!!!” emailed one Northrop tech when I asked whether the robot could choose to open fire on its own. That said, once the human sets the targets, MADSS can swing its gun back and forth to spray them with bullets all by itself. But that’s a far cry from the killer robots of science fiction: “No Terminators,” one Army officer told me when I asked him about the service’s future plans.

In fact, a human has to tell MADSS where to go, driving it around a bit like a kid’s radio-controlled car. Because the ground is infinitely more full of obstacles than the air, ground robots haven’t yet developed the ability to navigate by themselves that advanced drones like the Global Hawk spyplane (another Northrop Grumman product) . And even for armed drones like the infamous Predator, the military still insists on a human being making the call to shoot or hold fire. 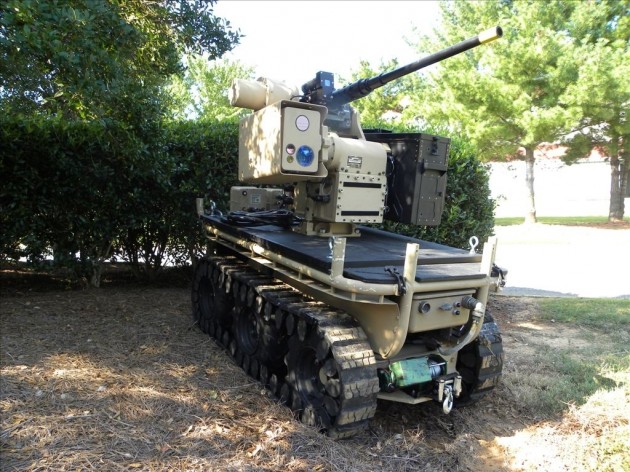 It’s also important to note that the military hasn’t actually bought MADSS yet. The Army is assessing the system, along with many others, for an “Armed Unmanned Ground Vehicle” project. Meanwhile, MADSS’s unarmed cargo-carrying cousin, the CaMEL, is participating this week in a “robotics rodeo” at Fort Benning, Georgia, the main training center for Army infantry. The infantry are in charge here because robots like MADSS and CaMEL are designed to trundle along at about five miles per hour, following foot soldiers to haul supplies and heavy weapons where traditional combat vehicles can’t go.

Here’s a video of CaMEL (another contrived acronym, this one for “Carry-all Modular Equipment Landrover”):

MADSS is actually built on a CaMEL chassis, but of course it’s much scarier than what’s basically a self-propelled all-terrain version of a hotel’s bellhop cart. The armed model’s turn to shoot stuff up under official Army observation is on Thursday the 10th. (The video is from an earlier test). Even if that goes well, the service will still have to consider whether to start a formal competition for armed unmanned ground vehicles, a contest MADSS isn’t guaranteed to win. The Pentagon routinely bypassed this process to rush new technology to Iraq and Afghanistan, with mixed results, but as the war winds down the money is drying up and the bureaucracy is back in charge.

So we’re years away from seeing MADSS or another remote-controlled combat robot in the field, and probably decades from seeing one so sophisticated the Army trusts it to pick a target on its own. But the military’s fiscal incentive to replace expensive humans with sophisticated machines — and the American public’s deep distaste for taking casualties — means we are definitely heading down that road.