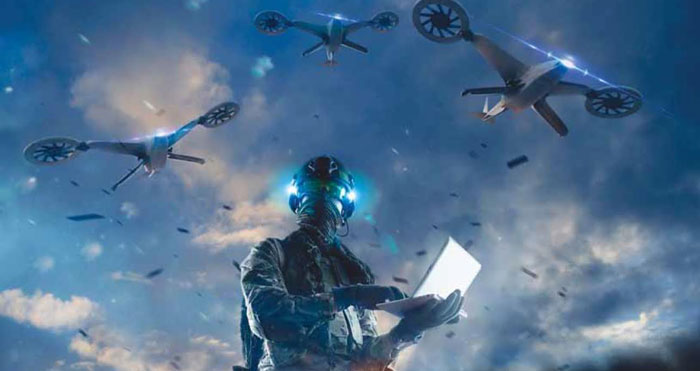 Cover art from the new CNAS study, “20YY: Preparing for War in the Robotic Age.”

After our story yesterday on Robert Work and Shawn Brimley‘s disconcerting vision of future robotic war, we got a thoughtful response from Brimley that, with his permission, we’ve published below. The Editors.

Bob and I wrote the paper because we feel strongly that there are some powerful trends affecting the relationship between technology and military strategy that warrant much attention — inside and outside government.  We wanted to generate a debate on the degree to which the continued emergence of robotic systems (in both the commercial and military world) will impact U.S. defense strategy and planning.

In your article, you are contrasting two different visions of the character of this emerging regime. That is precisely the intent of CNAS’s 20YY initiative: inquiry and debate. So whether or not the “no terminators” rule or our more expansive vision prevails, it’s all good.  If people are debating these issues, we’re accomplishing our objective.

Along with advances in guided munitions, we think the rise of robotics may herald the beginnings of a new regime, one in which the proliferation of robotic systems affects deterrence, crisis stability, concepts of operation — all elements of military strategy, in fact. We see a world in the not-so-distant future where adversaries can achieve, at least for a short period of time in a particular contested zone, some degree of parity with the U.S. in guided munitions. You add to that parity the next generation of robotic systems — in the air, on the ground, and on or under the sea, many of them having a serious degree of autonomy — and to me it looks like a very complex, lethal, and scary place.

To the degree that readers debate the merits of this or that point within our broad hypothesis, we think that accomplishes our objective.  And even if folks totally reject the idea that the we are just seeing the opening phases of the robotics revolution (Peter W. Singer used this term back in 2009), that is all good as well.

Your article juxtaposes our thinking with the Army’s, which seems to generally agree with trends as we see them but may disagree with how they will play out or the contours of the 20YY regime or the exact character of future concepts of operations.  This is what we hope would happen. We want to draw the Army — and the Navy, Air Force, Marines, and special ops — into the debate.

We hope most people won’t argue the regime is coming. We want them thinking about how it might unfold. The fact that your article implies the Army sees the 20YY regime coming–even in a slightly different way–is a great sign.

We think the guided munitions regime will come to full maturity when the ground forces have to deal with guided munitions the way the Navy and Air Force do and start to adapt their operations and organizations accordingly. When they do, it’s hard not to think unmanned systems will become more central.

The fact that the Army is thinking seriously about unmanned systems also helps inoculate us to some degree from those who would try to associate our thinking with some of the RMA-silliness we saw in the 1990s. As we write in the report:

“Technology does not make war more clinical; it makes it more deadly. Precision doesn’t make the battlefield more sterile, but rather makes it increasingly lethal.”