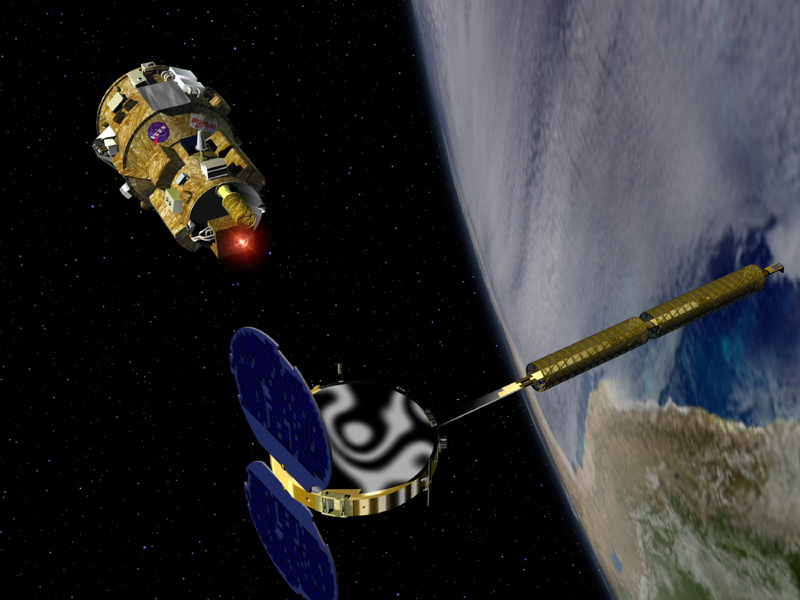 WASHINGTON: Russia has been working since 2011 to develop a next-generation on-orbit anti-satellite (ASAT) weapon, according to two new studies by U.S. nongovernmental organizations.

The Secure World Foundation’s “Global Counterspace Report,”  finds that the Russian work on a space-based ASAT codenamed “Burevestnik” (also known as Project 14K168) is being undertaken in tandem with a larger effort to develop a space-based space situational awareness (SSA) capability. The SWF report, and one by the Center for Strategic and International Studies (CSIS) were released today and based on open source information.

“Open source research done by analyst Bart Hendrickx suggests that the Cosmos 2491, 2499, 2504, and 2521 satellites are part of a project started in 2011 to develop space-based space situational awareness (SSA) capabilities and may play a supporting role for other counterspace weapons,” the SWF report says. “Publicly-available documents and patents suggest a link between those Cosmos satellites and procurement for a project designated Nivelir …  under the control of the Central Scientific Research Institute for Chemistry and Mechanics (TsNIIKhM). Hendrickx also has uncovered evidence suggesting there is an active Russian co-orbital ASAT program codenamed Burevestnik (“Petrel”) or project 14K168, also managed by TsNIIKhM and also started in 2011.” Burevestnik “may be designed to target GEO satellites, although it may be targeted against LEO satellites instead.”

The CSIS report, Space Threat Assessment 2019 includes similar information about the Burevestnik, based on information first published in Jane’s in September 2018. The co-orbital (i.e. a small satellite placed in a similar orbit to its target) weapon, CSIS states, “may be” aimed at targeting GEO satellites.

The two studies are fraternal twins, in that the two organizations have been coordinating on both research and release of their findings. The SWF study is much more technical and detailed, aimed at educating policy-makers and the public on the state of counterspace technology development in key countries. The CSIS report, on the other hand, is looking at the counterspace capabilities of potential U.S. adversaries and focuses on characterizing  threat levels. Thus, SWF is concentrating on the countries where the most research on potentially counterspace-related technologies is ongoing including the United States and India; whereas the CSIS study is focused on China, Russia, Iran and North Korea while including brief overviews of others such as Europe, India and Israel.

Both studies are premised on the fact that there is too much secrecy surrounding global military space activities — a belief that is echoed by many in the U.S. national security space community.

The most significant new information in SWF’s  2019 report, explains Brian Weeden, SWF technical adviser, includes the depth of the new evidence about the Russian SSA/co-orbital ASAT. “I think the most important bits are … about the recent Russian RPOs likely being an SSA/intelligence program and possibly supporting the new Burevestnik co-orbital program. That I think is pretty new disclosure in open source and Bart Hendrickx has done a great job tracking that.”

“New analysis published in Jane’s Intelligence Review in September 2018 suggests that Russia’s newest co-orbital system may be designed to target satellites in GEO. Designated Burevestnik—a commonly-used name for Russian defense systems, meaning “stormy petrel”—the new co-orbital ASAT system is likely connected to a recent Russian RPO observed with suspicion by the international space community over the past five years. The on-orbit inspection component of the Burevestnik system appears to share greatest similarity with Russian RPO activities in LEO in 2017 and 2018, including the use of relatively lightweight satellites for close approaches.”

Pavel Podvig, an expert on Russian nuclear and space forces at the United Nations Institute for Disarmament Research in Geneva, assures me that the Burevestnik ASAT program is “real,” although little is known about it.

Chinese and Russian on-orbit experiments over the past five or so years have freaked out many in the U.S. Congress and the national security space community, and have in many instances been hyped by media reports. Indeed, on April 3, Ken Rapuano, assistant secretary of defense for homeland defense and global security, told the HASC Subcommittee on Strategic Forces that Russia and China are conducting “sophisticated on-orbit activities to counter space capabilities” as they continue “developing, testing and fielding a full suite of antisatellite (ASAT) weapons.”

The specific on-orbit experiments have involved the Chinese SJ-12, SJ-15, SJ-17 satellites, and the Russian Cosmos 2499, Luch, and Cosmos 2521 satellites. But SWF takes a less alarmist view, arguing that the satellites appear to be used for intelligence purposes and satellite inspections.

All of these programs show, SWF says, an “operational pattern” consistent with “slow, methodical, and careful approaches to rendezvous with other space objects in similar orbits. The satellites they are known to have approached were in similar orbits and based on the publicly available data they did not make huge changes to rendezvous with satellites in significantly different orbits.”

The SWF study cautions against jumping to conclusions about the Russian and Chinese experiments. Rather than being weapons-related, the “most likely military utility of the capabilities demonstrated” by the remote proximity operations (RPO) is for “on-orbit SSA and close-up inspections.”

This is not to say the Chinese and Russian on-orbit experiments are not aimed at ASAT weapons development, given what is known about both countries space doctrines and force posturing. Both countries are known to be developing, or have developed, terrestrially-based kinetic energy ASAT missiles.

Both also are (like the United States) working on directed-energy programs for a variety of weapons applications. For example, both SWF and CSIS in their 2018/2019 studies have documented Russian use of electronic jamming of GPS in Syria, the Baltic region and Ukraine.

CSIS, echoing publicly released U.S. Intelligence Community assessments, finds that the Russian and Chinese counterspace developments present significant threats to U.S. space systems. SWF is more demure about judgements but their study does conclude the evidence shows “significant research and development of a broad range of kinetic (i.e. destructive) and non-kinetic counterspace capabilities in multiple countries.” It cautions, however, that “only non-kinetic capabilities are actively being used in current military operations” by any country.

Both reports hone in on the fact that several recent U.S. government reports suggest China is developing at least three direct-assent (DA) ASAT missiles for targeting satellites in LEO, MEO and GEO orbits. Interesting, SWF took a slightly more hawkish view on the state of Chinese DA ASATs than the CSIS report. The report finds that at least on of the three, “most likely the SC-19” used in the infamous 2007 test, has “reached operational status” and begun actual fielding with Chinese forces.

“Neither report, however, provides evidence that would back up claims made in late March in the Indian newspaper The Print, and repeated in an April 1 report in the DC-based Free Beacon, that new commercial satellite imagery of testing facilities in Xinjiang proves Chinese advancement of research on lasers and electro-magnetic pulse weapons.

Neither report was able to provide details about the March 27 Indian ASAT launch because they’d been finished by then. The SWF report shoehorned in a brief wrapup: “India held such a kinetic ASAT test in March 2019 where it destroyed one of its own satellites. However, given how much investment the Indian military is making in its satellite capacity, India’s continued insistence that it is against the weaponization of space, and the income that Indian rockets are making launching other countries’ satellites, it is unclear whether they will move to actively create an official counterspace program and they may just stop at having proved an ASAT capability.”

Finally, the SWF report includes a section on U.S. counterspace developments. It includes, according to Weeden, new information gathered by the Russian ISON network of independent space observers showing  GSSAP maneuvers, since the U.S. does not provide such information. “Data collected by the ISON space surveillance network, managed by the Russian Academy of Sciences, indicates that the GSSAP satellites have conducted hundreds of maneuvers since 2014 and have conducted close approaches or proximity operations of more than a dozen operational satellites in GEO,” it says. This includes close approaches of “several U.S. military satellites and also several Russian or Chinese military satellites and commercial satellites built by China and operated by other countries.”

According to the Russian sources, some of these maneuvers were done when the satellites were passing through Earth’s shadow. The study notes that because those moves were impossible to track, they “made it very difficult to estimate the current and future position of the GSSAP satellite and the other object, creating difficulty in determining safe approaches and ascertaining the intent of the approach, which could lead to misperceptions and mistakes.”