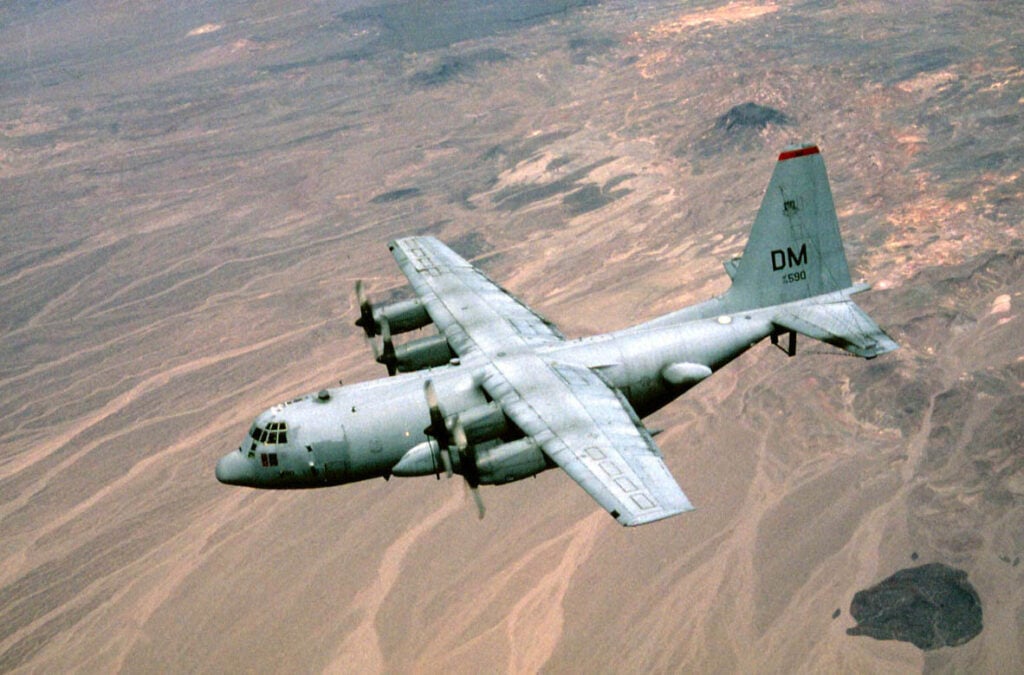 GEOINT: The Compass Call is supposed to be one of America’s foremost electronic warfare weapons, but the EC-130s flying near Syria are being attacked and disabled “in the most aggressive EW environment on the planet,” the head of Special Operations Command said here today.

“Right now in Syria we are operating in the most aggressive EW environment on the planet from our adversaries. They are testing us everyday, knocking our communications down, disabling our EC-130s, etcetera,” Gen. Raymond Thomas told an audience of some 2,000 intelligence professionals.

UPDATE I listened to Thomas and had two people listen to my recording before posting my story. All three of us concluded he said EC-130. The video posted later by the US Geospatial Intelligence Foundation (USGIF) leaves me shaking my head. He may have said AC-130, which, given he’s SOCOM, may make more sense since the AC-130 is a unique SOCOM weapon. I’m not sure that makes much difference since, while the AC-130 may not be a dedicated EW weapon, we know the aircraft is designed to operate in very hostile environments and possesses sophisticated EW equipment. An EW officer is a regular crew member on the AC-130U. So, the basic point about these EW-capable aircraft being jammed remain valid, regardless of whether he is saying A or E. Of course, we presume the Compass Call remains the more capable EW platform. UPDATE ENDS

While, for obvious reasons, we don’t know many details about the nature of the attacks on the EC-130s, we do know the Russians have done what one EW expert called a “good job” in several recent conflicts using EW. And the Russians are in force in Syria and provide most of the gear used by the Syrian military.

“The Russians have redone and reengineered their entire EW fleet in the last 20 years,” notes Laurie Moe Buckhout, a retired Army colonel who specializes in EW. After the Russians attacked Georgia, they concluded they needed to upgrade their EW capabilities, she says. “The Russians put in millions on upgrades after Georgia. They’ve ended up with killer capabilities, jamming in a multitude of frequencies for hundreds of kilometers.”

She also notes that the Russians may not have gone head to head against the EC-130s EW attack capabilities. They may have taken the much easier route of interfering with the Position, Navigation and Timing (PNT) or their communications gear, making it more difficult to fly the aircraft since crews would have had to rely on maps, line of sight and other techniques.

“The problem the EC-130s have is that, while they are jamming, the crews aren’t doing much else,” making them more vulnerable to attacks, she says. “They could have gone after the PNT or the comms.” The Russians “know all of our vulnerabilities.”

There are other problems US forces must cope with, says Loren Thompson, a well known defense consultant: “We’ve spent so much time fighting enemies in Southwest Asia who were technically unsophisticated that we are not up to speed on tactical electronic warfare.” Buckhout said Thompson has a point.