UPDATED WASHINGTON: US commercial satellite sales to AsiaSat, and the company’s leasing of communications bandwidth to China, are not threats to US national security, say experts — contrary to charges by Republican Senators Charles Grassley and Joni Ernst. Instead, US export control law very deliberately has been crafted to encourage such sales in a series of reforms starting in the Obama Administration and being accelerated by the Trump Administration.

“This is not a loophole, it’s a deliberate feature of U.S. trade policy. Commercial SATCOM bandwidth is a commodity and there is no threat to national security by leasing these transponders to a foreign government,” Brian Weeden, director of program planning at Secure World Foundation, told me today in no uncertain terms. “In fact, the Trump Administration’s current trade negotiations with China are aimed at expanding sale of U.S. commodities with China.”

“We don’t prohibit soybean sales to China because they could be being eaten by PLA soldiers,” said one exasperated industry representative. “This is not a loophole … it’s a legal action that has been taken. It is a decision made by the US government regarding the equities; that is that the US benefits more by selling soybeans and bandwidth to China than it risks.”

Sens. Grassley and Ernst stirred up a hornets nest of allegations in a June 27 letter to Secretary of State Mike Pompeo, decrying the use of Boeing-made satellites by AsiaSat and the leasing of SATCOM bandwidth by the company as an insidious exploitation of by China to steal US technology for military uses. 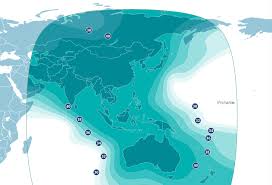 The ground coverage footprint of AsiaSat 9, the company’s newest satellite

The letter states: “The Chinese government appears to have evaded U.S. law through two loopholes that enabled it to have access to, and direct use of, American-built satellites. First, China reportedly rents bandwidth from satellites that it is otherwise prohibited from buying. …. Second, Chinese-owned companies based in Hong Kong– including some which seem to act on behalf of the Chinese government – have been able to purchase satellites from American manufacturers.” The senators also allege — based on a Wall Street Journal article from April — that Beijing has used, and is using, the Boeing-built communication satellites to repress human rights within China.

Boeing’s swift response to the allegations first pointed that there are major factual errors in the letter to Pompeo, including the statement that Boeing has over the years sold nine satellites to AsiaSat. Spokesman Jerry Drelling told me today that Boeing has sold only two satellites to the Asia-Pacific communications provider: AsiaSat 3S, built by its legacy company Hughes Space and Communications launched in 1999; and AsiaSat 4 (also Hughes) launched in 2004 and still functioning. The license for AsiaSat 4 was renewed in 2017 by the Commerce Department.

The company’s official statement adds: “The State and Commerce departments over four administrations—and most recently in 2017—reviewed and approved export licenses for those two satellites specifically for the provision of commercial bandwidth services to the Asia region, including China.”

UPDATE BEGINS “We have received the letter and are currently reviewing it, in conjunction with our interagency partners,” a State Department official told me in an email today.

The Commerce Department did not respond to a request for comment. UPDATE ENDS

Rather than being built by Boeing, the other five birds in AsiaSat’s fleet were built by Space Systems Loral, now part of Maxar Technologies. Experts point out that both companies have been legally licensed to sell satellites to AsiaSat for years.

“Maxar satellites are subject to and controlled by either the Department of Commerce or Department of State. In conformance with all regulations, we protect our satellite technology meticulously and all communications of technical information with international customers are carefully controlled,” Maxar said in a statement provided today.

US law on commercial satellite exports has swung back and forth since the infamous Cox Commission report of 1996, that charged Loral and Hughes with aiding China’s military through identifying a satellite launch failure. In reaction, The 1999 National Defense Authorization Act (NDAA) moved commercial satellite export licensing authority from the Commerce Department to the Defense Department, under the Munitions List governed by the International Traffic in Arms Regulations (ITAR).

A plethora of studies over the years that showed a devastating loss of the US share of the global SATCOM market — including one done by Commerce with the help of the Air Force, the National Reconnaissance Office and NASA in 2014 that estimated lost sales opportunities between approximately $988 million and $2 billion from 2009 to 2012. The Obama Administration began an overhaul of the commercial satellite export regulations in 2013 (with the permission of the Republican Congress in the 2012 NDAA) that resulted in the transfer of authority for most commercial comsats to Commerce under a new category of the Export Administration Regulations (EAR).

The Trump Administration, in Space Policy Directive-2 issued in May 2018, ordered streamlining of licenses for commercial satellites, and asked the Commerce Secretary and the Director of the Office of Science and Technology Policy (OSTP), in consultation with the Federal Communications Commission, for a “report on improving the global competitiveness of the United States space sector through radio frequency spectrum policies [and] regulation.”

The Grassley-Ernst letter also erroneously suggests that AsiaSat is a majority owned company of the Chinese government. AsiaSat, headquartered in Hong Kong, is a listed company on the Hong Kong stock exchange. According to its 2018 financial report: “The majority of its shares are held by a private company, Bowenvale Limited (“Bowenvale”), incorporated in British Virgin Islands, with a 74.43% holding. Both CITIC Group Corporation (“CITIC”) and The Carlyle Group L.P. (“Carlyle”) have equal voting rights in Bowenvale, and in turn, enjoy equal voting rights in the Company.” While CITIC is a Chinese government investment firm, Carlyle is a US firm — and each have 50% of the above mentioned shares; non-Chinese companies make up the rest of the shareholders.

The letter seeks a response from Pompeo to respond to the allegations that Boeing has violated US law by July 10.