Life or death in wartime is horrifically random, subject to “fate, chance, kings, and desperate men,” but sometimes that randomness generates not tragedy, but miracles. Such is the story of Army Sergeant Roger Daniels.

On a patrol in Afghanistan last August, Daniels, then just 21 years old, took a bullet to the head and survived with just a concussion because his helmet stopped the high-powered 7.62 millimeter round – something the standard-issue Advanced Combat Helmet was never designed to do. Last Friday, after experts at the Army’s PEO-Soldier unit had spent a year studying the miracle helmet, Daniels got it back in a ceremony at Joint Base Lewis-McChord in Washington.

Daniels’ survival tells us a lot about luck – “I guess I just got lucky,” he told the Tacoma News-Tribune – but it also tells us a lot about technology. Over the past 12 years of war there has been a quiet revolution in military body armor, from helmets to breastplates to, yes, groin protectors that have saved countless soldiers from injury or death.

Daniels is not the only post-9/11 vet to cherish the armor that saved him, either. Just in June, for example, former Army Specialist Bryan Wagner was formally given a battered armor plate he had worn in Baghdad in 2007. A so-called “explosively formed penetrator,” the most powerful form of roadside bomb, wrecked his Humvee, ripped off his right leg below the knee, and slammed a chunk of the molten-copper penetrator into his side – at which point his armor stopped it.

Admittedly, Wagner’s torso armor, designed to stop 7.62 mm rifle rounds, was thicker than Daniels’ helmet, designed against 9 mm pistols. Admittedly, the copper penetrator had to punch through the Humvee’s armor before it could hit Wagner. But without the armor it would have killed him handily. What Wagner’s rifle-proof plate stopped that day was part of a projectile meant to kill, not individual soldiers, but entire armored vehicles.

Look closely at the photo below: the big green square is the piece of body armor, and the nasty twisted metal thing on the right is what it stopped. 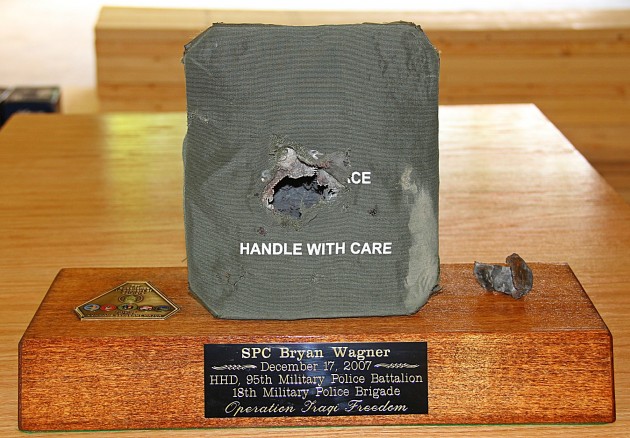 The armor plate that saved Spc. Bryan Wagner’s life, and the IED fragment that it stopped.

“How the hell…?” one reporter heard Wagner say as he examined the fragment and the armor plate that stopped it. “I’m really glad I was wearing it now,” he said. “I remember picking those plates up and not being very happy about them…because that’s extra weight to go with your combat load.”

The weight of all this armor — combined with everything else they carry — is a major problem. It slows US soldiers down – especially when chasing robe-wearing Taliban up Afghan mountainsides – and subjects them to fatigue and breaks their bodies down. But it also gives them new confidence and new tactical options in a fight.

“We roll into the canal… and foot by foot fight our way,” recalled Army Staff Sgt. Timothy Nein, telling me about a 2005 battle when he and Sgt. Leigh Ann Hester cleared an irrigation ditch of Iraqi insurgents. It was an action for which both soldiers received the Silver Star. Part of their success was the Americans’ level-headed marksmanship and the Iraqis’ appalling aim – “I remember thinking, ‘I cannot believe I’m not being hit right now,” Nein told me in a 2006 interview for National Journal – but part of it was their body armor. Instead of crabbing along sideways, presenting the narrowest profile possible to the enemy, Nein and Hester walked straight ahead, leading with their chests and trusting in their torso armor to protect them. “We keep our vests squared up,” Nein recalled, “[and] we did exactly what we were supposed to do: We kept pressing these guys until they were down.”

Modern automatic weapons make it possible for one skilled fighter to kill dozens or even hundreds of less able enemies, like Audie Murphy in World War II or Dillard “Carnivore” Jackson in Iraq, who claims a body count of over 2,000. But almost as important as the weapons is the armor that allows well-equipped warriors to shrug off the blows of lesser foes, like medieval knights or Homer’s brass-clad heroes in the Iliad.

Such body armor is a revolution in warfare – in the literal sense of “revolution” being that something comes back full circle to where it started. For millennia, since the invention of bronze, superior armor made a life or death difference in battle. Then came arquebuses and muskets that could punch through any metal a man could reasonably wear. Armor became dead weight – literally – except for a few elite cavalry cuirassiers who worried more about sabers than bullets.

After three centuries of most soldiers entering battle without armor, the trench warfare of World War I inspired both sides to try to revive it, but everything proved too heavy except for helmets barely able to stop shrapnel. Vietnam brought hot, bulky flak jackets, but again they only protected the wearer against grenade or artillery fragments, not from direct hits. Only at the end of the 20th century did the defense industry develop ceramic materials light enough to wear, just strong enough to stop a bullet, and when the Iraq War began in 2003, the US military was desperately short of them. Since then, the Pentagon has pushed out more and better body armor year after year.

Which brings us full circle to Sergeant Daniels. The Advanced Combat Helmet he wore that day in Afghanistan entered service in 2002 as a replacement for the 1980s-vintage PASGT Kevlar helmet made famous by the 1991 Gulf War. Since then the Army has added all sorts of protection from the blasts of roadside bombs (aka improvised explosive devices, IEDs), including protective padding to reduce the risk of concussion and tiny sensors to record the force of impact so doctors can better diagnose the injury. But when it comes to stopping bullets, the ACH from the beginning has only been able to stop 9 mm pistol rounds. That’s better than most helmets in modern history, but it falls far short of stopping the 7.62 mm round that hit Daniels.

(Yes, 9 mm is bigger than 7.62 mm, but that’s just the caliber: the 7.62s are longer rounds with more gunpowder, faster flight and higher impact. They are used in assault rifles and light machineguns rather than pistols).

Now, the Army and Marine Corps are working on a new Enhanced Combat Helmet that is designed to stop 7.62 mm rifle rounds, not just 9 mm. Built by California contractor  Ceradyne, the ECH uses new materials – essentially super-tough plastics instead of Kevlar-type fibers – to provide about 35 percent better protection without increasing weight. Under development since 2010, the ECH ran into some troubles in testing, which is understandable given the challenges of stopping a high-velocity bullet, but the services are set to start issuing them later this year. Ultimately, the Army, Marines, and Navy hope to buy about a quarter-million Enhanced Combat Helmets between them.

But no combat soldier actually has the new rifle-proof helmet yet, including Sgt. Roger Daniels. So what happened to him in August 2012? As far as anyone can tell after a year of study, Daniels’ helmet was a perfectly normal ACH: There was no manufacturing mishap with kryptonite that gave it super-strength.

Daniels himself speculates that the old adage that the Army has only two sizes of gear, too big and too small, may have actually helped him here. Tacoma Times reporter Adam Ashton, who interviewed Sgt. Daniels, told me that “Roger thought it helped that the helmet was a size too big, which he thought gave him some room for the bullet to bounce a little.” That’s plausible but a little unnerving: Apparently the round penetrated the helmet, losing a lot of velocity on the way, and (in Ashton’s words) “rattled around a bit,” causing “a concussion and some cuts.” But pending further details from the Army, it’s the best explanation that we’ve got for a battlefield miracle.