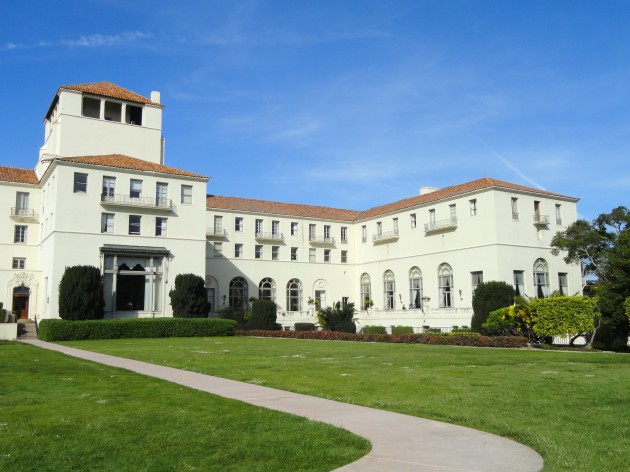 The Naval Postgraduate School in Monterey, Ca., has cancelled all classes during the shutdown.

So how hard is the federal shutdown hitting the US military?

“Walking around the building, I would say we’re probably at about a third of our staff right now,” said one military officer. (About half the Defense Department’s civil servants have been furloughed, but military personnel are still on duty). Of 26 people in her section, she said, “I counted out 19 furlough notices on Sunday, including my boss and my boss’s deputy.”

We can’t identify her or her organization. Why? “I haven’t cleared this discussion with our PAO [Public Affairs Officer], because our PAO is on furlough.” Yes, she added with a laugh, she’s well aware of the irony.

The Catch-22 of the current, surreal situation is that many of the people you’d like to ask about the shutdown aren’t available because of — the shutdown.

“Right now, in media relations, we’re down to three officers,” said an Army spokesperson. All nine civilians have been sent home — a 75 percent staff cut overnight. (Contractors are still coming in, but they don’t deal with press inquiries). Many Army public affairs offices at bases and commands around the country, he added, have no uniformed personnel or contractors at all, only civil servants. That makes it awfully hard to get information about what’s happening around the Army. “When we get queries and we call our counterparts,” he said, “they’re not there to answer the phones.”

The same is true for the Navy. The actual media desk in the office of the Chief of Naval Operations (CHINFO) is staffed, as it happens, entirely by uniformed military personnel, but that’s just six people. At other offices, commands, and bases, Navy public affairs relies heavily on civilians — same as the Army — and they aren’t there.

The missing-persons problem goes way beyond public affairs, however. Because the law governing shutdowns only “excepts” civil service personnel directly supporting military operations or other immediate life-and-death issues, the institutions hit the hardest are the ones that do the military’s long-term thinking.

For example, take the Naval War College in Newport, Rhode Island, often considered the most academically rigorous and intellectually innovative of the four service grad schools for future admirals and generals: Half of its faculty are non-exempt civilians, so in their absence classes have been simply canceled for almost 60 percent of the students, 324 of out of 545. The US Naval Academy in Annapolis, which trains young officers, has only canceled 20 percent of its classes, although that figure will rise if the shutdown lasts into next week. The Naval Postgraduate School in Monterey, California has simply cancelled classes altogether.

The Army War College in Carlisle, Pennsylvania, by contrast, has kept all its classes going, albeit without the normal number of instructors per seminar. The College had so far only outright cancelled such things as a Gettysburg “staff ride” — where military students walk the actual ground of the battle as they analyze it — and academic travel to conferences. The reason? Two-thirds of the staff are military or “excepted” civilians, so they’re still allowed to work, as are 90 percent of the students. The other 10 percent, however, are civilians from various agencies such as the Department of State, said one War College source: “We’re still sorting through which ones are furloughed.”

Across the Army’s Training And Doctrine Command (TRADOC), meanwhile, the senior generals are holding teleconferences every other day to figure out how many students to pull out of what courses and when.

There’s an administrative and accounting issue here that is causing real-world headaches. Some professional military education programs, especially for officers, take six months or more. Sending a student to these longer courses counts as a “Permanent Change of Station” (PCS) and the money to do so is spent up front. So while the shutdown means no more students can go to PCS courses, at least no one already enrolled has to drop out. But many other courses, especially for non-commissioned officers, last 20 weeks or less, after which the student usually returns to same unit they left, so those count as “temporary duty” — and TDY is funded on an ongoing basis. That means, said one ranking official, “you can cut them off and bring them back and save TDY dollars.”

“We’re still looking at the analytics,” the official told me. “Is it cheaper to leave you in place or bring you back?” As a rule of thumb, he suggested, a soldier who has completed 80 percent of a course might just skip the rest, be certified as fully trained (rounding up a little), and graduate early. At the other extreme, students who’ve just started will have to drop out and go home — if they can. In some cases, “they can’t go back there because there’s no job and no housing for them” at the base they came from, the official explained, and the base they’re supposed to go to next can’t accommodate them ahead of schedule.

“It’s a headache,” the official said. “You start thinking about the second- and third-order effects, from soldiers needing plane tickets home to their need to gain credentials required for promotion. There can be a long wait time for courses, he added: “Particularly for our National Guard folks, it may take them two to three years to get a slot in a class.”

Besides the long-term impact of cutting back professional education, the shutdown is disrupting all sorts of organizations that do strategic planning, concept development or analysis of the future force.

One in particular will horrify reporters who cover the military. “There are some important analytical efforts in support of the QDR [Quadrennial Defense Review] that are halted,” said one officer. “If this shutdown continues and the QDR timeline is not shifted to the right [i.e. delayed], they will make decisions without counter-arguments and supporting analytics.” That’s especially unnerving for the Army, which will face the biggest cuts, and for reporters, who make much of those analytic efforts during the QDR battles.

“The effect is as if we have taken a part of our brain that does some of the hard thinking about our force and turned it off,” said one Joint Staff officer. “The brain hasn’t stopped functioning, but it is staggering a bit as if there is just less oxygen getting to the right places. Keep that situation going long enough, and the results become very drastic.”

Perhaps it would help the Hill to get an authoritative analysis of shutdown’s impacts from the Government Accountability Office? Oops. “We all simply stopped working,” said one GAO staffer on furlough. “Auditing, interviews, data collection, report drafting, quality control on reports queued for release [all] simply stopped.”

“As for the Hill,” he added, “whatever information/oversight it will rely on to determine next steps will be dated”: A handful of GAO staff are excepted from the shutdown furloughs, but there aren’t enough of them to give Congress the information that Congress needs.

It’s a classic Catch-22: The people you’d need to analyze the full impact of the shutdown aren’t able to do it because of the shutdown. For now, in lieu of more detailed analysis, we’ll have to stick with a qualitative assessment: This sucks.