WASHINGTON: Despite the hype, the US Special Operations Command won’t issue Iron Man-style armor to its troops any time soon. But that’s not the standard by which to assess the success or failure of SOCOM’s much vaunted Tactical Assault Light Operator Suit initiative, the command’s chief weapons buyer says.

The value of TALOS lies at least as much in the individual technologies it spins off and in the new approach to innovation it pioneers, says James “Hondo” Geurts, “whether a fully powered, fully integrated suit occurs or not.”

“Everyone kind of had the visual of an Iron Man suit,” Geurts told the National Defense Industrial Association this morning. “It’s really about what capabilities can we bring to protect those guys.” 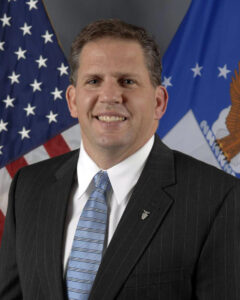 So while a complete super-suit is the long-term goal, Geurts told me and another reporter after his presentation, components of that suit can enter service as individual bits of kit today. There are experienced special operators working on the TALOS team, “and they’re identifying stuff, that, ‘hey, I could use that today,'” Geurts told us. “Then they’ll go work with the combat developers on the operational side and the program executive officers on the business side to go after that piece of equipment.”

Some promising examples: non-lethal weapons, new armor materials, more compact communications gear, advanced night vision, and “3-D audio,” Geurts said. What’s that last one? It’s new radio headsets that give the wearer directional cues: If the comrade calling you on the radio is to your right, for example, you hear him more strongly in your right headphone than in the left. It’s a subtle edge but it could keep troops from getting fatally confused mid-firefight, preventing them from, say, shooting a colleague by accident.

These modest spin-offs don’t mean TALOS has neglected its central ambition. The project has already tested unpowered exoskeletons — wearable, jointed frameworks that simply take the weight of equipment off a soldier’s body — and it’s recently awarded contracts for powered models — which actively augment the wearer’s strength.

In the bigger picture, Geurts said, the value of TALOS is two-fold: “It’s about what we’re inventing” — the technologies — “and about reinventing how we invent things” — the process.” The TALOS team has brought industry, SOCOM civilians, and troops together in a “marketplace of innovation” where they can match new technologies to tactical problems without the usual bureaucratic barriers, Geurts, “as opposed to a standard ‘let me put an RFP out and a year from now you give me your answers.'”

Even at the relatively nimble SOCOM, the traditional process can’t keep up with the rapid advance of modern technology, so “we’re working hard on other means, other practices that we’re piloting with TALOS,” Geurts said. If it works, “we can apply that tool to a variety of different problem sets outside of TALOS.”