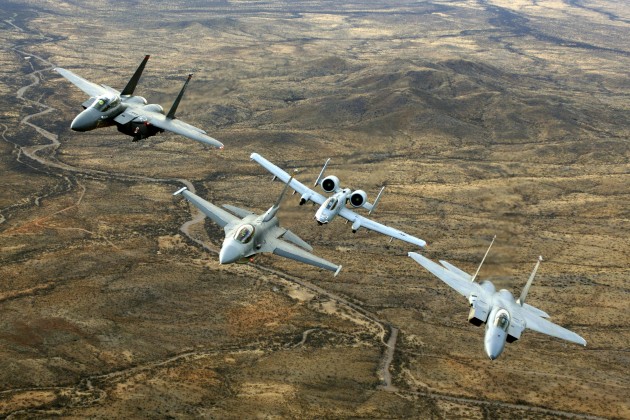 [UPDATED with Air Force release] This afternoon, the Air Force released a new strategy for “Strategic Agility,” the culmination of months of research to create an overarching framework to forecast the capabilities the US Air Force must have for the next 30 years. The Air Force’s strategy and the term itself was inspired by a 2013 Stimson report titled “Strategic Agility” which documented the strengths and limitations of US force in the 21st century. In the piece below, two contributors to that report, Stimson scholars Barry Blechman and Russell Rumbaugh, detail both the strengths and shortcomings found in this new strategic approach. — the editor.

The myriad of conflicts raging worldwide right now would pose a challenge to any defense strategy. From Russian aggression in Ukraine and China’s belligerence in contested waters to a particularly violent flaring of the Israel-Palestine conflict and Iraq’s internal chaos, these crises feature open violence each of which may require a military response. Yet, a military response to any of them would be unlike the response to any of the others. As the only global power, the United States must somehow adroitly orchestrate these disparate responses.

Compounding the difficulty, the military services are still scrambling to create coherent narratives for what they will do in the future now that the decade-long clear priority on Iraq and Afghanistan are ending even as they have less money to do so. This fragmented strategic situation obviously calls not for a single answer but an agility to offer many answers simultaneously.

The Air Force this week is grabbing the obvious solution and promising it will provide strategic agility in a new strategy for the service. They promise an overarching theme nimbly tailored to each specific situation. Just what anyone would want when confronted with real crises all with unclear ways to influence them for the better.

They are not the first ones to pursue this wise school of thought. Last year we organized a working group for the Peterson Foundation, the Stimson Center’s Defense Advisory Committee, which assembled 17 of the nation’s elite national security minds from the military, government, and academia to put forward recommendations for a forward-looking national security strategy. At the core of the analysis was a concept and term we first coined: strategic agility.

Put plainly, strategic agility as a policy argues for relying on the U.S.’s comparative military strengths, many of which also just happen to reside in the Air Force. The Air Force provides awareness through its satellites as well as manned and unmanned surveillance aircraft. It provides precision strike with its long-range bombers and forward deployed fighters. It provides global reach with its aerial refueling. And, it can choreograph all of these moving parts with airborne and ground-based command and control.

Of course, none of these capabilities are limited to just the Air Force. The Navy, Army, and Marines all have the complementary or alternative ability to do much the same. But the Air Force is uniquely responsible for all of them, and—just as importantly—not responsible for other countervailing capabilities like the long-term sustained land operations the Army provides or the constant, visible presence the Navy provides.

Here then is the rub: the capabilities of strategic agility are not a panacea. They will not solve these crises once and for all. That is the hard truth contained in our proposed strategy. Though the United States is a global power in a way no other country is; though the United States enjoys a conventional military superiority no other state has enjoyed, many of these problems are simply not solvable by military means. And the solutions military means may provide are messy, protracted and even ambiguous as the situations in Iraq and Afghanistan illustrate today all too well.

Embracing strategic agility requires not having an answer for everything but rather admitting that these crises are problems to be managed not resolved.

Today’s foreign policy debates settle too quickly into trite calls to do something. There are steps the United States can take. But these steps may not be as final as sometimes promised. We should not be afraid of the use of force. The United States has too rich a kit of military tools to ignore them when faced with crises. But neither can we believe there is an immediate military solution, maybe even any kind of solution, to many modern 21st century crises.

Barry Blechman is a Distinguished Fellow and Co-Founder of the Stimson Center. Russell Rumbaugh is Director, Budgeting for Foreign Affairs and Defense, and Senior Associate at the Stimson Center. They authored Stimson’s report Strategic Agility: Strong National Defense for Today’s Global and Fiscal Realities.