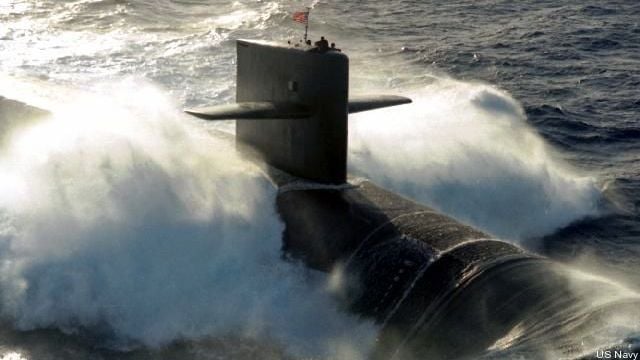 CAPITOL HILL: It’s a problem the US Navy wants to have, but it’s still a problem. If the service gets enough money both to build its top priority, the Ohio Replacement Program nuclear missile submarine, and to keep producing its vaunted Virginia-class attack subs, then so much new work will be hitting the shipyards so rapidly that they’ll be hard-pressed to ramp up production fast enough.

There are just two shipyards in the country that can build nuclear-powered submarines, Virginia’s Newport News and New England’s Electric Boat, which along with their network of specialized suppliers have recently ramped up to building two Virginias a year. But the Navy wants to start buying a bigger, more powerful, and correspondingly harder-to-build version of the Virginia no later than 2019. Then in 2021, the Navy will officially start its first Ohio replacement. That’s not just another sub: “An Ohio is about twice a Virginia in terms of the workload,” Assistant Secretary of the Navy Sean Stackley told reporters yesterday.

“It’s a fairly steep growth [in production] compared to what it’s been in the past 10 to 20 years, absolutely, ” Stackley said when I pressed him on the point.

Is it a potential bottleneck in production? 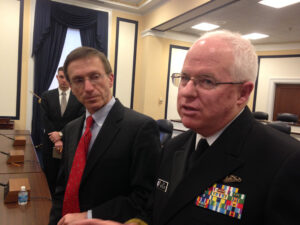 “I’m not using the term bottleneck,” Stackley said. “We’re ramping up to two Virginias a year. We’ve got the plans to continue to ramp up with the introduction of VPM (the Virginia Payload Module, which adds more missile launchers to the Virginia design) and Ohio Replacement. So we have to manage that….because it’s skilled labor we’re going to need, it’s investments in facility upgrades at both of our builders.”

The USS Ohio being converted from a nuclear missile submarine (SSBN) to a conventional missile one (SSGN). By 2028, all four SSGNs will have retired.

On the upside, having many subs with a modest number of missiles, instead of four subs with 154 each, provides more flexibility and better fits the Navy’s new “distributed lethality” doctrine, Stackley noted. On the downside, quantity has a quality all its own. At 28 missiles per Virginia Payload Module, and one VPM sub planned per year, replacing the lost capacity of the SSGNs will take exactly 22 years.

So Stackley has subordinates studying whether it’s possible to start VPM production earlier than the current planned date of 2019, he told the subcommittee. That’s a new aspect he’s added to a broader ongoing study of how the shipbuilding industrial base can handle the ramp-up.

“I would ask you to give us a couple of months to complete our review,” Stackley told the subcommittee, “and we’ll be ready to come back and give more specifics in the March-April timeframe.”

“Mr. Secretary, we don’t have a couple of months,” replied the sub-friendly chairman, Virginia Republican Randy Forbes. (There’s a big push in Congress to get the year’s bills done on time for a change, Forbes reminded me on Tuesday). “We just want to help you try to close those gaps, so anything you could get for us in a quicker timeframe at least for this year might be helpful,” Forbes said gently. “I know you can only do what you can do.” 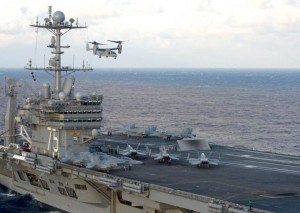 V-22 landing on an aircraft carrier.

Alongside submarines, another growth area for the Navy is the V-22 Osprey tilt-rotor aircraft. Originally built as a troop carrier for the Marines — who pressed ahead with development for decades despite fierce criticism and deadly accidents — the V-22 has proven so versatile that the Navy decided to buy it for supply runs to the fleet. (Breaking Defense’s own Rick Whittle broke the story of the Osprey’s selection for the “carrier onboard delivery” mission). That wasn’t an easy call, Stackley told reporters, but it was the right one.

“I actually went back and took a second look at the results [of the Analysis of Alternatives] — and a third look,” Stackley said. After examining everything from extending the service lives of the current C-2 Greyhounds, to buying a new fixed-wing aircraft, to buying the Osprey and using it for a wider variety of missions than traditional COD, “V-22 was the answer,” Stackley said. “Having looked at this several times, I’m firmly planted there, and I’ll be honest, I didn’t start there.”

“it was a shock,” agreed Mulloy. “Everyone was thinking COD, COD, COD,” but the analysis “opened the aperture” beyond traditional supply runs between fixed bases ashore and carriers at sea. The V-22 can land on helicopter-style on many kinds of ships and bases, exponentially increasing the number of routes it can fly.

The Navy’s also thinking outside the box in how it trains and mans its V-22 COD squadrons. Instead of standing up a new Navy training unit, the Navy will send its pilots to the existing Marine V-22 center. What’s more, since Navy COD aircrews have to keep flying the current C-2 aircraft until they’re replaced, the Marines will man the first Navy V-22s. Specifically, said Mulloy, “they’ll be Marine Corps Reserve pilots, flying the first set of carrier deployments as we train Navy pilots.”

The Marines, meanwhile, love that Navy purchases of their favorite aircraft will drive down the cost per V-22 and broaden the support infrastructure. The Navy COD variant will also have upgrades, such as larger fuel tanks, that the Marines may one day adopt, said Mulloy. 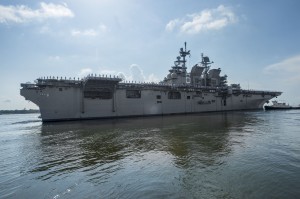 The other big thing the Marines want the Navy to buy more of is amphibious ships. There the service is trying yet another unconventional expedient: linking the competition to build the new-design big deck amphib, LHA-8, with the competition to build six oilers. California’s NASSCO shipyard and Mississippi’s Ingalls will both bid on both programs, Stackley explained, and then the Navy will award the oilers to one and LHA-8 the other. “Between those two major shipbuilding programs, they each have to get one of them,” Stackley said.

The six supply ships are roughly equal in value to the single amphib, reports Megan Eckstein of the US Naval Institute. But the goal isn’t equality, it’s survival: Both shipyards depend on Navy work to stay in business, and the Navy needs both shipyards.

The service routinely conducts this kind of managed competition to keep the five remaining major shipyards alive: It splits work on Virginia submarines between Electric Boat and Newport, and it divides up DDG-51 destroyers between Ingalls and Bath Iron Works in Maine. But coupling two contracts for two different kinds of ships is unusual.

Isn’t it a foregone conclusion that Ingalls, which built LHA-6 and is building LHA-7, will get the LHA-8 contract? Won’t NASSCO, which only builds support ships, inevitably will get the oilers? Not so, said Stackley. NASSCO’s done impressive work on innovative vessels, he said: “We think they’e got the skills, the capacity to be able to compete.”