WASHINGTON: The Aerospace Industries Association is routinely ranked among the top influence shops in this town. Its leader plays an important role in ensuring AIA speaks and acts with a clear and guided voice. The association’s leader for the last seven years, former FAA administrator, Marion Blakey, is leaving and the association’s large companies, who dominate the organization, are beginning the search for a new leader.

I hear that AIA will not hire a search firm but, as it usually does, is leaving it up to its members — the Lockheeds, Boeings, United Technologies and the Northrop Grummans — to find the right person. An executive committee effectively runs the association and it put one smaller company on the search group. But the big guys pretty much rule. Also, a well placed source says the association will not appoint an interim leader.

For our readers, the big question is will the civilian aerospace side win, as it did when Blakey was selected, or will the national security side of the aerospace industry prevail? 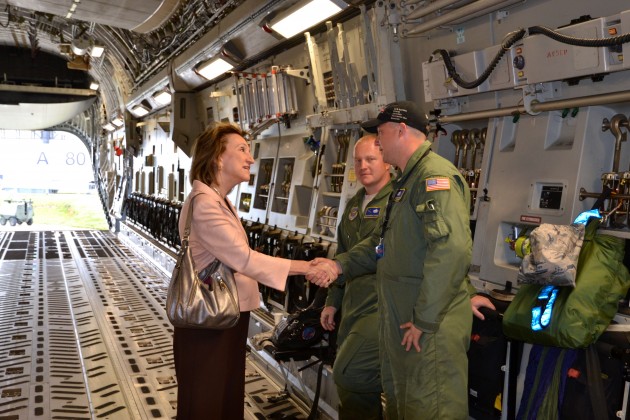 Either way,.the perfect choice to replace Marion — but one who almost certainly won’t be interested — would be former Rep. Eric Cantor, whose primary loss last year stunned the GOP. Loren Thompson and a lobbyist who must go unnamed said Cantor would be perfect because of his stature as a pragmatic former House leader who knows defense issues. But AIA is believed to pay its leader about $1 million per annum and that just isn’t enough to lure someone like Cantor, they agreed. The Washington Post reported that Cantor won’t take home that much pay in his new job in his first year — but he’s getting $1 million up front in stock on top of a reported $800,000 in pay and bonuses, and he’s opening a new DC office for his financial services firm. One assumes his bonuses will grow from the first year’s relatively paltry (by financial industry standards) $400,000.

“I just don’t think there’s any way he would do it, nor could they afford it,” the lobbyist opined.

One of the big questions facing the next leader of AIA is whether to forge ahead as a traditional — if enormous — association or greatly beef up its Political Action Committee and go the way that the Heritage Foundation has gone with its Heritage Action for America to actively influence specific lawmakers to do specific things. By law, of course, associations aren’t allowed to “lobby;” they may only “educate.” When you create an organization such as the new Heritage group you can pump money to those you like, monitor the votes of senators and House members and give them ratings according to how much they do what you want them to do.

“The association has to decide, do they want to be more political?” the lobbyist said. The big companies, who all boast substantial and active lobby shops, may worry that their diverse interests will be difficult to reconcile should they create a lobby shop. AIA has historically been most effective when it engages with the Hill on issues of broad policy that unite its disparate members, such as arms export or acquisition reforms. But the trend among think tanks and some associations does seem to be toward more active direct lobbying.

For some perspective, The Hill ranked United Technologies ($5.8 million), Boeing ($3.76 million), Northrop Grumman ($3.54 million) and Lockheed Martin ($3.37 million) and General Electric ($3.36 million) among the top 25 organizations lobbying the federal government for 2014. They are all AIA members.Will they be comfortable juggling another actor on that front? Will they judge they can find enough common ground with competitors to make the leverage of an AIA lobby shop worth it?

We at Breaking Defense will miss Marion, who forged a close partnership with a fledgling publication at its beginning. As a member of our Board of Contributors, she regularly wrote op-eds for our readers about the pressing issues facing its members.