The Case For LCS: Searching For The AirAsia Plane

The Littoral Combat Ship Fort Worth joined the search for the remains of Air Asia Flight QZ8501. This grim mission marked more than a real-world test of a new and controversial class of ship. It also shows why the Navy needs something like LCS at all.

The Fort Worth started working this weekend with the USS Sampson, an Aegis guided missile destroyer. The two vessels are very different. The LCS is small and lightly armed — so much so, in fact, that Defense Secretary Chuck Hagel has ordered a redesign — with a length of 388 feet, a displacement of 3,400 tons, and a crew of only 50 sailors. The destroyer (designated DDG-102) boasts almost 100 missile launchers, a length of 509 feet, 9,300 tons displacement, and a crew of over 350. Many naval experts sneer at LCS’s inability to do what destroyers can, from protecting other ships against enemy aircraft to surviving a cruise missile hit. But in operations like this recovery mission, which occupy a great deal of the Navy’s time, LCS can do as well as the big ship or better at a fraction of the cost — freeing up those high-powered vessels for high-threat missions. 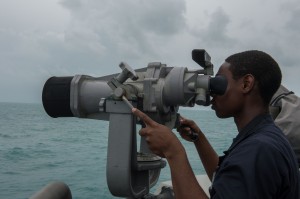 A sailor on the Fort Worth searches for Air Asia debris

LCS lacks a destroyer’s high-end Aegis radar system, for example, but in the search for floating debris, both ships are relying primarily on sailors’ eyes. Aircraft are crucial to the wide-area search as well, and each ship has about the same airpower. Specifically, the destroyer has two MH-60 Sea Hawks, which are manned aircraft, while the LCS has a single Sea Hawk and two robotic MQ-8B Fire Scouts, which don’t have the advantage of a human brain onboard but which can also stay out longer than a human crew. In this mission, where endurance matters more than adaptability, the unmanned aircraft arguably give LCS an edge. Now, an Aegis destroyer could swap out a Sea Hawk so it could carry unmanned aircraft too; indeed, an upgraded Fire Scout drone was recently tested aboard the destroyer Dunham. 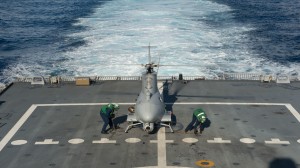 An MQ-8B Fire Scout drone aboard LCS-3 Fort Worth

But LCS has one advantage in this search a destroyer can’t replicate: Precisely because it’s a smaller ship with much less draft — 14 feet instead of 31 — the Fort Worth can better navigate reefs and shallows around South Asia’s innumerable islands. That’s the environment LCS is built for, in fact: The technical term for these shallow waters, “the littorals,” is what gives the Littoral Combat Ship its name.

LCS’s many critics charge it doesn’t live up to the second word in its name, “combat.” LCS is nowhere near the warship that a destroyer is. But the Navy designed it primarily for supporting roles on the margins of the main battle, like minesweeping, sub-hunting, and fending off small attack craft — not slugging it out with other ships or launching missiles.

And in peacetime — which is most of the time — the Navy fleet’s main mission is what Navy officers call “presence.” That means showing the flag, visiting foreign ports, training with allies, reminding adversaries that the America is on patrol — and, when necessary, responding to disasters to help search for the dead or care for the living. Those are missions a small, lightly armed ship with shallow draft can do as easily as a bigger, more heavily armed one. Whether you’re the US Navy or Woody Allen, 80 percent of success is still just showing up.