The Navy Is Back In Iceland, But Left Its Carrier At Home 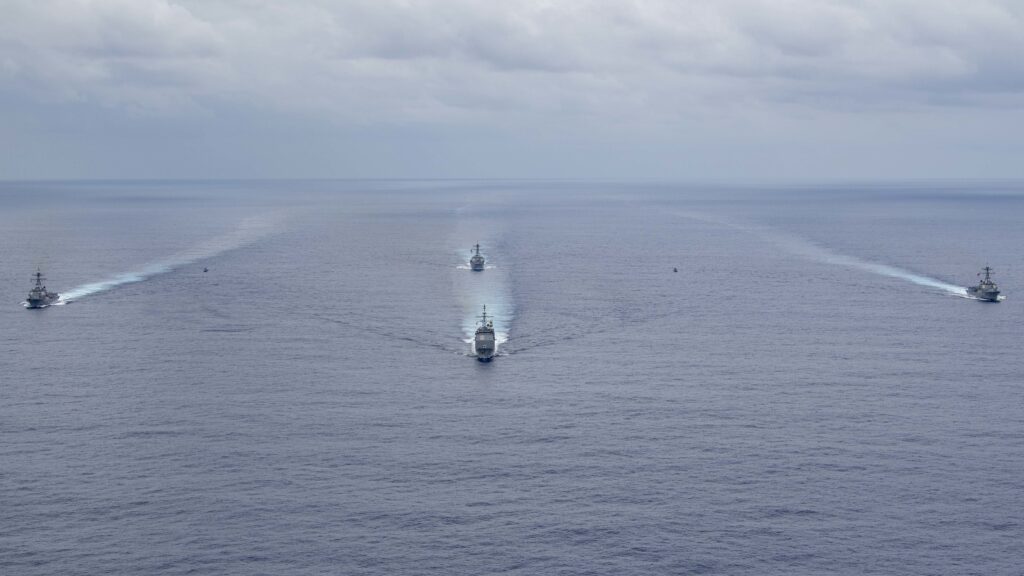 THE PENTAGON: Two Navy warships that left port in Virginia earlier this month have sprinted north, and are currently operating in the Arctic in an ambitious test of the Navy’s desire to deploy faster, leaner, and with more flexibility.

The destroyer USS Farragut and cruiser USS Normandy are plugged into a temporary headquarters hastily assembled in Keflavík, Iceland, and are slated to put crews through their paces in the rough seas and extreme temperatures of the Arctic in the coming days.

The ships are operating under the newly resurrected 2nd Fleet, and are part of the Surface Action Group which left Norfolk Va. earlier this month without the USS Harry S. Truman aircraft carrier, which remains in port hobbled by electrical issues. The Navy doesn’t have a timeline for when the Truman will be ready to deploy.

Vice Adm. Andrew Lewis, head of the 2nd Fleet, called the unexpected lack of the big deck “a real positive” for the Arctic exercise, since it is forcing the Navy to operate outside of its usual Carrier Strike Group structure.

“We’re transitioning to a fleet-centric way of operating as opposed a group way of operating,” he said, meaning the Navy wants ships to operate as part of the whole fleet, and pull in assets as needed, as opposed to a more static strike group that travels in packs.

“We talk about mission command quite a bit, being able to issue orders and issue changes to the on-scene commanders,” he told reporters on a phone call from Norfolk. And this new exercise fits the bill. The absence of the Truman puts more emphasis on the expeditionary Maritime Operations Center in Keflavík, Iceland to coordinate the activities of a multitude of warships and P-8 surveillance planes operating as part of the exercise.

The Icelandic effort is meant to prove out a new, more fluid way or operating that seeks to “decentralize decision making and allows the on-scene commander to take the initiative, so that way we don’t over-control our forces,” from large headquarters hundreds or thousands of miles away Lewis said.

The SAG, which also includes guided-missile destroyers USS Lassen and USS Forrest Sherman, will fly aircraft in the Arctic from Helicopter Maritime Strike Squadron 72, according to a Navy release.

The 2nd Fleet has long been described by Lewis and other Navy officials as a small, adaptable force heavy on intelligence assets and ready to fight anywhere from the Arctic to the Mediterranean. In many ways, it’s like the 3rd Fleet, INDO-PACOM’s maneuver arm in the Western Pacific, and has been designed to bolster the 6th Fleet around Europe. The North Atlantic deployment is meant to build the muscle to be able to quickly deploy a small command group to command and control US and NATO ships and aircraft.

About 30 sailors staffing the operations center in Iceland are guiding the ships, while relaying information with Norfolk and the Sixth Fleet in Naples, Italy. Lewis said that’s a far cry from the 500 people aboard the command ship Mount Whitney, from which he led  the Baltops exercise in the Baltic Sea this past summer.

The expeditionary operations center concept is designed to be temporary, with no permanent operating location in Europe planned for 2nd Fleet.

Given the increased Russian activity in the North Atlantic, Iceland has become an object of increasing interest for US policymakers inside the Pentagon. Last month, a B-2 bomber landed in the country for the first time, and over the summer, the Pentagon unveiled plans to expand and upgrade runways and construct temporary housing for troops at Keflavik. The plans, outlined in documents posted to a government contracting Website in July, build on a previous effort to begin flying more P-8 surveillance sorties from the same airfield. Earlier this month, Vice President Mike Pence visited the island nation, as well.