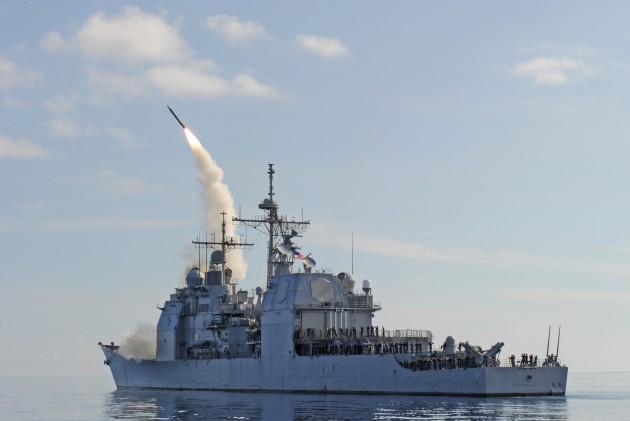 The Navy, is, hands down, the service in the best shape for 2014. Every act of belligerent idiocy from Beijing – and there’ve been a lot of them lately – makes the Navy budget an easier sell. In stark contrast to the Army, the Navy has the central role in the new Pacific-focused strategy, a high-tech threat justifying high-cost programs, a highly visible role in peacetime engagement around the world, and, perhaps most crucial, a clear set of missions.

Submarines are the spearhead of the Navy’s Pacific vision, but that’s not surprising given that the Chief of Naval Operations is a submariner. What’s less expected is how intensely Adm. Jonathan Greenert has gotten religion on electronic warfare and cyber, two things submariners historically don’t have to deal with. (Of course, the Navy boasts a redoubtable history as a service on the cutting edge of intelligence, which puts them squarely in the park for cyber operations.) Greenert sees those  as two sides of the same shield, a way for aircraft and surface ships to hide using the electromagnetic spectrum just as submarines have long hidden beneath the waves and under thermoclines.

The third point of Greenert’s trident is something unexpected not just for a submariner but for the Navy, which is traditionally obsessed with big, costly and highly capable combatants – battleships before 1941, aircraft carriers thereafter – at the expense of less exciting vessels. But Greenert is pushing for larger numbers of cheaper ships, ships he admits are less battle-worthy, to handle the low-threat regions of the world and thus free up the submarines, destroyers, and other high-end combatants to concentrate on the Chinese dragon.

In some ways, it’s actually easier to see what Greenert is doing from Beijing’s perspective than from Washington’s. Imagine yourself a People’s Liberation Army strategist standing on the shore of China looking east.

The first line of US naval forces confronting you, you can’t even see, though you know they’re out there: nuclear-powered submarines, especially the newer Virginia class that both the Navy and key Congressional backers insist the government must keep buying at a rate of two a year. China’s own sub fleet outnumbers but hardly outclasses the American ones, while China’s most dangerous weapons, its land-based missiles, can’t hit submarines. US subs can attack targets both at sea and ashore with a mix of missiles and torpedoes, and just as important they can spy, unseen, on Chinese forces – including, in the near future, by launching drones – and report back to the rest of the fleet.

The second line, at least, is on the surface – though Greenert’s emphasis on electronic warfare may well hide it behind a buzzing confusion of jamming and deceptive signals: the Arleigh Burke-class Aegis missile destroyers, which will be the workhorse of the fleet well past 2050. The surface ships are easier targets than the submarines but can carry far more missiles, not just for attack, but also for defense against incoming aircraft and ballistic missiles, making them important protectors of the fleet and bases on land.

Only in the third line do you get to aircraft carriers, shielded by the Aegis ships and by distance: While carrier advocates insist they can survive a war of long-range missiles, there’s enough doubt that few commanders would push them too far forward. That fact helps explain Greenert’s emphasis on new long-range and unmanned aircraft that can outrange conventional fighters.

Beyond these three lines containing China – or any lesser power that either replicates or purchases Chinese equipment – you’ll find the rest of the Navy doing missions around the world: amphibious warfare ships deploying Marines to disputed islands or disaster zones, Littoral Combat Ships clearing the seas of mines or small armed boats, and, increasingly, ships crewed not by Navy sailors but civilians.

“We have a need for 35 amphib[ious] ships,” Adm. Greenert told reporters at a US Naval Institute conference back in October, but the Navy just cannot afford that many. So to free up battle-worthy amphibs for missions in high-threat zones – say the South China Sea or the Persian Gulf – the Navy is increasingly building non-combatant ships to handle low-threat missions: the small Joint High Speed Vessel (JHSV), derived from an Australian ferry, and the large Mobile Landing Platform (MLP), derived from a commercial oil tanker. (Some MLPs will have flight decks, upgrading them to something called an Afloat Forward Staging Base or AFSB).

Operated by Military Sealift Command and crewed by civilians, the JHSVs and MLPs are cheaper substitutes for the amphibs and can perform just as well in peacetime missions like disaster relief or even wartime missions against poorly armed opponents. Said Greenert, “they resonate better with the type of operation that we are currently using very expensive high tech big capacity ships to do, when we could use a less expensive, very functional ship.”

Greenert thinks much the same way about the Littoral Combat Ship. Originally conceived as a close quarters “street fighter” for shallow water warfare, the LCS is instead becoming a kind of Swiss Navy Knife, equipped with plug-and-play equipment modules – still in development – that let it clear mines, hunt submarines, shoot down small fast attack boats, or, if you take the modules out, just carry stuff around at the same speed as the JHSV but with better protection. The LCS is significantly more fragile than an Aegis destroyer, an amphib, or even some of the older frigates it is replacing, but Greenert sees it as sufficiently survivable – and much cheaper – for most Navy missions around the world. That, in turn, lets him focus his limited number of high-end ships against the high-end threat.