WASHINGTON: The careful diplomatic stagecraft behind President Barack Obama’s recent European visit to celebrate the 70th anniversary of D-Day and to rally the Western alliance against Russia’s aggression in Ukraine was all but swept aside by strong new currents in geopolitics. While Obama talked tough in Poland to reassure NATO’s vulnerable eastern members, Russian President Vladimir Putin happily visited with his Western European friends who buy huge quantities of natural gas from him.  French President Francois Hollande not only hosted Putin at a dinner, he refused to cancel a $1.6 billion sale of warships to Moscow.Meanwhile, as Putin and Hollande dined in comfort at the Elysee Palace, Russian special forces were supporting an offensive by pro-Russian rebels in eastern Ukraine that overran a key border control headquarters and threatened to open a land corridor between Russia and the recently annexed province of Crimea, home to Russia’s Black Sea Fleet.

The Chinese, sitting on Russia’s southern and eastern flanks, did not miss this split in the NATO alliance. Chinese President Xi Jinping and Putin agreed in Shanghai on a joint statement papering over any concerns that the PRC might have about Moscow’s intervention in Ukraine, and the two countries signed a massive $400 billion energy deal to seal what both sides hope is a budding counterweight alliance to the West.

While Obama spoke in Europe of Russia’s perfidy and the need to strengthen NATO, Beijing celebrated the 25th anniversary of the Tiananmen Square massacre of pro-democracy demonstrators by eliminating virtually all domestic dissent. Perhaps most tellingly, as Putin attended D-Day celebrations, a high-ranking Chinese general told a regional security conference in Asia that U.S. inaction in Ukraine was an unmistakable symptom of America’s strategic “erectile dysfunction.”

“Withdrawing from wars, especially where there is not a clear-cut victory, is tricky business,” and it’s difficult to “avoid sending the signal that you’re disengaging not just from the wars, but from your broader international responsibilities,” former Defense Secretary Robert Gates said in a recent talk at the Council on Foreign Relations. Former President Richard Nixon and his Secretary of State Henry Kissinger managed it for a time after Vietnam with their bold diplomatic outreach to China, effectively splitting the communist bloc at a moment of U.S. vulnerability. “We had better relations with the Soviets, and better relations with the Chinese, than they had with each other,” noted Gates, a Kissinger protégé. “There are no such opportunities now.”

Indeed, Moscow and Beijing have rejected what they view as the United States’ aggressive post-9/11 doctrine of regime change and democracy promotion. With the US withdrawals from Iraq and Afghanistan, and our failures to act boldly in Syria and Ukraine the Chinese sense an opportunity to push back against U.S. power. That is also the subtext to Putin’s forceful move to keep Ukraine in Russia’s strategic sphere of influence as a buffer against the West, and China’s aggressive actions in pressing claims to disputed islands and airspace in its near abroad.

In a recent speech at West Point, Obama made a strong case that the United States still stands firmly atop the global pecking order. The U.S. military has no peer, our economy remains the largest in the world, new drilling technologies make the long-sought goal of U.S. energy independence suddenly plausible, and, as Obama noted, from Europe to Asia “we are the hub of alliances unrivaled in the history of nations.”

“So the United States is and remains the one indispensable nation,” Obama said, resurrecting a description of American power coined by the Clinton administration in the unipolar moment of the post-Cold War 1990s. “That has been true for the century past, and it will be true for the century to come.”

In arguing that rumors of American decline are in some cases greatly exaggerated, Obama has a point. In his recent book, “Still Ours to Lead: America, Rising Powers, and the Tension between Rivalry and Restraint,” author Bruce Jones notes that of the top 20 economies the world, 15 of those countries are U.S. allies. Equally important, the potentially challenging powers often referred to as the “BRICs,” (Brazil, Russia, India and China) face a dilemma as they attempt to elbow their way into more prominent positions in international affairs: their economic ascent and well-being is dependent on a stable world order underwritten by U.S. power. Thus they cannot successfully challenge U.S. leadership without undermining their own interests.

“I think the Obama administration is right to play the long game, recognizing that when it comes to managing the challenging ascent of the BRIC countries, even the most powerful country in the world must make tough choices in terms of when to lead, and where to focus its resources and energies,” Jones, a senior fellow at the Brookings Institution, said in an interview. “It’s important to note, however, that in Europe, Asia and the Middle East, the only effective deterrence to regional rivalries and conflicts is still U.S. military power, and the willingness to use it.”

Putin apparently believes it when he says the breakup of the former Soviet empire was “the greatest geopolitical catastrophe of the 20th century.” He rejects outright the post-Cold War expansion of Western military and economic alliances (NATO and the European Union, respectively), as well as the U.S. strategic goal of a “Europe whole and free” that undergirds it. He opposed U.S. actions against allies and has drawn a red line against what he sees as Western encroachment in Russia’s “sphere of privileged interests” in the former Soviet space. With Russia’s 2008 invasion of Georgia and this year’s annexation of Crimea, Putin has demonstrated a willingness to use military force to defend those red lines.

“Putin is the single most powerful leader in the Kremlin since [Joseph] Stalin, because he doesn’t even have to deal with the [communist-era] Politburo,” said Strobe Talbott, who helped manage U.S.-Russian relations in the 1990s as a senior State Department official in the Clinton administration. “So the largest country on the planet in now engaged in territorial expansion and aggressive nationalism, and that country also happens to be one of the two major nuclear weapons powers,” said Talbott, speaking recently at the Brookings Institution where he is president. “That’s taking us back to the geopolitics that got us into two World Wars in the 20th century, and made a hash of the late 19th century.” 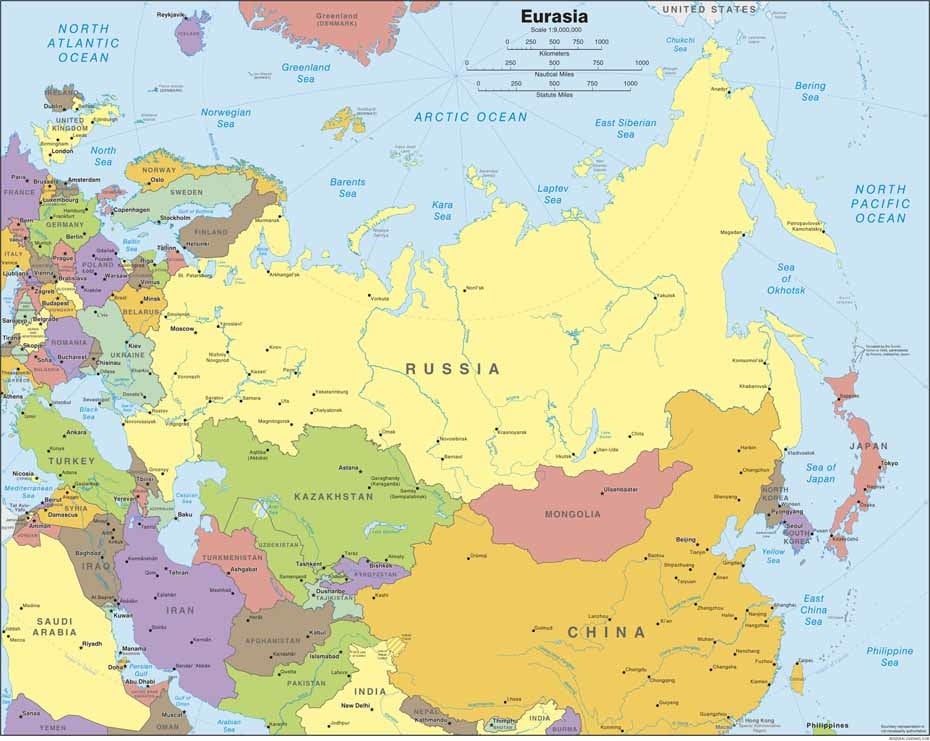 While Russia rejects the U.S.-led world order, China is challenging it as a rapidly rising power that demands more influence in international affairs. With its sustained and meteoric economic growth China has replaced Japan as the world’s second largest economy, and it may surpass the United States as the number one economic power this decade. Beijing has increasingly thrown that power around by staking claims to disputed islands in the South and East China Sea, proclaiming an air defense zone that no one recognizes, and pushing back against the U.S. military presence in Asia.

On a visit to China last year, Gen. Martin Dempsey, chairman of the Joint Chiefs, witnessed first-hand the complexity of maintaining a stable Asia-Pacific order at a time when Beijing is chaffing against its constraints.

“When I met with my Chinese military counterparts they said, ‘This is great, we’re going to take a blank sheet of paper and build a new relationship.’ And I replied, ‘Well, not so fast.’ It just so happens the United States already has some writing on our paper, so it’s not blank,” Dempsey told me in a recent interview. For starters the United States boasts historic treaty alliances with South Korea, Japan, Australia, and the Philippines. “And I said, ‘Surely you wouldn’t ask us to ignore those relationships?’ Well, of course the Chinese would love for us to ignore them!” said Dempsey. The United States has no choice but to try and manage those complicated relationships and a patchwork of controversial territorial issues in the Asia-Pacific region, he said, “with a China that’s rising in the international order, and Chinese leaders who may not feel that they’ve had a sufficient voice in establishing that order.”

In times of East-West tensions in the post-Cold War era, Moscow and Beijing periodically flirted with a strategic partnership as a counterweight to the U.S.-led transatlantic alliance. Most notably that occurred during NATO’s Kosovo campaign in 1999 against Moscow’s ally Serbia, which included the accidental bombing of the Chinese embassy in Belgrade; in the run-up to the Iraq invasion that was opposed by both Moscow and Beijing; and during the current crises in Ukraine and the South China Sea that prompted the recent signing of an energy pact between Russia and China.

Natural impediments have prevented a lasting strategic alliance between China and Russia, including their own territorial disputes in Siberia; economic trade between Russia and Europe, and between China and the United States, that far outweigh their trade with each other; and the strategic dichotomy between a revisionist power intent on reversing the current world order, and a rising power focused on bending it to Beijing’s will.

“In the 21st century of globalization, the major powers like the United States, Russia, China and Europe are bound together by tightly integrated web of mutual economic interests,” said Nicholas Burns, director of the Future of Diplomacy Project at Harvard’s Kennedy School of Government, and a former senior State Department official. As a declining power Russia is going to discover that it can’t realistically divorce itself from Europe, he said, just as China as a growing power understands that it’s most important relationship is with the United States. “Though balancing that relationship with Beijing will be the most important strategic challenge we face,” said Burns.

The current crises in Ukraine and the South China Sea that have driven Moscow and Beijing into each other’s arms also underscore the fundamental weakness in the Russia-Chinese alliance:  both have led neighbors in Europe and Asia to seek strategic partnerships with the United States and to strengthen their military capabilities.

Despite those natural advantages the very fact that a revanchist Russia and a rising China have found common cause in opposing the status quo power of the United States is a worrisome development, especially at a time of war-weariness and retrenchment in Washington. Even Richard Nixon’s post-Vietnam outreach to China didn’t deter a Middle East crisis in 1973 that very nearly had the United States and the Soviet Union fighting on different sides of the Arab-Israeli war.

New Alliance May Not Last

“The Obama administration is probably right that a geopolitical alliance between Russia and China will not prove lasting, but we should be worried that Moscow and Beijing are both reacting to what they perceive as a combination of American provocation and weakness, which is dangerous,” said Dmitri Simes, president of the Center for the National Interest. Before World War II, he noted, Western politicians and commentators rightly predicted that an alliance between a communist Soviet Union and a fascist Nazi Germany was unlikely and unsustainable. “And they were right, the Hitler-Stalin alliance only lasted a couple of years,” he said. “But in that short time Germany conquered Poland and occupied France, and created an entirely different geopolitical reality. Likewise, even a short-term Sino-Russian alliance, if mishandled by the United States, could cause us huge problems.”