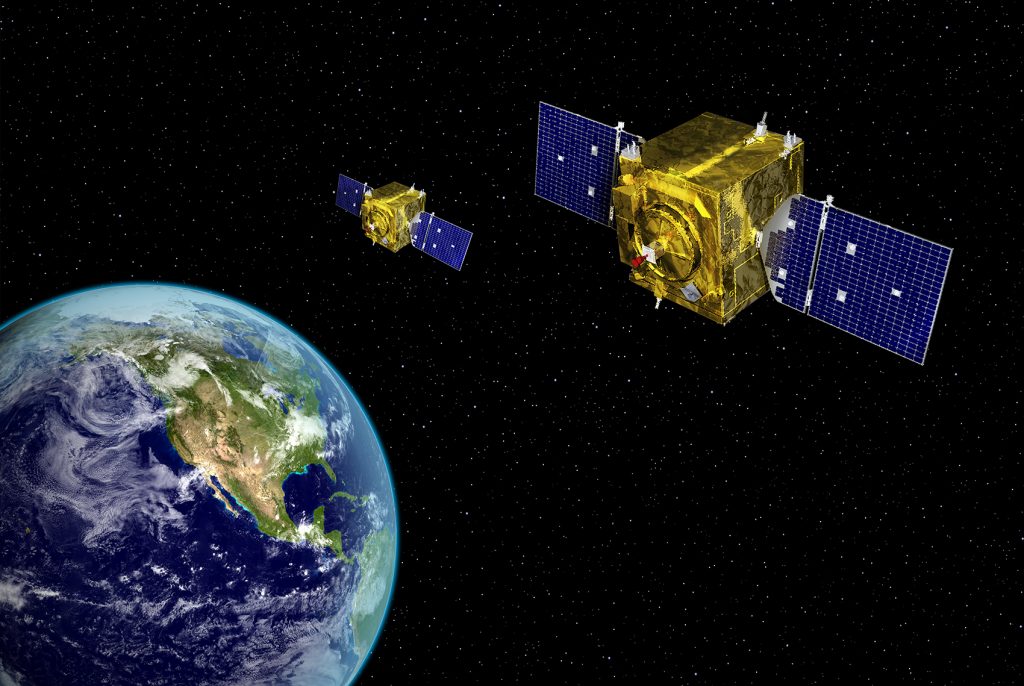 Weeden said the RPO activities of Russia’s Luch/Olymp satellite (which US Intelligence Community officials have labeled “suspicious”) and those of the US Geosynchronous Space Situational Awareness Program (GSSAP) “neighborhood watch” satellites over the past five years were “very similar.” While China hasn’t conducted any RPO missions close to other’s satellites, it has demonstrated that capability in GEO with its SC-17 satellite, he said at a breakfast meeting here today.

While satellites capable of close proximity operations are being developed by a number of nations for satellite servicing missions such as inspections, space-based space situational awareness, re-fueling and repairs, they also are capable of being used for intelligence gathering and as counterspace weapons. Such on-orbit anti-satellite (ASAT) weapons would not necessarily be kinetic. Instead, they could carry jammers or other directed-energy payloads to harm target satellites. Very close approaches between satellites could result in accidental collisions, creating dangerous space debris.

Between 2016 and mid-2018, GSSAP performed close RPO maneuvers around eight foreign satellites, according to data provided to SWF for their April 4-released “Global Counterspace Report” by Vladimir Agapov. The data was derived from tracking data collected by the ISON Space Surveillance Network. (ISON is a network of astronomers led by the Keldysh Institute of Russia’s Academy of Sciences.) GSSAP birds (of which there are four on orbit)  moved to within 10 kilometers of five Russian GEO-based satellites including two Raduga military communications satellites and the Luch/Olymp, according to the data. GSSAP sats also parked within 15 kilometers of satellites from China, a Nigeria and Pakistan.

A 10-kilometer separation between satellites in GEO is considered closer than normal but not a an imminent collision risk. The SWF report quotes Russian sources as saying that some of GSSAP’s maneuvers took place when the satellites were in the Earth’s shadow, making it “very difficult to estimate the current and future position of the GSSAP satellite and the other object, creating difficulty in determining safe approaches and ascertaining the intent of the approach, which could lead to misperceptions and mistakes.”

Jonathan McDowell, an astrophysicist at Harvard-Smithsonian Center for Astrophysics, said historically the ISON network data has been “pretty good,” and his view was echoed by several other space observation experts. Moriba Jah, director of the Advanced Sciences and Technology Research in Astronautics (ASTRIA) program at the University of Texas at Austin, however, cautioned that with all data a “caveat emptor” approach was necessary. There “may be some evidence” ISON data is “not always accurate, he explained, but “I wouldn’t call it suspicious.”

SWF’s report shows that Luch/Olymp parked near the American Intelsat 7 and Intelsat 401, and French-Italian Athena-Fidus satellites between 2014 and early 2019. French Defense Minister Florence Parley in September 2018, without directly referring to Luch/Olymp, complained that a Russian satellite with “big ears” had come “so close that one really could believe that it was trying to capture our communications.”

Todd Harrison, director of the Aerospace Project at the Center for Strategic and International Studies (CSIS), showed the breakfast attendees an interactive map of Luch/Olymp’s “unusual” movements in GEO — movements that US officials have called “suspicious.” CSIS’s Space Threat Assessment  2019 says that when Luch/Olymp parked in between two Intelsat communications satellites in 2015, “U.S. Space Command sent warnings to Russia after it predicted that Olymp-K would soon pass within 5 km of another satellite,” but  “Russia appeared unresponsive and later dismissive.” Indeed, at the time, the CEO of Intelsat called the maneuvers “irresponsible.”

Mark Berkowitz, vice president for strategic planning at Lockheed Martin Space Company, told the SWF audience that international rules of the road for space operations — similar to the norms and rules nations follow with regard to ship movements on the high seas — are necessary to “create a more orderly operational domain” and to reduce risks of misperception. Doug Loverro, former deputy assistant secretary of defense for space policy, agreed. But Weeden worried that these kinds of interactions between military satellites — which could be considered provocative or be misinterpreted — are increasing, while development of norms about what is acceptable are nowhere in sight. Militaries have no way “to signal: Hi, I’m just passing through,” he said. “I don’t see a lot of push from space powers to do this,” he lamented.

Indeed, the 92 member states of the  Committee on the Peaceful Uses of Outer Space (COPUOS) in Vienna could not agree during talk in 2018 on new voluntary guidelines for the “Long Term Sustainability of Outer Space Activities” on a proposal that would have simply pledged countries to consider development of new safety measures for close-proximity space operations. One US official blamed Russia for the failure, saying Vladimir Putin’s regime showed “no flexibility” on the issue. A COPUOS working group on the topic did agree to 21 guidelines for safe space operations, but Russia blocked the final document from being accepted by the United Nations.