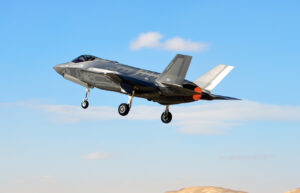 TEL AVIV: After years of selective strikes from Sudan to Syria and Iraq, Israel is clearly signaling it will launch “disproportionate attacks” against Hezbollah should the terrorist group strike against Israel with Iranian-supplied missiles.

This comes as Israel enters a second phase in its operations against Iranian targets to foil their efforts to upgrade dumb missiles supplied to the Hezbollah and to establish a missile upgrade capability in Lebanon.

Israeli intelligence has been following the shipments from Iran, watching Iranian operatives from the time they crossed to border and, at the right moment, attacked them. Cargo unloaded from Iranian cargo planes in Syria that landed in Damascus was destroyed only minutes after leaving the airport.

While most of these attacks have relied on fighters or drones striking from the air, it looks likely Israel attacks will now expand to other domains.

The problem Israel faces on its northern border is acute. While the Israeli Defense Forces are capable of suppressing most of the potential threat posed by the 140.000 Iranian-made missiles in the hands of the Hezbollah that would involve using all the Israeli fire power against all the villages in Lebanon in which the missiles have been deployed in hiding places, in the center of villages and highly dense population.

If Israel uses its full power in a “wild” way to stop missiles from hitting crucial sites, the world may react by imposing harsh sanctions.

The latest sign of the depth and breadth of the Israeli efforts against Iran came when details emerged about the real target of a drone troika in Lebanon, originally believed to have been an attack on Hezbollah’s media offices in Lebanon. But photos of the strike showed minimal damage to the offices, while several trucks parked outside were consumed in flames. The London Times revealed that the target was those burning trucks.

They were, according to the Times, loaded with machinery for mixing solid-fuel propellant for precision-guided missiles. The mixer had been brought to Lebanon in pieces and assembled nearby.

Since that drone strike — which Israel has not claimed responsibility for — Hassan Nasrallah, Hezbollah’s leader, has repeated his threat to use missiles to strike a huge ammonia tank in Haifa region which could poison thousands of people.