PARIS: “My integrity and belief in SCO’s mission is more important to me than my friendship over many years with Mike (Griffin).” That is why the head of the Pentagon’s vaunted Strategic Capabilities Office, Chris Shank, has resigned rather than see his office transferred to DARPA.

Griffin called Shank into his office on Friday and told him the office would be transferred and asked for Shank’s resignation. He agreed and immediately resigned. 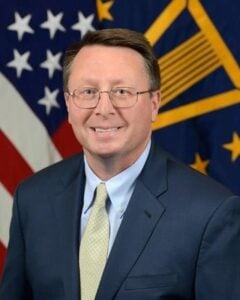 Griffin has pushed hard for the transfer of the SCO but Rep. Mac Thornberry, top HASC Republican, added language calling for more study of the move in the HASC National Defense Authorization Act markup last Wednesday. The Senate Armed Services Committee added similar language. They are not alone in opposing the transfer of SCO, which has been seen as the lead Pentagon office for taking advanced technologies and getting them into the hands of troops quickly, within two to five years. DARPA is not designed to do that. Instead, the famous office — responsible for creating the Internet — traditionally focuses on testing very advanced capabilities that may or not make into the hands of troops any time soon. Griffin, Defense undersecretary for research and engineering, leads all the Defense Department’s efforts in those fields and oversees both DARPA and the SCO. Griffin, the former head of NASA, pressed for and succeeded in creating the Space Development Agency, designed to bolster what is seen as a slow and cautious space acquisition bureaucracy. The Air Force opposed Griffin’s efforts and lost.

In this case, the Joint Staff, Special Operations Command, Indo-Pacific Command and European Command all opposed the proposal in memos to Griffin. “SCO and DARPA address distinctly different problem sets,” the 20 May Joint Staff memo says, adding that “it is not clear how DARPA will effectively execute both missions.” The SOCOM memo, by Vice Commander Lt. Gen. James Slife, argues that DARPA works on “DARPA hard” efforts that are not tied to user requirements and works on an “ill-defined timeline” while the SCO is “narrowly focused” on fielding capabilities in two to five years.

I asked Will Roper, the first head of the SCO who now serves as the head of Air Force acquisition, if he thought this was a sound approach. Uncharacteristically, he slipped around the question: “Colin, it’s very important for me to understand that I do this job and not that one. I have to now leave that mission to others.”

The effort to change the SCO has persisted since last year’s NDAA. In last years’ HASC emerging threats and capabilities mark they proposed “elimination or transfer of the functions of the Strategic Capabilities Office to another organization or element” of the Defense Department.

While Shank has done the honorable thing and fallen on his sword, we’ll have to wait and see whether that action changes anyone’s minds on Capitol Hill. It’s unlikely to change Griffin’s mind.