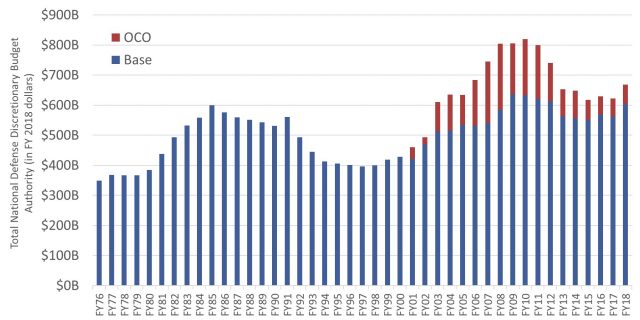 President Trump’s just-released 2018 budget proposal meets the goals set by Secretary Jim Mattis when he came into office, the Pentagon insists, even though the budget does not deliver the impressive defense growth the president promised.

Instead, it will, the administration says, be enough to patch up a “depleted” military that needs to be brought back to health after years of funding cuts. How much does the administration want to push things forward? One indication is that they are asking Congress for permission to start the work on a round of base closures (BRAC). Now that the GOP controls the White House and both house of Congress this will be a signature test.

Trump’s $574.5 billion request for the Defense Department hints at a future military buildup, albeit one that will have to wait at least another year. (We don’t really know because the budget does not include the usual out years, perhaps reflecting the fact only two senior Defense Department officials nominated by Trump have been approved by the Senate.)

Reaction to the budget from defense Republicans was swift and not positive.

“While I support President Trump’s commitment and intent to rebuild the military, this budget request will not be enough to do what he has said is needed to improve military capabilities and readiness,” Rep. Mike Turner said in a statement. “After years of underfunding and failed assumptions by the Obama Administration, these increases aren’t enough to begin the process to reverse the damage that has been done to our military.” Turner said he supported the $640 billion figure supported by Sen. John McCain and Rep. Mac Thornberry, chairs of the Senate and House Armed Services committees.

Turner was soon joined by Rob Wittman, chairman of the HASC seapower and projection forces subcommittee, who also said the Trump request was too low.

“The proposed $603 billion budget for the Department of Defense falls short of what is required to re-build our military, to modernize our worn-out equipment, and to support the force we need to deter conflict. I believe that $640 billion is the proper level of funding needed to ensure our military can respond to threats and keep our nation safe,” Wittman said in a statement. “A funding level short of $640 billion means that priorities such as raising the Marine Corps’ end strength to a force of 185,000, increasing our fleet to include 12 aircraft carriers, and continuing support to critical Air Force programs will be at risk.”

It is important to note that, while authorizers may be unhappy with the size of the Trump request, the early indicators from the people who actually set the amount of money that the Pentagon gets were that they would stick with Trump.

House Appropriations defense subcommittee chair Kay Granger told a Bloomberg Government event May 18 that the authorizers’ $640 billion wouldn’t happen “unless something drops from heaven.” Granger, who represents the Fort Worth area where the Lockheed Martin F-35 is built, is new in her job and has shown few signs of pushing the limits of the Budget Control Act.

One of the sharpest strategic marks in the budget request was the increase of the European Reassurance Initiative from $3.4 billion to $4.8 billion. Aimed straight at Russia, this should ease the fears of those who feared the Trump’s administration’s Russian entanglements might influence defense spending.

The most notable shift in this budget is to research and development funding for new technology. It seeks $82.7 billion, a significant bump of about 18 percent from 2017. The Pentagon’s budget documents are emphatic that investments will be a central focus in fiscal year 2019 and beyond. The details of the big buildup that Trump has promised will be informed by an upcoming strategic defense review later this year.

The fiscal 2018 budget “seeks to achieve program balance before beginning to grow capacity in future years,” the budget documents state. The new national defense strategy — slated to be completed this fall — will “inform the nature and size of the future force and therefore the investments needed to achieve that force,” the Pentagon says.

Following months of heated rhetoric from the Trump administration about Obama’s unacceptable levels of defense funding, the themes in 2018 are considerably more modest: restore readiness, plug holes and fix the damage from the Obama-era budget cuts.

The budget seeks $52 billion more than the military would have received under the Budget Control Act. The president is also seeking $64.6 billion for Overseas Contingency Operations, the part of the budget exempt from the BCA limits. Congress will almost certainly boost the OCO account as it’s the only way to increase defense without a breakthrough in the current political stalemate.

The request closely tracks with the Obama’s plan, much more so than the Trump administration would like to admit. However, this budget faces great challenges once it hits Capitol Hill. In part this is because the increase is being “paid for” by cuts to non-defense agencies. No deal to undo the BCA is in sight, so the road ahead for this budget is rocky at best. On the other hand, defense Republicans says it’s much too small.

The Pentagon continues to be fiscally squeezed by rising personnel costs, operations and maintenance expenses, which leaves little room for big investments in new weapons. Part of that is Congress’ fault, because it mandated a 2.1 percent pay raise for military troops rather than the 1.6 percent raise sought by the Obama administration.

Procurement funding would grow modestly to $114.9 billion, compared to $110.7 last year. Including both the base request and OCO, the Pentagon would invest $208.6 billion in modernization (RDT&E and procurement) in 2018. The bulk of funding is for: