US, Allies Getting Larger Airborne Network With New JTRS Radios 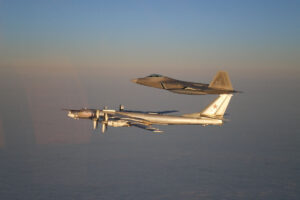 WASHINGTON: Over the last decade, the Joint Tactical Radio System (JTRS) program has experienced major restructuring and outright cancellations, but many elements are still going strong after a dozen years. Case in point is the airborne portion of JTRS, which has racked up $327 million in additional orders for use in Navy F/A-18E/F and Air Force F-22 aircraft, the DoD announced in two contract awards last night.

Data Link Solutions, a joint venture of BAE Systems and Collins Aerospace, was awarded $235.6 million to produce the most advanced version of the Multifunctional Information Distribution System (MIDS) JTRS radio, increasing its total contract value for MIDS JTRS radios to about $1.2 billion. ViaSat of Carlsbad, CA, was awarded a $90.8 million contract for the same radios, increasing its total contract value to $789 million.

The Naval Information Warfare System Command, formerly named SPAWAR, is the contracting authority. The Navy is the lead service on the JTRS program, which also includes the Air Force and Army.

The MIDS JTRS program of record is a four-channel radio that provides Link-16 and Tactical Air Navigation System (TACAN) capability, plus the ability to handle networking waveforms like the Soldier Radio Waveform and Wideband Networking Waveform, as well as future waveforms that meet the Joint Airborne Networking – Tactical Edge requirement. These waveforms are the heart of software-defined radios that can interoperate across handheld, vehicular, airborne, and maritime domains as nodes in a network for secure, wireless communications between U.S. forces and coalition partners.

TTNT will provide a larger throughput with lower latency, thereby enabling faster updates of precise information than Link 16. The Navy intends to use TTNT as one of the communications enablers for the Naval Integrated Fire Control – Counter Air capability, an electronic backbone that is being developed to tie together Navy and Army missile defense networks. The DoD says it needs 3,370 more MIDS JTRS radios with these capabilities.

The MIDS JTRS radios are replacing existing MIDS Low Volume Terminal (LVT) airborne radios, and have the same form factor. MIDS LVT radios are the product of a cooperative development program among the Navy, Air Force, Army, and France, Germany, Italy, and Spain. They provide voice, TACAN and Link 16 capabilities to the F/A-18, but can’t host  the new waveforms.