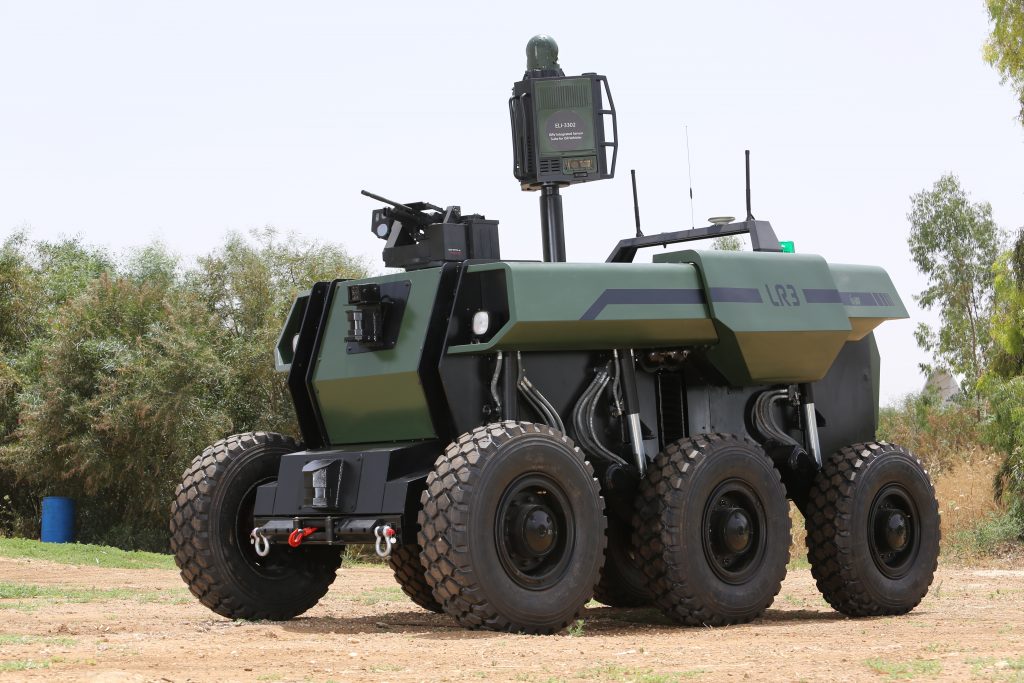 TEL AVIV: The US Army is looking into robots designed by Israel Aerospace Industries, with the first contracts likely to be signed in early 2019, after which production will shift to IAI’s US subsidiaries.

In recent months top officials of the US Tank-Automotive Research, Development & Engineering Center (TARDEC) have been visiting IAI facilities almost on a weekly basis, Breaking Defense has learned. 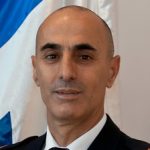 “We consider the US Army a big potential customer,” retired Maj. Gen. Gadi Shamni, IAI’s VP for land systems and the former Israeli defense attaché in the US, said in an exclusive interview. “They have been briefed in Israel and saw the systems in action in the US.”

TARDEC, soon to be part of the new Army Futures Command, is exploring a wide range of IAI robotic systems, Shamni said: counter-IED bots to handle roadside bombs; robotic mules to follow infantry soldiers with extra supplies; “leader-follower” systems where manned vehicles lead unmanned ones in convoy; engineering robots to bulldoze obstacles under fire; optionally manned vehicles that can switch to unmanned operation “in seconds”; and even armed robots. All these systems, he said, can either be remotely controlled by human operators or switch into a fully autonomous mode where they make decisions based on what their sensors see and what instructions the humans gave them before the mission.

But IAI is already looking into the next generation: “flocks” or swarms of robotic systems that communicate with each other using Internet Of Things (IOT) technology and collaborate to accomplish their mission. The US Army and other potential users want robots that can react in real time to immediate threats, Shamni said: “This requires operational decisions to be made in the front line and not in remote command centers, (using) robotic systems that are interconnected and can assist each other (in) fast changing conditions.”

Already, Shamni said, IAI is designing many of its ground robots to work with or even launch its combat-tested mini-drones and loitering munitions such as Harop (Harpy) and Green Dragon. With such robotic technologies likely to be be implemented on a “massive” scale, he said, “it opens operational opportunities that are now considered a wild dream.” 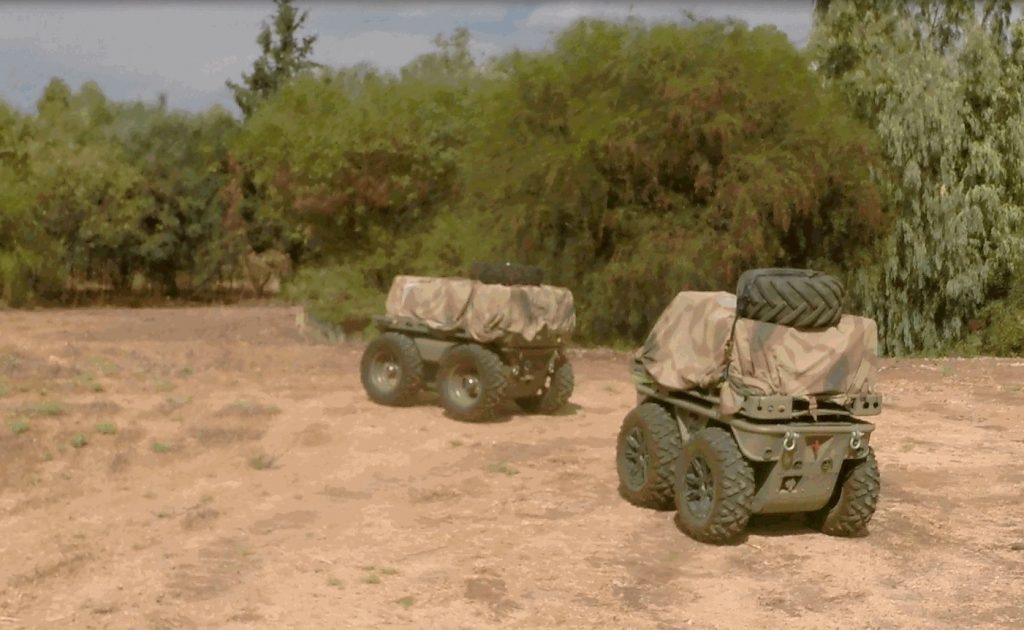 While some of IAI’s robotic systems are highly classified, they’re eager to talk about the others. For years, IAI has been a leading developer and manufacturer of drones, but more recently, Shamni explained, the company has applied its Unmanned Air Systems (UAS) technologies to a new family of unmanned ground vehicles. Driven initially by Israeli Defense Force demand, the IAI robots are now attracting international attention from the US, Australia, and others:

One of the largest is the seven-ton, six-wheel RoBattle – an unmanned, heavy-duty, highly maneuverable robotic vehicle designed to support foot troops in a wide range of missions, including armed reconnaissance, convoy protection, decoy operations, ambush, and attack.. Operators can equip RoBattle with different payloads including manipulator arms, sensors such as radars, and remotely controlled weapons. There’s even an option to replace the wheels with tracks. Overall, the 14,000 pound vehicle can carry up to 6,000 pounds of mission-specific equipment or cargo.

Robattle currently communicates with its human overseers using 4G LTE cellular technology, although the US might rather install a military-specific communication kit that’s more resistant to jamming. 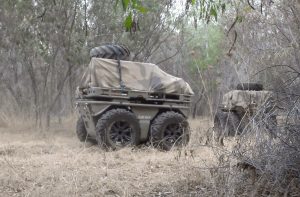 Another, smaller infantry support robot is the REX, currently under evaluation by both the Israeli and Australian armies. Shamni — a former paratrooper and IDF chief of infantry himself — noted that the modern infantryman must carry body armor, ammunition, and a wide array of electronics, not to mention batteries, that while tactically useful push the human body to the limits of its ability to carry the weight.

That’s why the US Army has explored — but never fielded — a range of robots to help haul supplies like extra ammo, rations, and batteries. The lineage runs from the ill-fated MULE (Multifunction Utility/Logistics & Equipment), part of the cancelled Future Combat Systems, to the current SMET (Squad Multipurpose Equipment Transport) trials.

In this niche, IAI is offering REX, a small unmanned platform with a hybrid engine that allows it to follow foot soldiers for 12 hours nonstop, carrying 880 pounds of equipment and supplies. It can also be configured to carry a stretcher with a single casualty — instead of taking at least two healthy troopers out of action to evacuate a wounded comrade — or even carry a remotely controlled automatic weapon.

A single soldier can use a remote control device to control the robot’s every action, set a series of waypoints for it to follow without further human intervention, or simply have the Rex follow him around at a pre-set distance using a virtual electronic “leash.” The goal is to minimize the amount of time and energy the infantry spend managing the machine, Shamni said, so “the leader becomes a mission operator rather than a robot operator.” 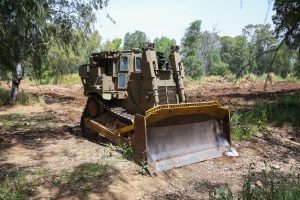 IAI’s unmanned variant of the D9 bulldozer for clearing mines and obstacles under fire, the PANDA.

While Rex and RoBattle are still being evaluated by the IDF, another IAI robot is already in use, Shamni said: the PANDA, a D9 heavy bulldozer modified to operate unmanned so it can clear roadside bombs and other obstacles while the humans stay out of the danger zone. This is another unmanned mission where the US Army has showed intense interest, not just for counter-IED work in counterinsurgency, but for major war, where conventional militaries like Russia’s practice building complex defensive belts of landmines and anti-tank obstacles, all covered by dug-in gun teams to kill any combat engineer who tries to breach them.

IAI has also developed an equivalent to TARDEC’s experimental “leader-follower” system, in which unmanned supply trucks follow a manned vehicle in convoy. IAI’s RoboCon is a “convoy leader” that can autonomously maneuver around obstacles and over difficult terrain. RoboCon is not a specific vehicle but a robotic kit that can be adapted to a variety of platforms. Shamni said that a likely future application would be a manned heavy tank, like the Israeli Merkava Mk 4, leading a convoy of robotic trucks.