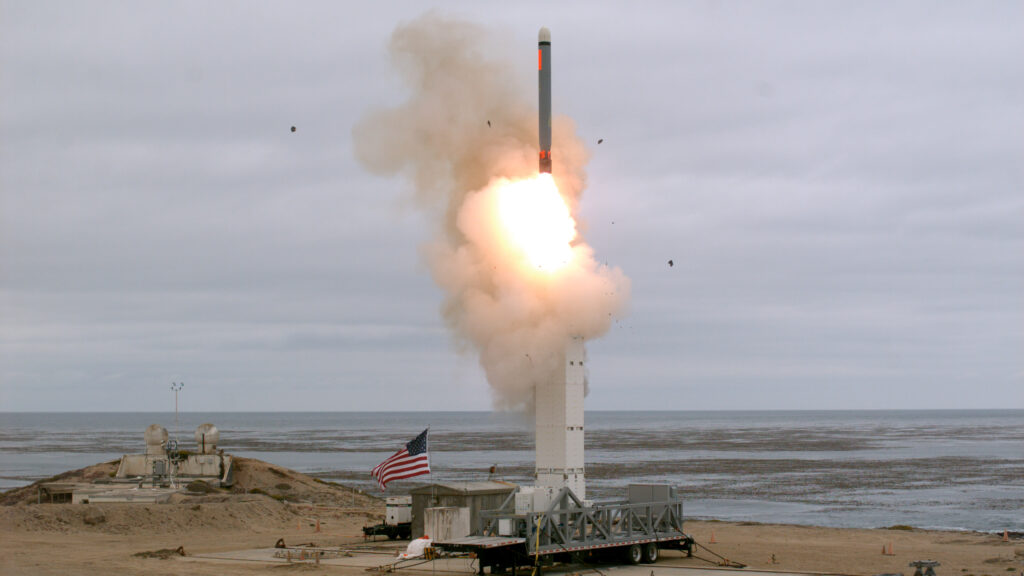 The US tested a cruise missile that would have exceeded the limits of the INF treaty.

WASHINGTON: The US took its first post-INF shot just 17 days after the America pulled out of the arms control treaty, launching a Tomahawk Land Attack Cruise Missile from a California island.

The missile flew more than 500 kilometers, according to a defense official, marking the first time since 1987 that the US has demonstrated the capability to launch a ground-based cruise missile between 500 and 5,000 kilometers — ranges previously banned by the Intermediate-Range Nuclear Forces treaty with Russia. With the treaty’s Aug. 2 demise, the cruise missile launch is now fair game. The missile launched from San Nicolas island in Southern California, flew 500 kilometers and struck back near where It launched.

The fact that the Navy/SCO test was able to hit a land target, as opposed to falling in the sea, shows at least some work had been done previously on the Tomahawk variant in order to get it in the air just 16 days after the US pulled out of the 32 year-old INF treaty.

While the Pentagon is showing what it can do, any future tests will depend on the National Defense Authorization Act’s conference negotiations this fall. In it’s 2020 budget request, the Pentagon asked for $96 million to continue research and begin testing ground-launched missiles that break the INF’s previously restrictive bounds.

But the Democratically-controlled House rejected the funding in its version of the bill, tying the money  to a fuller explanation from the Trump administration about whether existing sea and air-launched missiles would work, instead of building a new capability.

The test, a defense official said, was conducted as a joint project between the Navy and the Strategic Capabilities Office, and used a Mark 41 Vertical Launch System similar to the one found on the Aegis Ashore missile defense system the US has placed in Poland and Romania, in spite of loud Russian objections. The official said the launcher is a modified version of the one found on the Aegis Ashore platform, which is designed to intercept missiles launched by Iran.

Russia argues the Aegis sites are potentially offensive threats on its doorstep, claiming they could be retrofitted to launch missiles into Russian territory. Both American and NATO officials have long said the  sites are designed to detect and counter Iranian missiles and contain no offensive capabilities. Moscow has refused to accept NATO missile sites on former Warsaw Pact territory, calling it a “direct threat.”

Pentagon officials have long insisted that they were free to experiment with and evaluate missiles that would, if fielded, violate the INF treaty. But while the pact was in place, they would go no further than doing initial research.

That all changed on Sunday with the Tomahawk launch.

“The test missile exited its ground mobile launcher and accurately impacted its target after more than 500 kilometers of flight,” the DoD said in a release. “Data collected and lessons learned from this test will inform the Department of Defense’s development of future intermediate-range capabilities.”