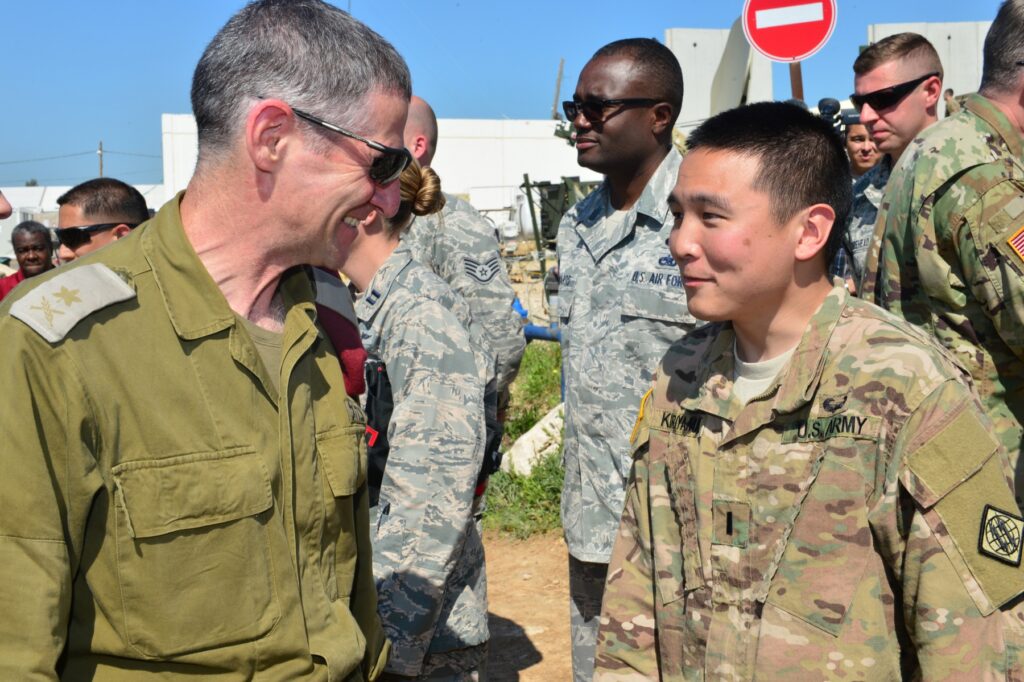 US and Israeli soldiers meet during previous Juniper Cobra wargames in 2016.

Israel has long been threatened by Hezbollah’s short-ranged missiles, but now Iran is stepping up the threat, both from its own long-range ballistic missiles and from its proxies in Syria. In response, Israel is pressing to build a multi-layered missile defense with its Arrow 2 and Arrow 3, Iron Dome and David’s Sling anti-missile systems.

And it will require American help, Israeli generals say. That is the reason for the huge two-week Juniper Cobra exercise underway, with 2,000 Israeli Aerial Defense troops with at least 2,500 US troops in the largest joint exercise with the US military.

“When necessary, US forces will deploy in Israel and fight alongside Israel’s Aerial Defense Division in order to protect Israel from missiles,” Brig. Gen. Tzvika Haimovich, commander of the IAF Aerial Defense Division, said. “This is the only division in the IDF whose operational goal includes cooperation with international forces, and the breadth of this exercise is unprecedented. This is an opportunity for the Aerial Defense Division to utilize all of its weapon systems and capabilities in one linear scenario and examine the division’s fitness.”

To help build the infrastructure, tactics, techniques and procedures that Israeli and US forces will need to counter that threat, heavy US Air Force transport aircraft landed in IAF bases two weeks ago and off-loaded full batteries of the most advanced ballistic missile detection and interception systems for the Juniper Cobra exercise. Hundreds of U.S personnel also arrived and began the deployment, escorted by IAF personnel.

“In the exercise, we simulate situations we expect to experience in real-time scenarios. No interceptors are launched during the exercise, which is performed solely using challenging simulations meant to emulate the expected scenarios,” described Brig. Gen. Gershon Zlotnik, deputy division commander. “The cooperation’s biggest challenge is the need for complete coordination between the two countries, from conversing in English to using multiple weapon systems at the same time. However, the mutual training forms interpersonal relationships which strengthen the will to protect Israel together”. 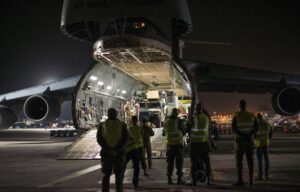 The first part of the training exercise involves deploying the American Patriot anti-missile system, while practicing security and logistical organization. During the second part, the forces simulate challenging scenarios, in which Patriots, THAAD and the AEGIS Combat System all coordinate with Israel’s David’s Sling, Iron Dome and Arrow. The scenarios are visualized in the weapon system’s command and control stations using a complex simulator provided by the US.

“In aerial defense, interception systems operate at different altitudes. As a result, we must synchronize them to achieve their full effect”, explained Lt. Col. Tal Kadori, Head of the Cooperation Branch. “During the training exercise, American soldiers and Israeli soldiers sit side by side and make decisions together. The extent of the exercise brings about a need to debrief the series of operational events on a daily basis so we can draw conclusions for the following day.”

The biggest test for the system may be its ability to handle more than one incoming threat.

Arieh Herzog, who headed the Israel Missile Defense Organization in the Israeli Ministry of Defense until 2012, told Breaking Defense that the combination of the two Arrow interceptors with the improved detection and classification of the incoming threat will allow the IAF to defend Israel at the best available level against single incoming missiles. “But,” he said, “when we talk about multiple launches, Israel will need help from the U.S. ” 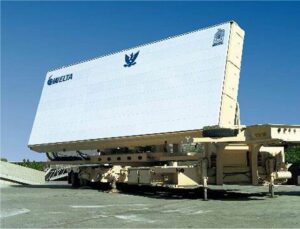 The Israeli’s Arrow batteries are connected to one command center which can decide which launcher would achieve the best results after an incoming missile is detected by Israel’s Green Pine phased-array radar and more advanced versions like the Super Green Pine (SGP). Detection is also performed by the Americans whose X-Band radar system operates in the south of Israel, and whose spy satellite data is shared with Israel.

The decision on what battery will launch can be made also using the communications network between the batteries with no need to go through the central command center. This sequence was tested successfully in last year’s intercept, when the Arrow intercepted a SA-5 surface-to-air missile launched towards an Israeli fighter jet,

The Arrow 2 and 3 are the upper layers of a system that is designed to defend Israel from rockets and missile. The Rafael Iron Dome system has intercepted hundreds of short- and medium-range rockets fired from the Gaza Strip.

One layer above is the Rafael-Raytheon David’s Sling designed to intercept longer-range rockets and cruise missiles. All these system are either fully operational or one step from it.

The Arrow-3 is the most advanced interceptor in the Israeli arsenal, Herzog says. The Arrow-2 has a proximity fuse that detonates the warhead, while the Arrow-3 is a highly complex hit-to-kill interceptor. A kill vehicle is ejected from the main missile and maneuvers itself until it achieves a kinetic kill with the incoming enemy missile.

The Arrow 3 will intercept outside the atmosphere. it is  much smaller and lighter then the “Arrow -2” and has superior maneuverability.

But missile defense is not the only part of this exercise. The USS Iwo Jima, a Wasp-class amphibious assault ship with 1,400 Marines, 1,100 Navy sailors, 25 aircraft and three hovercrafts, performed a drill with Israeli commandos on an Israeli beach March 7.

You can be sure agents from Iran, Russia and Syria are watching every moment.