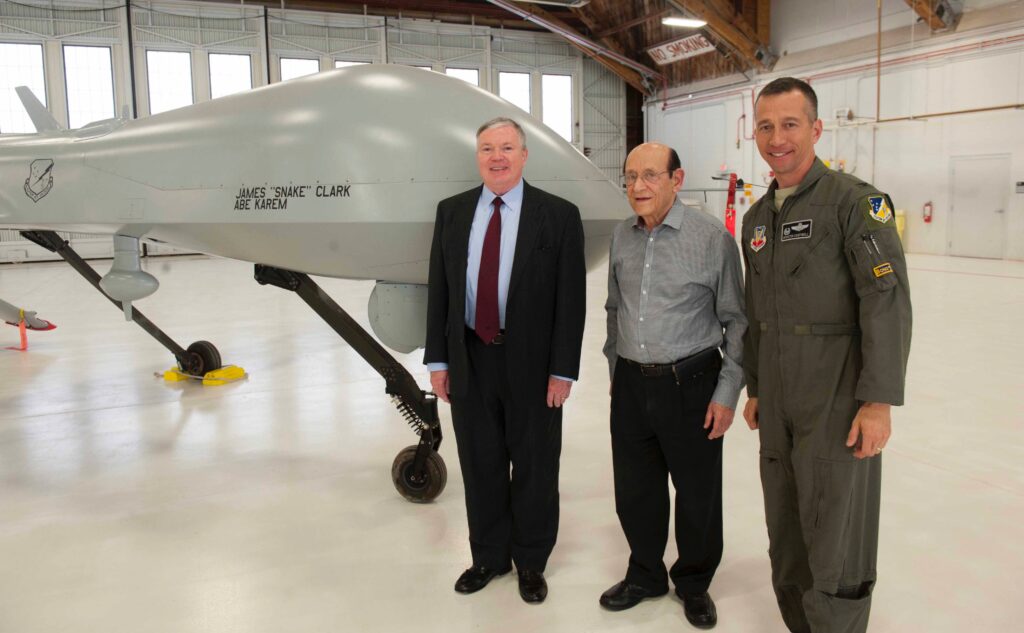 The iconic weapon of the post-911 era, the Predator, is being retired today. I asked Rick Whittle, who quite simply wrote the book on the subject, to tell our readers why Predator matters both as a weapon and as a concept. See what the man who fired the Predator’s first Hellfire missile — and took a huge career risk leaving the special operations community and volunteering to fly the new fangled drone — told Whittle about the plane’s importance. And Whittle of course spoke with Snake Clark, the Air Force’s unconventional fixer, who helped make it possible for pilots to fly Predator from the other side of the world and strike those who would do us harm. Read on! The Editor.

Creech Air Force Base’s 432nd Wing will celebrate the retirement today of the MQ-1B Predator, the drone that changed the world. That phrase is no overstatement. The Predator was the first weapon in history whose users could stalk and kill a single individual on the other side of the planet from a position of ambush and total invulnerability.

That revolutionary capability is why, for many, the Predator was not just revolutionary but very scary. It conjured up sinister visions of “killer robots,” of war becoming a video game to those fighting it, of leaders being tempted into war more readily because they could wage it without seeing body bags come home.

Those who still harbor those fears – all unproven, if not disproven — can take no comfort in the Predator’s retirement. Operators at Creech will still fly the MQ-9 Reaper, the Predator’s bigger little brother, a derivative that can carry four instead of two Hellfire missiles as well as two 500-lb. bombs. The Army will still fly its MQ-1C Gray Eagle, a diesel derivative of the Predator. Other nations will have armed drones, too, though the United States is apparently the only country that can fly remotely piloted aircraft via global remote control. Contrary to popular belief, that’s a lot more complicated than subscribing to satellite TV. 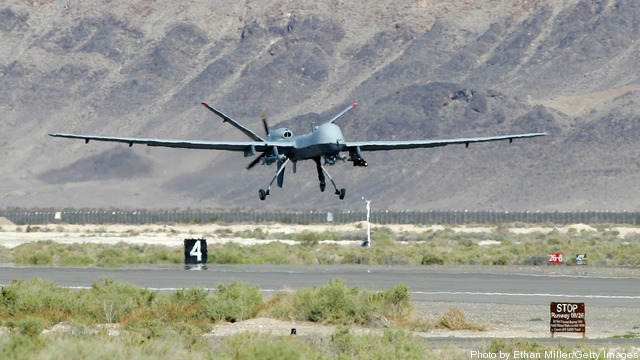 But in a larger sense the Predator was also world-changing because it could do a lot more for the military than serve as a global sniper and strike platform. What made the Predator really innovative was its ability to provide persistent Intelligence, Surveillance and Reconnaissance (ISR) with daylight and infrared cameras streaming live motion video back to its operators and to commanders nearly anywhere in the world. That had never been done before.

Over time, the Predator acquired more capabilities, such as carrying sensors to detect enemy forces or to jam their communications. Its operators discovered they could also guide manned strike aircraft to targets, provide overwatch for ground troops, even use the Predator’s two 105-lb. Hellfire missiles to provide close air support. Those capabilities, not just the ones that led the CIA to use it in targeted killings, were what made the Predator a major innovation. 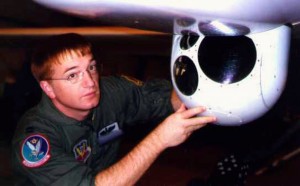 One of the first was Scott Swanson, who as an Air Force captain in 1998 voluntarily switched from flying special operations helicopters to flying Predators. On Oct. 7, 2001, as the war in Afghanistan began, Swanson was in a ground control station disguised as a construction bin on the CIA campus in Langley, Va., where he pulled the trigger on the first Hellfire strike ever launched from a Predator. That shot – ordered by the four-star commander of the war, Army Gen. Tommy Franks — killed some of Taliban leader Mullah Mohammed Omar’s bodyguards.

Swanson went on to fly many more Predator combat missions and fire other missiles, but he says what made the Predator important happened before the Air Force armed it.

“Predator represents innovation in mission,” Swanson said. “It was an assemblage of parts, all of which had been demonstrated in other systems, put together to give commanders something they had never had before — long-dwell, streaming TV of the battlefield below them. Sure, we’ve added weapons and other sensors since then, but the innovation was that mission. No longer did we have to wait for the recce jet to land and process film. No longer did we have an observation bird like an OV-10 with its crew and limited endurance. We had a bird with a day’s persistence overhead watching, watching and watching and live streaming that video back to the commanders who could act on that information.”

But Predator’s larger legacy is that it ignited a revolution that gave a good name within the Pentagon and the military to innovation, which today is all the rage in the military-industrial complex – as it has been for years in business circles.

The Defense Department, whose normal acquisition system moves like molasses just out of the freezer, has created the Defense Innovation Unit Experimental (DIUx), in essence a venture capital firm whose mission is to invest in commercial technologies the military can use. DIUx has offices in Silicon Valley, Austin and Boston and can award “pilot contracts” for technologies it likes within 30 days of getting a proposal.

Big prime contractors are learning the dance of innovation, too. The web site of Airbus’s self-described “Silicon Valley outpost” A3 (pronounced A-cubed) calls it “a place to innovate, to discover, to create, to explore.” The web site adds cheekily that, “only when we disrupt Airbus, its competitors, and the entire industry will we consider our goals achieved.”

Attitudes toward innovation were different when Predator made its first flight in 1994. That was just a few months before Harvard business professor Clayton M. Christensen published The Innovator’s Dilemma, the book that popularized the term “disruptive innovation,” the idea that big companies could lose their markets to innovators peddling cheaper, innovative products. Within a decade, leaders of big enterprises of all kinds were preaching what fellow Harvard professor and Christensen critic Jill Lepore called “the gospel of innovation.”

But the Predator was innovation before innovation was cool, which is why at first it had a hard time breaking into the system. In a December 2001 speech at The Citadel, two months after the war in Afghanistan began and armed Predators made their debut, President George W. Bush told the cadets: “Before the war, the Predator had skeptics because it did not fit the old ways. Now it is clear: The military does not have enough unmanned vehicles.”

As Bush’s observation suggests, at times the Predator had to be forced down the throats of the military, many of whose members get uncomfortable when their standard operating procedures and budgets are disrupted. This is why the Predator wasn’t developed by the usual suspects in the military-industrial complex, and probably couldn’t have been. It was developed by unorthodox thinkers – by innovators.

The Predator’s fundamental configuration was developed in his Los Angeles garage by former Israel Aircraft Industries engineer Abraham Karem, whose company went bankrupt trying to sell his revolutionary drone ideas to the military.

Karem’s ideas were rescued in 1991, and he and his team were hired, by a pair of innovative brothers, Neal and Linden Blue. The Blue brothers owned a nuclear energy company called General Atomics but were sure drones were going to be the next big thing.

Two other innovators shoehorned the Predator into the military — John Deutch, the Clinton administration’s first undersecretary of defense for acquisition and technology, and his deputy, Larry Lynn. They created Advanced Concept Technology Demonstrations – now Joint Concept Technology Demonstrations – to field equipment faster. In 1994, the Predator was the very first ACTD, and went from contract award to first flight in six months.

When he became Air Force chief of staff, Ron Fogleman maneuvered within the Pentagon for two years to wrest control of the Predator from the Army, its original home.

Col. Bill Grimes, director of a secretive Air Force technology and rapid prototyping shop at Wright-Patterson Air Force Base called Big Safari, secretly and successfully maneuvered on Capitol Hill to get the Predator assigned to his outfit in 1998. Grimes was sure the regular Air Force would instinctively disdain and try to discard the little drone if it could.

As vice chairman of the House Intelligence Committee and a powerful appropriator, Rep. Jerry Lewis, the California Republican since retired, helped Grimes get his way. Later, as a powerful senior member of the House Appropriations Committee, Lewis used earmarks more than once to save the Predator from budgetary extinction.

In May of 2000, when he was commander of Air Combat Command, future chief of staff John Jumper decided to arm the Predator. To succeed, Jumper had to fight State Department lawyers who feared Russia would call an armed drone an arms control violation.

More than a handful of other innovators played important roles in turning the Predator into a revolutionary intelligence platform and then into an unprecedented weapon. One key player, and one of the most colorful, is James “Snake” Clark, guest speaker at today’s Predator retirement ceremony at Creech.

Clark, a former Air Force colonel whose civilian Air Force job title is director of ISR modernization and infrastructure, was an inside fixer for the chief of staff and the secretary of the Air Force during the Predator’s formative years. Fogleman and others used Clark to get things done when bureaucracy stood in their way, as was often the case with the Predator. Irreverent, sassy, unafraid to step on toes, Clark knew shortcuts through the bramble, and when challenged, he loved to play what he called Pentagon Poker: “I’ll see your three-star and raise you a four-star.”

“In the history of warfare, each generation has a weapon system that defines the conflict,” Clark said. “In the days after 9/11, it was the Predator…that defined the war on terrorism. Its unique 24-hour constant view of the battlefield revolutionized modern warfare.”

What remains to be seen is whether the Predator will turn out to be not simply an innovation but, in Harvard professor Christensen’s lexicon, a “disruptive innovation.” At the end of World War II, Gen. Henry “Hap” Arnold, commander of U.S. Army Air Forces, said, “We have just won a war with a lot of heroes flying around in planes. The next war may be fought by airplanes with no men in them at all.” So far, Arnold remains wrong, but the drone revolution is still unfolding, and many experts see fully autonomous flight just over the horizon – a disruptive innovation indeed.

Richard Whittle, a Breaking Defense contributor,  also wrote the book on the V-22.