V-22s Cleared For Okinawa And Heads To UK Air Shows 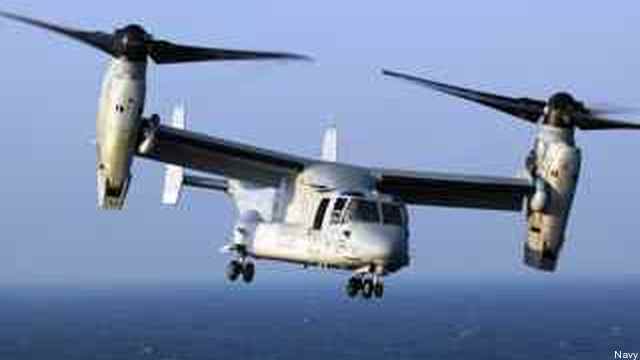 The Pentagon and the Japanese government announced early Friday that a dozen Marine Corps MV-22 Ospreys are being shipped to Japan for deployment on Okinawa but the planes won’t fly until investigations into two recent crashes of the tiltrotor troop transport are complete.

The Marines have long had plans to deploy two squadrons of Ospreys on the island of Okinawa to replace aged CH-46E Sea Knight and CH-53D Sea Stallion helicopters based at Marine Corps Air Station Futenma. Local residents and politicians have resisted the plan, citing noise and worries about the helicopter-airplane hybrid Osprey’s safety — a concern heightened in the wake of an MV-22 crash April 11 in Morocco that killed two Marines and a CV-22 crash in Florida June 13 that injured five Air Force Special Operations Command crew members.

The DoD announcement said Japanese officials agreed the Marines could go ahead with the Osprey deployment to Okinawa after being briefed on preliminary findings of investigations into those two crashes. As Breaking Defense has previously reported, aircraft malfunction has been ruled out in the Morocco crash, and the commander of AFSOC’s 1st Special Operations Wing at Hurlburt Field, Fla., has said there is no evidence of any mechanical problems or design flaws in the Osprey that crashed at Eglin Air Force Base. The Osprey, a revolutionary design, tilts two large wingtip rotors up to fly like a helicopter and forward to fly like an airplane.

As the debate in Japan shows, the Osprey’s reputation remains marred in some quarters by three crashes during its 25-year development that killed 30 people between 1992 and 2000, including 15 Marine infantry who were taking part in an operational test. Even with its two recent crashes, though, the Osprey has been one of the safest rotorcraft in the U.S. military inventory since 2001, a period in which the armed forces have lost 414 helicopters at a cost of 606 lives. During the same period, six people have been killed in three Osprey crashes.

The Marines and the makers of the Osprey, 50-50 partners Bell Helicopter Textron Inc. and Boeing Co., have high hopes of making a first foreign sale of the V-22 sometime soon, which is why the four MV-22s are being sent to the upcoming air shows in England. From July 7-8, they’ll will be used to take senior air commanders from around the world on demonstration flights during the world’s largest military air show, the Royal International Air Tattoo at Royal Air Force Base Fairford, two hours northwest of London. From July 9-15, the Ospreys will offer flights to military brass and foreign VIPs during the Farnborough International Airshow, which alternates biennially with the Paris Air Show as the world’s premier aviation trade fair.

An Osprey was on display last November at the Dubai Airshow, and the United Arab Emirates are thought to be the most likely first foreign buyer of Ospreys. UAE and U.S. military representatives have recently been meeting and exchanging paperwork on a possible Osprey purchase in a “very active dialog,” said a government official privy to the discussions. “Looks pretty serious. Until the contract’s written, though, the contract’s not written.”