Did North Korea really launch an Intercontinental Ballistic Missile (ICBM) on the Fourth of July, as many in the US government and the North Koreans say? A pair of missile defense experts examine the facts and draw their own conclusions. Read on! The Editor.

Among the fireworks of the Fourth of July came an unwelcome surprise: North Korea fired a missile with a high loft and claimed a successful test of a true Intercontinental Ballistic Missile (ICBM), apparently raising the global stakes in the increasingly tense standoff between the United States, China, South Korea and the north.

As plenty of people and organizations have already staked out positions based on the supposed ‘truth’ of DPRK assertions, we chose to analyze the Hwasong-14 for any similarities or differences from a purpose-designed ICBM with capabilities for ranging all of CONUS. With ICBMs, size matters. As can be noted in Figure 1, one vehicle does not resemble an ICBM. 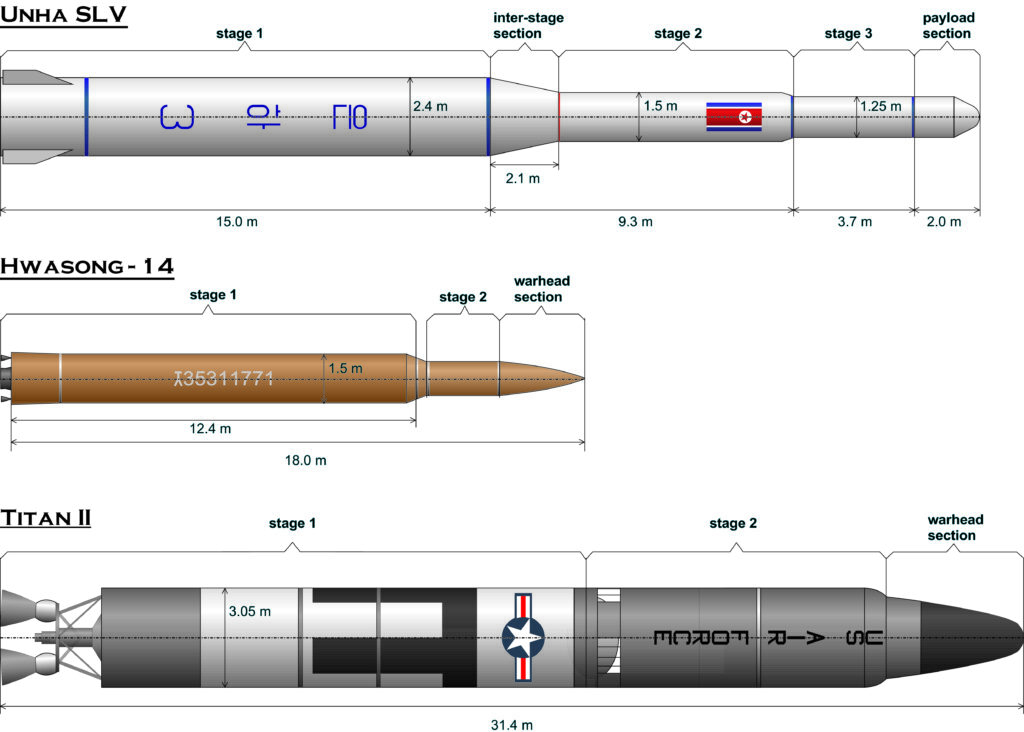 One of us (Savelsberg) published an early analysis that concluded that it’s not really an ICBM and clearly lacks any design margins to grow to the sort of performance that a real purpose-designed ICBM boasts. It’s too small and too close to zero payload at useful ranges. The HS-14 will not be threatening San Diego now or in two or 20 years. True, at low payloads, the HS-14 payload range capabilities exceed the arbitrary 5,500 km range value, but it’s not really a useful ICBM.

After a number of failures, North Korea successfully placed masses in orbit twice (in 2012 and 2016) using the Unha Space Launch Vehicle. We are meant to believe that the North Korean long-range missile and Space Launch Vehicle (SLV) efforts are separate. Originally the Unha SLV was thought to be a close relative of the Taepodong 2. It remains North Korea’s most powerful rocket and its quickest, most credible route towards a purpose-built ICBM. In this article, we assess the performance of five credible military variants using missile stages that have successfully flown, mated with the proven Unha stage 1, via computer simulations.

A militarized Unha is too large and fragile to be mobile; it will require covert silo basing. And, as a flat-pad launch system with extended preparation timelines that just makes it ‘JDAM bait’. We examine the engineering of the missile itself and leave details of the rest of a DPRK ICBM deterrent to others. (We’re not discussing the silo/ground support equipment, command and control components or the nuclear warheads since this is an open-source analysis.)

Unlike most SLVs, which optimize performance with a coast phase (the time when the engines shut down), North Korea’s Unha applies constant thrusting by unique application of an R-17 (Scud-B) derived engine for its second stage and twin R-27 modified ‘vernier’ engines for the third stage.

We used science and engineering principles (actual rocket science) to extrapolate from the known Unha SLV performance to different variants as ICBMs with different flight profiles and loft (altitude-time). To get it right; we had to be diligent and assure our model closely matched the actual flight performance as subsequent modeling credibility has to build on that foundation. Part of that credibility rests in providing reasonable design margins as competent designers do during early design cycles (that 10 percent fuel reserve).

Our understanding of the Unha was constrained by the estimated mass to orbit and the known (and suspected) thrust optimizations that were required to deliver that mass to orbit.  Panel lines and rivets visible in photographs of stage 3, see Figure 2, allowed an estimate of its propellant volume as well as mass delivered to orbit. We include unused propellant (~ 10 percent) for design margins typical for competent SLV designs. 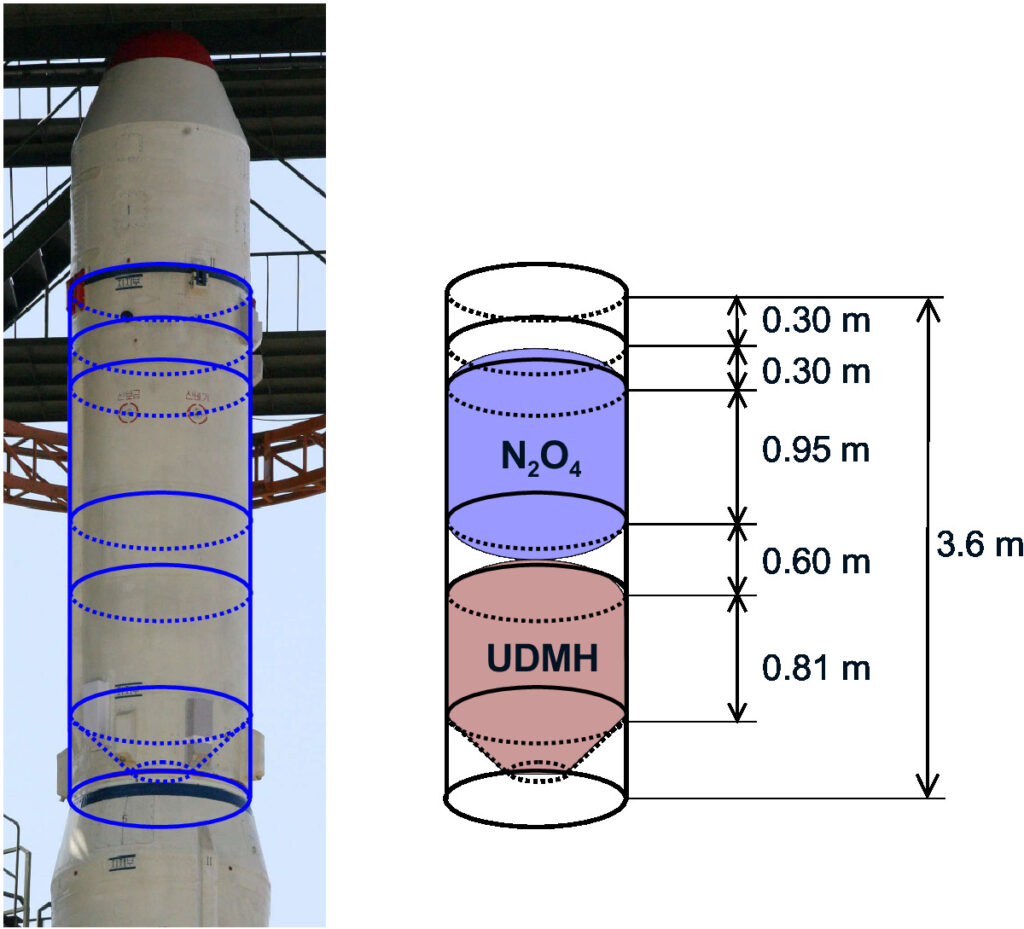 The ROK Navy, who recovered missile components from the sea, verified that the first stage uses a cluster of four Nodong-derived engines steered by four vernier engines. Elimination of the graphite thrust vectoring vanes increases delivered thrust by increasing the effective nozzle area. This known modification proved out the (suspected) derivative R-17 engine with vacuum nozzle extension and two verniers for steering modeled to power Unha stage two. We assume that a nozzle extension has been fitted to all upper stage engines to approach the vacuum specific impulse, as not matching vacuum backpressure simply wastes the energetics of the rocket propellants. The complete parameters of the SLV are listed in Table 1. 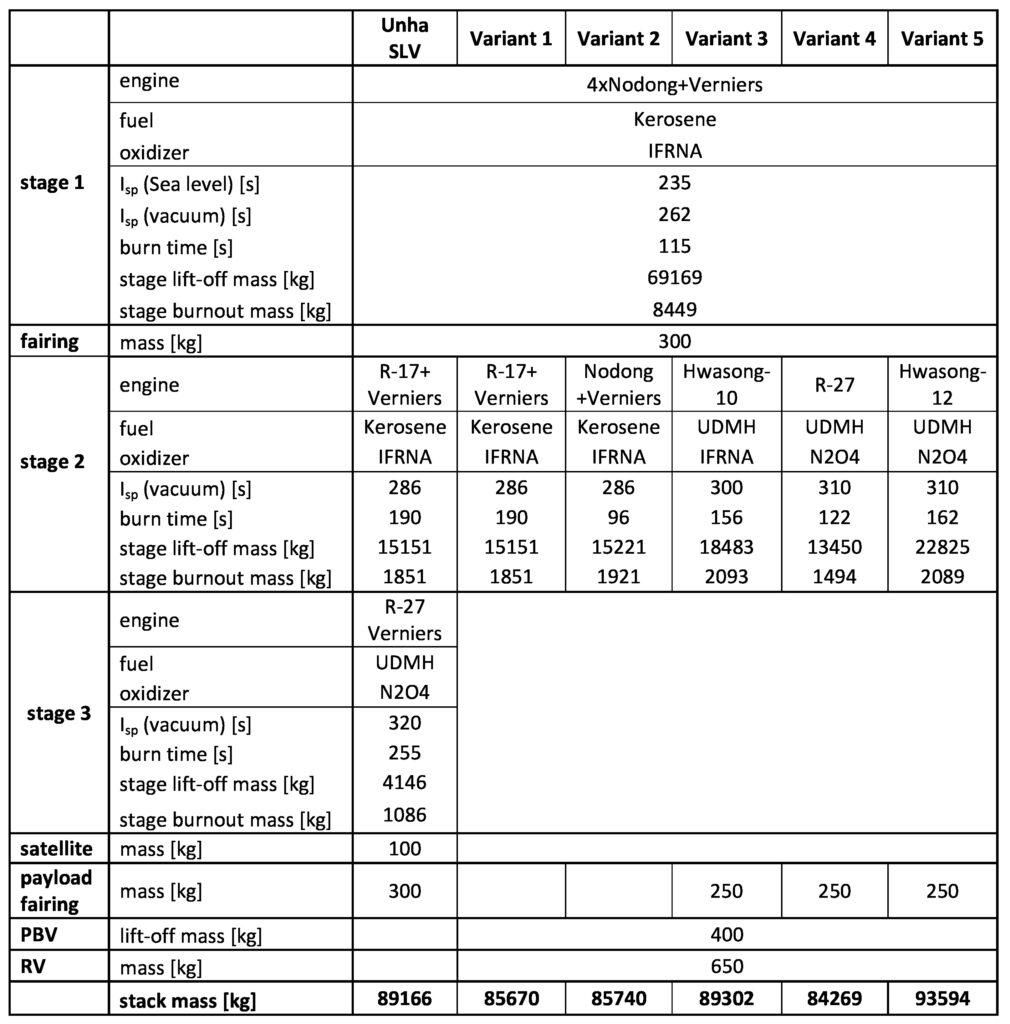 The simulated trajectory to orbit is shown in Figure 3.

The model we developed closely replicates the reported stage and fairing drop locations and mass on orbit within the bounds of reporting uncertainty. Substituting verniers for thrust vectoring vanes and adding the nozzle extension significantly increases the thrust for stage two. We obtain a heavier stage three, with a propellant reserve matching photographic evidence, than as reported in other recent parameter estimates of this missile.

How The Missiles Performed

We studied five different variants for ICBMs based on the Unha first stage. All variants share a 650 kg Soviet-like triconic reentry vehicle (RV) and a 400 kg post-boost vehicle (PBV) for finer targeting. Variants one and two affix the ‘bare’ RV and PBV directly to the front of the missile, as was done on early Soviet and American ICBMs. The three high-performance versions are fitted with a 250 kg ogive nose fairing creating additional options as sufficient throw weight is available. A fairing necessitates ejection hardware and maneuvers at some point, but the Unha SLV and Hwasong-14 demonstrated mastery of ascent fairings.

We modeled a 2-stage version of the existing Unha (Variant 1), a version using a Nodong-derived engine in the second stage (Variant 2), and high performance options applying a Hwasong-10/Musudan, native R-27 propulsion, or a Hwasong-12 as stage 2 (Variants 3, 4 and 5, respectively). For the latter three variants, the second stage masses were lowered by moving guidance equipment to the PBV. To assist visualization, scaled ‘cartooned’ images of two of the ICBM variant outlines, as compared to the Unha SLV, are shown in Figure 4. The specific stack to stack comparisons for the ICBM variants from the basic Unha SLV are presented in Table 1. 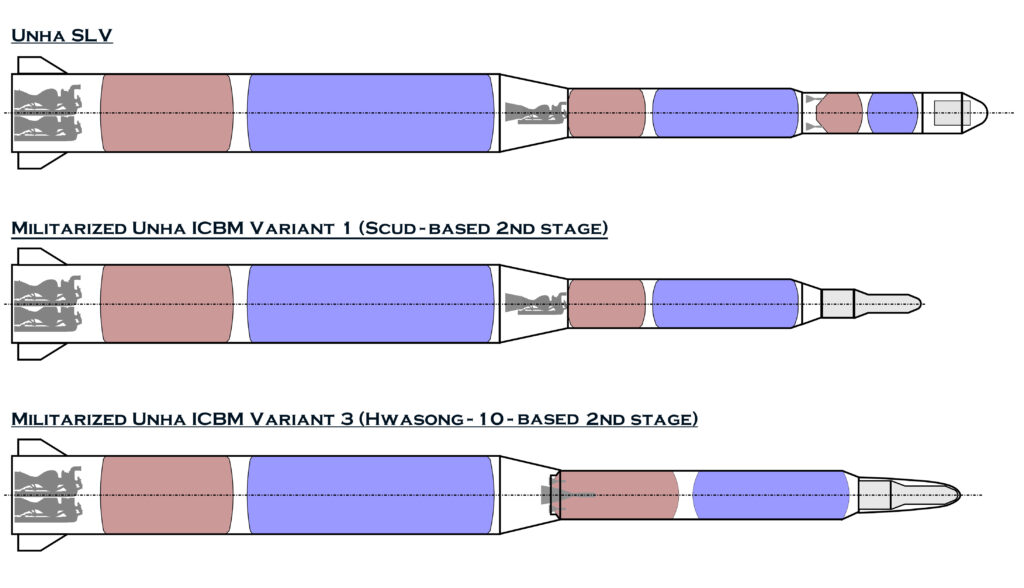 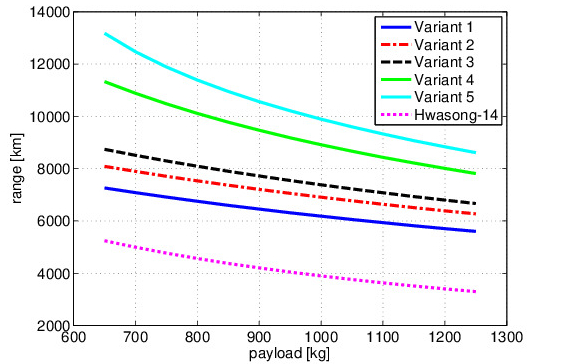 Simulation results in Figure 5 show that all of the Unha variants exceed the ICBM threshold range of more than 5,500 km. However, only the high performance variants boast enough throw weight at a long enough range to threaten the Continental US. (Pyongyang-Seattle is about 8,000 km). A stage based on the Hwasong-12 has greater than 13,000-km range capability with a 650 kg payload.  A Hwasong-10 stage 2 still provides 8,700 km range capability with the same payload. The simulations in Figure 5 were performed without Earth rotation. In order to reach targets in the US, a missile from the DPRK needs to be launched towards the north-east, which means that Earth rotation helps to boost range.

Figure 6 shows the maximum range of Variant 3, with a payload of 650 kg, and Variant 5 with 800 kg and 1,100 kg payloads, with Earth rotation included. With a payload of 800 kg, Variant 5 has sufficient range to reach Miami without applying PBV fuel to extend range. 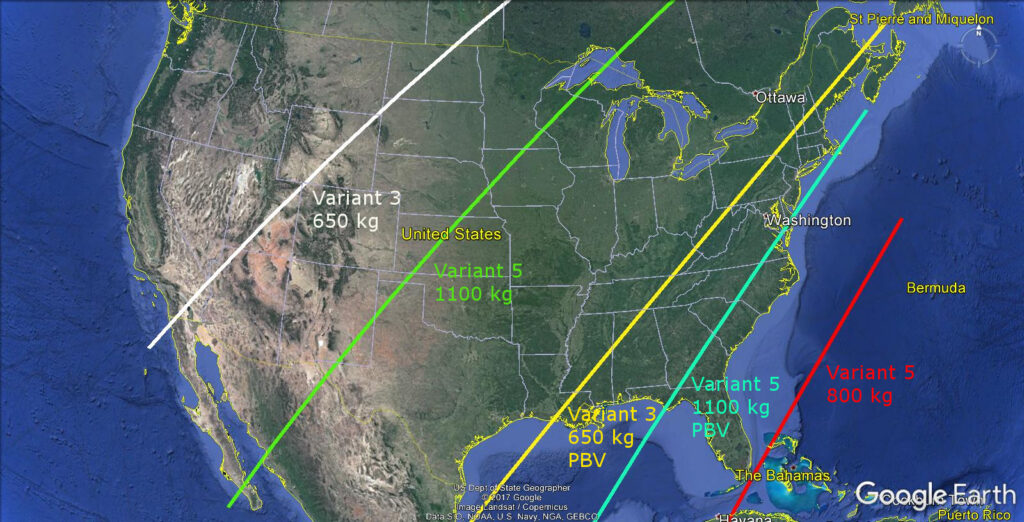 Figure 6: Visualization of the maximum range of different Variants against the Continental United States in Google Earth.

The figure also shows the range increase associated with using some of the PBV propellant for range extension (~ 150 kg/400 kg). This would allow Variant 5 to reach much of the Eastern Seaboard with an 1,100 kg payload. We were conservative by not applying the upper range of vacuum Isp that could be obtained by using upper stage fully vacuum optimized nozzles on Variants 3, 4 and 5. As we previously modeled the Musudan, our Variant 3 used IFRNA to examine that parameter space. Variants 4 and 5 use N2O4 as the oxidizer in the second stage, requiring thermal controls in a missile silo.

North Korea has tested ablative reentry heatshield technology by blasting test objects with rocket exhaust; this limits the size of the test object and requires assumptions of manufacturing uniformity. To date, the DPRK heatshield tests have shown workable ablation for a relatively blunt design; however, these tests do not guarantee that the DPRK can indigenously manufacture a complete reentry aeroshell free of defects. The lofted Hwasong-12 test of May 2017 had limited application to ICBM range vehicle reentry (loading and velocity). For contrast, the US ‘Advanced Ballistic Reentry Systems’ (ABRES) program flew a large number of designs and collected data addressing reentry survival, accuracy and signature management over decades. The North Korean’s blunt RV design shown will have poor accuracy from winds on reentry. Without flight test activities similar to ABRES and corresponding Soviet efforts, the DPRK won’t be able to trust low mass / high performance reentry heat shielding for their desired nuclear deterrent.

North Korea probably can’t build a system accurate enough to target cities, given what we know about their access to Scud-class guidance. The roughly 1 km CEP achieved at 300 km by the R-17 scales to 30 km+ CEP at 9,000 km. Current news reports highlight the attraction of mobility. A mobile missile can be concealed while it’s prepared for launch and then driven to a surveyed position for attack so it seems to be a very challenging threat. But rapid erection of mobile missiles provides significant challenges for accuracy. Over ICBM ranges, azimuthal errors are substantially worse than the effects of poorly integrated missile accelerations. North Korea would need improved guidance technologies and demonstrate that they can be integrated with an ICBM range missile.

Engineering evidence shows that the DPRK is capable of building a silo-based ICBM based entirely on tested boost stages. This missile has appropriate design features that optimize the military capabilities while observing the constraints of fuels and structures characteristic of high performance missiles. Boost times of ~240 seconds for an R-27 derived short burn stage 2 or just below 280 seconds for a Hwasong-12 based stage 2 (plus post-boost trim) are very competitive compared to solid-fueled ICBMs, under 200 seconds, and traditional longer burning liquid-fueled missiles such as  the Titan II at ~300 seconds. This is the ICBM we should be looking for. The US is not yet at high risk, however, as the DPRK has not demonstrated competency with either ICBM range reentry or relevant guidance technology.

Ralph Savelsberg is an associate professor at the Netherlands Defense Academy in Den Helder, specializing in missile defense. James Kiessling is a missile defense expert who works for the Defense Department in Washington D.C. This article does not reflect any official position or policy of the US Government.