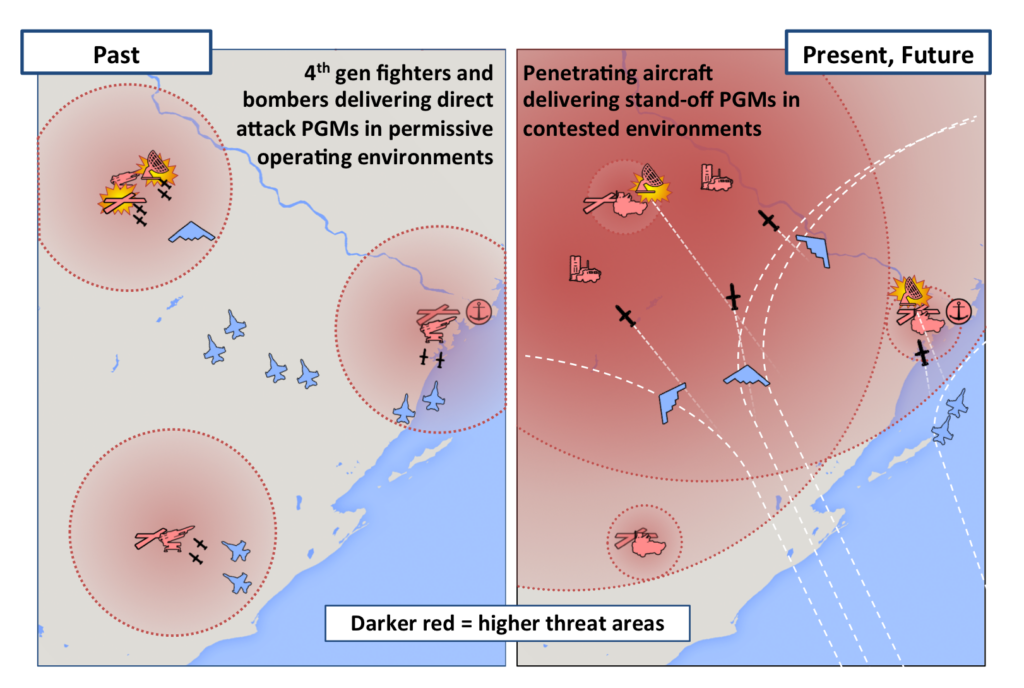 Washington’s gotten used to war on easy mode. Policymakers may debate the strategic value of air campaigns in places like Syria, Iraq, and Yemen, but they assume the smart bombs will hit their targets. One bomb, one target, one boom.

That assumption is no longer safe, says a new study from the influential Center for Strategic and Budgetary Assessments. (CSBA gave us a copy in advance). Countermeasures are growing more sophisticated and more common. Advanced anti-aircraft missiles can snipe a single smart bomb out of the sky, let alone the US aircraft carrying it. Jammers can scramble radar and GPS. Lasers and high-powered microwaves are becoming practical weapons against incoming missiles. So the smart bomb won’t always get through.

Worse, as the odds of any single weapon hitting go down, the number of weapons required to assure a hit goes up exponentially, say CSBA authors Mark Gunzinger and Bryan Clark. If the enemy can’t stop your weapons, you need to send just one to have 95 percent confidence of hitting any given target. But if the enemy can stop a significant fraction of your smart bombs, say 20 percent, you need to send two to achieve that same 95 percent confidence. If your weapons have only a 50-50 chance, you need to send five. Against a major adversary, like Iran or (in the nightmare scenario) China, we might run out of weapons well before we run out of targets. 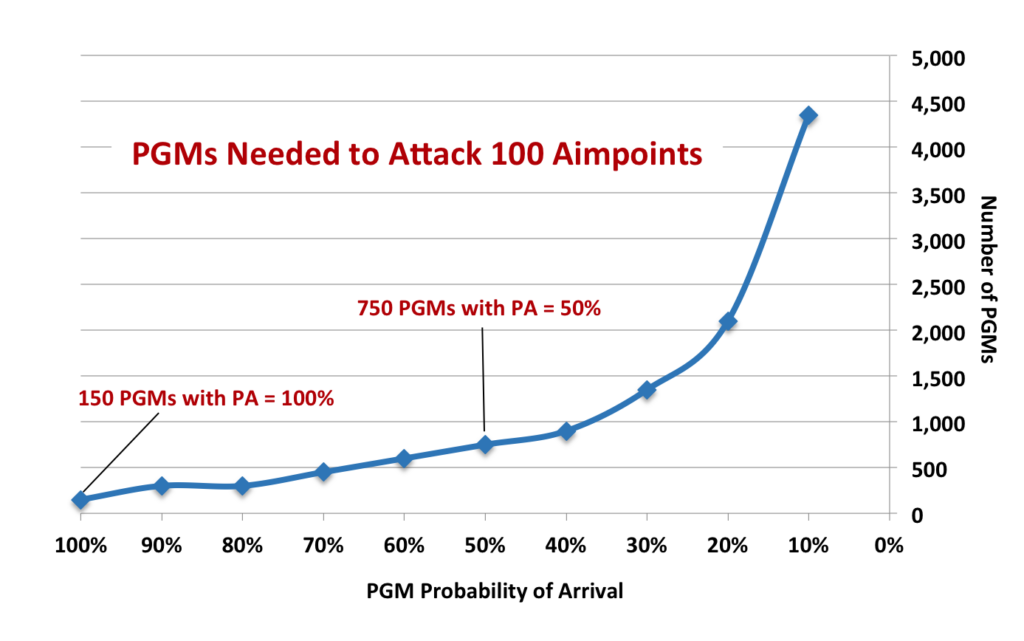 As enemy countermeasures improve, the number of weapons required to assure a hit increases exponentially.

Worse still, we might lose an awful lot of aircraft on the way. A staggering 96 percent of the precision weapons the Pentagon has bought since 9/11 have been “direct attack” munitions. These weapons are relatively short-ranged. For example, the new Small Diameter Bomb (SDB) II has wings to glide up to 40 nautical miles from the aircraft that launches it. The older and larger Joint Direct Attack Munition (JDAM) can glide just 13 nm.

Against a low-tech adversary like the Islamic State, a US aircraft 13 miles away might as well be on the moon. Against an adversary with modern anti-aircraft weapons, however, a US aircraft that comes within 13 or even 40 miles is begging to be shot down.

In brief, we’ve not bought enough smart weapons for a major war — and the ones we have bought are mostly the wrong kind.

Conversely, we have far too few long-range weapons such as cruise missiles, which can be fired from outside enemy air defenses’ range, and the ones we do have are far too expensive to buy in bulk. The average direct-attack bomb bought since 2001 costs $55,500; the average long-range precision-guided weapon costs $1.1 million, twenty times as much.

Replaying the 2003 invasion of Iraq with long-range weapons in place of all the direct-attack ones, Gunzinger and Clark write, “would cost $22 billion for the PGMs alone.” Even if we wrote a blank check in a crisis, they say, the industrial base probably couldn’t ramp up fast enough. Whatever we do about the smart bomb problem, we need to start working on it now.

And there are definitely things we can do, say Gunzinger and Clark, who discussed an advance copy of their report with me. There are new tactics like “tunneling” — depleting the enemy defenses with decoys, jammers, and cheap bombs before we fire the good stuff — that we can use right now. In the near term, there are modest modifications we can make to our existing direct-attack weapons, like adding wings and even small turbojets that boost their range dramatically. New explosive materials can make lighter weapons hit harder.

In the longer term, we can build new types of intermediate-range weapons in what Gunzinger and Clark call the “sweet spot” between cheap direct-attack munitions and expensive long-range ones. The vast majority of existing US weapons have ranges either less than 50 nautical miles or more than 400, they write, but weapons in the 50-400 band should be far more affordable than cruise missiles yet far more capable of penetrating advanced air defenses than unpowered gliding bombs. (The 200-nm-range JASSM, or Joint Air-To-Surface Standoff Missile, is one of the few weapons in this “sweet spot” currently).

New weapons could incorporate some degree of stealth and jamming, to make it harder for enemy defenses to detect and target them. Some might be hypersonic, achieving speeds above Mach 5 to dash through enemy defenses before they can react.

One day, really smart smart bombs could even incorporate some measure of artificial intelligence. If all the autonomous munitions headed for one target were shot down, while another target was struck on the first try, the surplus smart weapons from the target already destroyed could divert themselves in flight to where they were still needed. Such “collaborative” weapons should be markedly more efficient, Gunzinger and Clark calculate, dramatically reducing the number required.

“Collaborative” weapons with artificial intelligence to coordinate their own attacks can be dramatically more efficient.

Letting smart weapons think for themselves — let alone make plans together — might be more than a little unnerving. There are alternatives: Some existing weapons already have datalinks to let human operators retarget them in flight. But against an electromagnetically sophisticated adversary, jamming might cut the humans out of the loop. The only option available might be short-range communications between weapons in the same salvo, or even radio-less “swarming” tactics modeled on insects.

The report recommends a host of other measures, such as shuffling F-35B jump jets among multiple bases to avoid attack, building more long-range bombers, and changing how Navy ships defend themselves from enemy missiles. But for Washington policymakers who’ve come to take smart bombs for granted, the study’s most important lesson is they can’t.