On Tuesday, the chief of US Pacific Command had told the AFCEA-USNI West 2017 conference here that he wanted the two services’ systems to interconnect. “I believe that Army missileers should incorporate their air defense systems into the Navy’s integrated fire control – counter-air, or NIFC-CA, architecture,” Adm. Harry Harris said. “I’ll be the first to tell you that I’m not a technical guy, so I don’t know how to make it work.”

We can make it work, the expert panel said the next day when asked about Harris’s idea. “It’s not hard,” said Anant Patel, a senior program manager in the Navy’s Program Executive Office – Integrated Warfare Systems (PEO-IEWS). “We’ve cracked the nut on how to integrate systems together, we understand what quality of service we need to engage a specific threat, so I think that’s the easy part to go work on with Army.”

The hard part, Patel continued, is “connectivity(:) That’s a tough, tough question because it all depends on the latencies and accuracies of the networks, so you have to look at a specific threat, what kind of reaction time do you have (and therefore what kind of network lag you can afford). It’s not as easy as, I’ll just give you the data.”

Missile defense requires exquisitely accurate data on the target, because you’re trying to hit one missile moving at hundreds of miles an hour with another missile moving at hundreds of missiles an hour. A tiny error can mean a miss. The worst mass casualty incident in the 1991 Gulf War, a Scud strike on a Dhahran barracks that killed 28 Americans and wounded another 98, occurred because a software glitch made a Patriot missile’s timing 0.3433 seconds off. 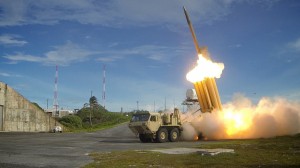 So before you add a new sensor to your missile defense system, you need to know how accurate that sensor’s data is and how quickly your network will transmit that data from sensor to weapon. Accurate data that’s delayed by a slow connection is as bad as inaccurate data that arrives at once. Adding more sensors of different types and from different locations gives you more perspectives on your target and can improve accuracy, but you’d better understand those sensors first.

That takes testing, said Cmdr. Andrew Thomson, who also works for PEO-IWS. “That takes time to really take that sensor to sea or wherever it is and understand it, make sure that it’s delivering the quality of service that you need, what the latencies are and what the accuracies are in the networks you’re using, and then what the weapon system is going to be able to do with that,” Thomson said. “Every time when you bring in a new sensor or you bring in a new weapon or sensor, you’ve got to kind of work through flow.”

“I don’t think we’re going to get to a place where we’re quite plug and play,” Thomson said. “It’s always going to take that engineering.”

NIFC-CA has already made some progress with the Army. In a 2012 test, the Army’s now notorious blimp-mounted JLENS  — “a great radar,” said Patel — provided targeting data via NIFC-CA to a Navy SM-6 Standard missile. In another test, the Aegis destroyer Hopper connected to Army AN/TPY-2 radars — normally used for THAAD missile defense batteries — and shared track data back and forth, said Capt. David Snee, then commander of the Hopper but now director of integration and interoperability on the Navy staff (OPNAV N9I). The Hopper’s success, in turn, built on close Army-Navy cooperation during THAAD’s development to ensure it would be interoperable with Aegis, said retired Rear Adm. Brad Hicks, now with Lockheed Martin.

Ironically, back at the start of the NIFC-CA effort, the Navy tried to get the Army and Air Force to participate and make it a joint effort, but that “failed miserably,” Hicks said. Today, the Army is in fact developing its own missile defense network, called IBCS, to link its disparate systems such as Patriot and THAAD. “It’s late. It’s over budget. They’re going to get there eventually,” Hicks said of IBCS. “In theory it’s joint, but we don’t know yet because there’s nothing in their test program to make it joint that I’ve seen.” It would be great, he said, to have close cooperation between the Navy and Army on developing IBCS, just as happened on THAAD.

Bringing Army missile defense into NIFC-CA “probably” doesn’t require waiting for ICBS to be developed, however, Patel said: You could connect existing Army systems to NIFC-CA one by one in an incremental “baby step” approach.

In the longer run, NIFC-CA could even evolve beyond the “counter-air” focus embodied in its name and become an offensive fire control network, not just a defensive one. The Navy and the Pentagon’s Strategic Capabilities Office have worked together to modify the SM-6 version of the Standard Missile, a high-performance interceptor designed to shoot down incoming missiles and planes, and make it capable of striking surface ships as well. The targeting data for the successful test was relayed via NIFC-CA network, which didn’t require any modifications to do that mission, Patel said.

If NIFC-CA can similarly bring in other surface-to-surface missiles, like the Army’s ATACMS, it might evolve into an all-purpose, all-service system of fire control that can either shoot down enemy missiles in flight or blow them up preemptively on the launcher.