‘Year Of The Radio’: Battle On For 3 Key Army Contracts 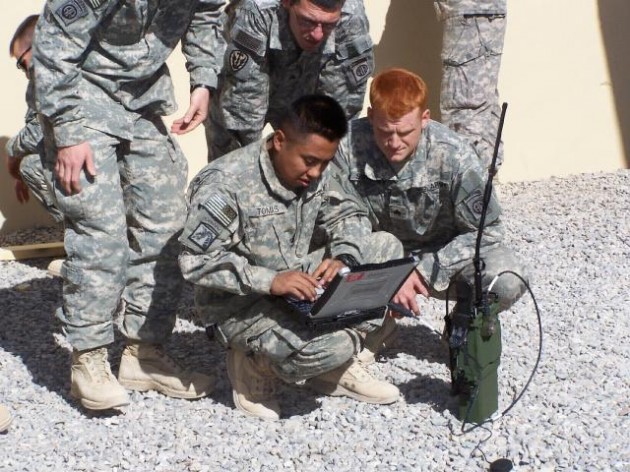 Part outsider, part incumbent, Harris Corp. is eagerly upsetting applecarts by taking on defense industry colossus General Dynamics and other established contractors in its bid to grab a hat trick in this year’s Army radio competitions. The largest service is expected to make awards in three of its largest communications programs this year as early as this summer

“This is the year of the tactical radio,” declared Dennis Moran, the retired Army general and signals officer who is vice-president for government business development at Harris.

Moran and company seem flush with confidence. The reason is obvious in the case of the MNVR, where the Army has already bought and fielded thousands of Harris’s AN/PRC-117Gs as an interim vehicular radio for units such as the 10th Mountain Division, specifically and explicitly to fill the role until the MNVR came online. Other competitors for that contract are likely to include General Dynamics, Raytheon, and BAE.

On the Rifleman and the Manpack, however, General Dynamics is the incumbent, having already sold thousands of each radio to the Army under low-rate initial production (LRIP) contracts. (Thales, technically a subcontractor, has split the Rifleman orders with GD). That would seem to put GD in prime position. But the Army and the Pentagon’s independent director of Test & Evaluation have been less than thrilled with the GD-Thales Rifleman and outright frustrated with the General Dynamics Manpack.

Both Rifleman and Manpack have now been thrown open to all-comers competitions. While Harris isn’t an incumbent on either, it feels it has both feet well in the door. It already supplies a kind of big brother to the Rifleman Radio, a larger and more secure handheld radio called the AN/PRC-152 that’s used for classified communications (the Rifleman is deemed secure enough to transmit “sensitive” information but not “secret”). For on the Manpack, meanwhile, Harris is developing a new version of the same PRC-117G mounted on vehicles.

There’s already a backpack-portable version of the PRC in service with foot troops in Afghanistan (as pictured above), but it only supports a single channel, whereas the Army insists the Manpack must have two. It’s technically possible to kludge two PRC-117Gs together to produce a single two-channel radio, and Harris has done it, but pity the poor soldier who has to carry the awkward, heavy hardware.

“That’s one of the shortcomings of the one-channel [PRC-117G] and the Army has been very firm on its requirement for a two-channel [Manpack radio], so Harris Corporation, like other companies will offer a two-channel solution,” Moran  said, although it’s still in development: “The product I am describing I have not formally launched yet.”

There have been some tough lobbying battles on Capitol Hill, with General Dynamics and Rockwell Collins campaigning to put requirements on competitors that would effectively keep Harris out. One attempt was defeated last year, but they’ve tried again this spring. Rockwell in particular circulated slides arguing that Harris’s “commodity radio” was not up to the performance required for a military-grade “complex radio” like the Manpack.

One thing all the companies seem to agree on, at least, is that the Army’s current winner-take-all plan for the Manpack competition is flawed, because it would lock in a single supplier for five years. Moran would prefer “a multi-vendor, and I emphasize multi-vendor, IDIQ [indefinite delivery, indefinite quantity contract]” in which several qualified companies, all of which meet the minimum requirements, compete on both quality and price for particular lots of radios the Army wants to buy. “A single vendor for a five year contract is not going to create that kind of competitive environment,” Moran said.