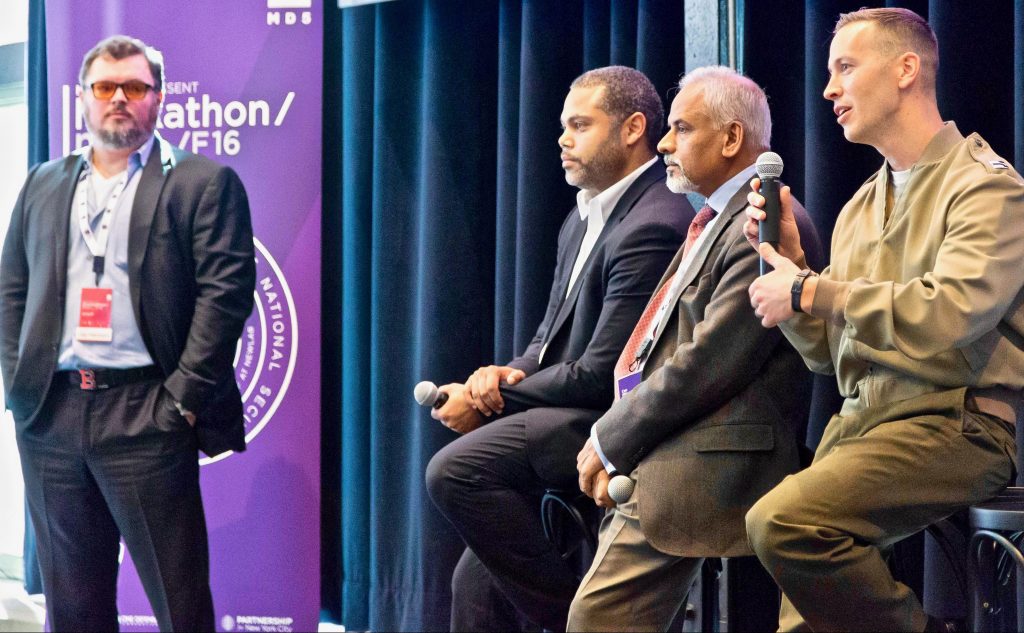 Adam Jay Harrison (standing at left) moderates a panel on defense innovation with a Pentagon civilian, an academic, and a military officer (seated at right)

The goal? Instead of heartwarming but inconclusive “outreach” to innovators in Silicon Valley and beyond, Adam Jay Harrison wants to actually turn their neat ideas into mass-produced, military-grade tech. That requires hybridizing outside creativity with insider expertise to get promising projects across what’s called the “valley of death” between conception and production.

“I get really irritated when I’m in the audience and I hear ‘startup, startup, startup,'” Harrison said this morning at the National Defense Industrial Association (NDIA).

“Startups are not the only source of ideas,” he said. “Our labs, our DECs (Development & Engineering Centers) produce disruptive new things we need to be capitalizing on…just as much as startups.”

Yes, Army Futures Command absolutely wants to connect with outside innovators through high-profile events such as the how-to-kill-drones hackathon Harrison himself ran just last month, he said. But experienced insiders — like most NDIA members — are essential too, because they know how to navigate the complex Pentagon process, protecting the big-idea guys from the bureaucracy and securing funding. We need “people like you mentoring these bright young innovators,” he said, “participating on teams to help us come with the ideas that need capitalizing.” 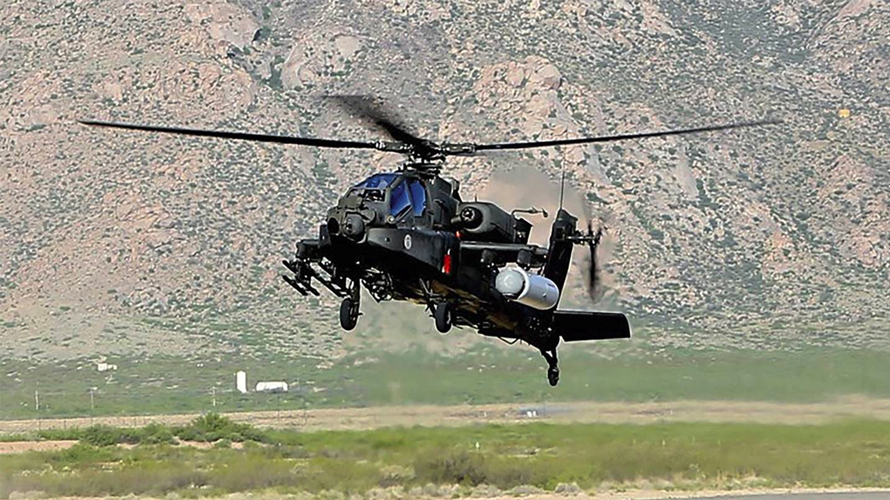 That’s where Harrison’s new venture comes in. The Army Applications Laboratory (AAL) is what he calls a “concierge service” to bring in innovators and connect them to people in the Army with the money and authority to turn their neat ideas into reality.

In official language, AAL is “the Army proponent for disruptive innovation.” While it may sound like a meaningless buzzword, “proponent” in Army-speak is a very specific term of art. It means, in essence, a permanent organization responsible for improving a specific Army function — artillery, airpower, infantry, etc. — and ensuring that stuff actually gets done, from writing new field manuals to fielding new equipment.

“Disruptive,” in this context, primarily means technology that the Army hasn’t already recognized as an official priority by identifying threats, writing requirements, creating acquisition programs, and so on. (If there’s already a vetted requirement and it’s officially defined as a “capability gap” in need of a solution, Harrison said, selling your idea to the Army is pretty easy). As the proponent, the lab can help get requirements written for promising new capabilities, connect innovators to money and decision-makers, and scale up one-off experiments, demonstrations, and prototypes into sustained programs of record.

Harrison doesn’t expect most of the neat ideas the lab sucks in to come out again as fielded combat systems. But all of it, he said, will provide intelligence on the art of the possible for the Army to consider as it decides what, ultimately, to build. 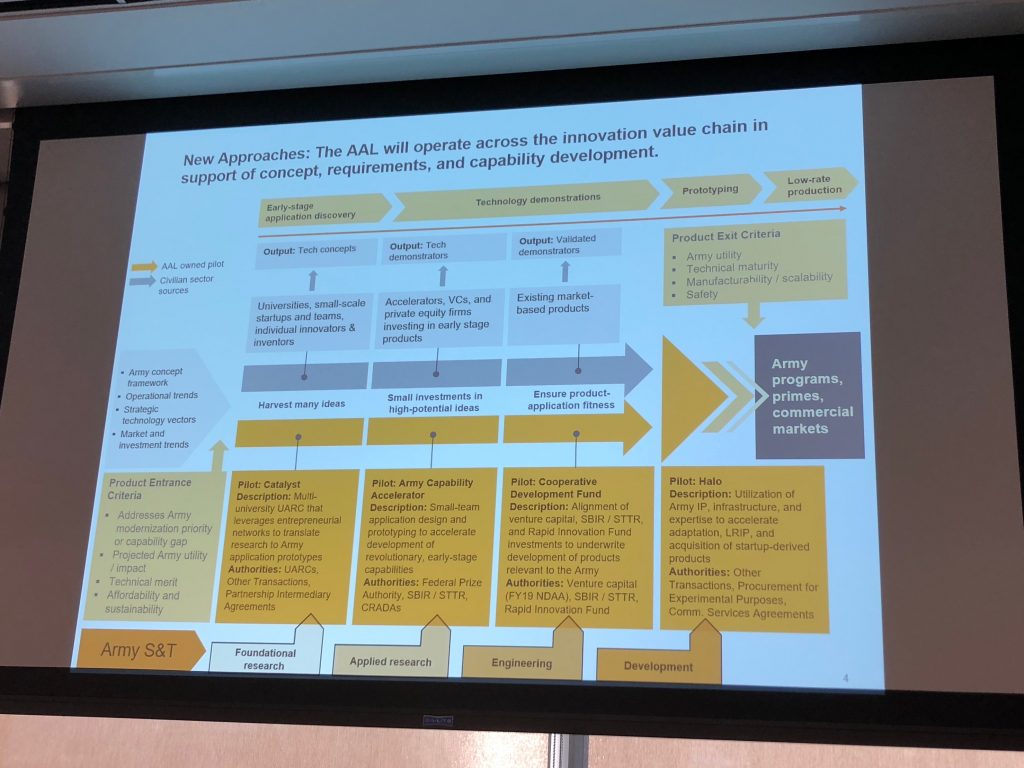 The work has just begun. The Army Applications Lab is one of the few parts of Army Futures Command that’s being created from scratch, rather than repackaged out of existing organizations, and it’s still in flux. “My No. 1 job right now is trying to get NIPRnet access for employees,” Harrison said to rueful laughter.

“We are very sensitive to running the flag up and getting expectations way out of whack,” he said. “None of you probably heard of the Army Applications Lab (we did -ed.) before I walked in here, and that’s kind of on purpose.”

In a month or two, the lab will post a formal Broad Agency Announcement (BAA) to serve as an official invitation to contractors, but, “we’re just starting to get to the pint where we can start to have meaningful conversations with people,” Harrison said. “We’re probably about six months away before we can actually help.”

But the lab is already launching a series of significant pilot projects. All embody the principle of connecting outside innovators with neat ideas to experienced insiders who can make them happen. Each offers a potential point of entry for tech the Army might not otherwise find out about, but each catalyst is aimed at technologies at different stages of evolution. (The four pilots form a logical sequence, but you don’t have to do them all in turn: any given company can enter any pilot, based on the maturity of its technology).

Catalyst is the pilot for the least mature ideas, the foundational research: what Harrison calls the intriguing possibilities that are still “unstructured (and) unproven.” It will build on the existing Army Research Laboratory “open campus” program by reaching out to university communities — academic researchers, student entrepreneurs, that startup two professors have in their garage — and connect them to the Army and defense industry. The initial focus will be on Austin (home of Futures Command HQ), Boston, and Berkeley, Calif., but the ultimate plan is to go nationwide.

Here’s one model of what Catalyst wants to build on. Just a few months ago, Harrison said, Uber, the Army, and the University of Texas signed a Cooperative Research & Development Agreement (CRDA) on fluid dynamics modeling for future rotorcraft. (Uber Elevate is the ride-share company’s nascent air taxi project). “That opens up a whole new world of potential collaborators,” he said — but “it would have been even better, quick frankly, if we’d had some defense industry folks in that agreement as well, to provide the product pathway for whatever the research is that comes out of that.”

The next phase is Army Capability Accelerator, which focuses on applied research. This is where teams of combat soldiers, entrepreneurs, researchers and defense industry veterans collaborate to produce an actual working prototype that real troops can field-test in realistic conditions. A successful team might hand off the technology to established players or become its own startup company, Harrison said.

The Accelerator is already launched in New York City, he said. The Army’s long been worried about urban warfare, and now it’s using NYC’s sprawling subways, sewers, and other subterranean infrastructure “as a testbed to demonstrate a range of different products and technologies” to help soldiers navigate, survive, and prevail underground.

The model here is venture capital, specifically the early phase with lots of small grants to let the proverbial 100 flowers bloom: $50,000 to $100,000 in direct Army funding, plus access to Army test infrastructure, experts, and decision-makers.

Larger capital investments will flow through the Cooperative Development Fund, which will support engineering projects by emulating the latter, large-scale phases of venture capital funding. The fund will largely reorganize funding programs that already exist, like the Small Business Innovation Research (SBIR) program, Harrison said, by “lower(ing) any barrier to participation.”

All too often, Harrison said, participating companies say the SBIR process is too bureaucratic, too burdensome, and too slow to cough up actual cash. Established defense contractors can cope with that kind of delay and overhead, but small businesses can’t. In fact, he said, today too many SBIR contracts go to a “cottage industry” of companies that specialized in navigating the complex process, with their whole business model based on getting one “innovation” grant after another without ever making the transition to a final product troops can use.

Instead, “we need to be treating SBIR like the Army’s venture capital fund,” Harrison said. Yes, the Army has tried this before, with the Army Venture Capital Initiative, he acknowledged, but “we are resetting that and looking for ways we can deploy appropriated dollars into high tech opportunities.”

The final phase is the Halo Manufacturing Accelerator, which will focus on development of actual, fielded weapons, sensors, and other systems. Halo will launch in spring 2019 with projects to develop both small drones and engines for larger unmanned aircraft.

The hurdle here is all the requirements the Pentagon enforces on companies that want to make stuff for it. We’re not talking just about the Federal Acquisition Regulation (FAR) contracting process, Harrison said, though that’s bad enough, “but all the other stuff” from military specifications (MILSPEC) to safety releases. Navigating this takes time and expertise, which translates into overhead, and most venture capitalists prefer their startup avoid the defense market altogether rather than take on such burdens. Halo will offer an alternative. Let the idea guys focus on their ideas, but bring in traditional defense contractors and Army institutions to handle the red tape for them, rather than the startup having to build that kind of overhead in-house.

This pilot is still in the brainstorming phase. “We’ve started to form up a tiger team within the Army to pull in RDECOM (Research, Development, & Engineering Command) and other sources of expertise to help us think through the problem,” Harrison said. “And then we’re looking to pull in defense industry to the conversation. This point is where we really start to see real opportunities for defense industry to partner with startups.

“We’ll be engaging with NDIA and others to solicit participation,” Harrison said. “Stay tuned.”