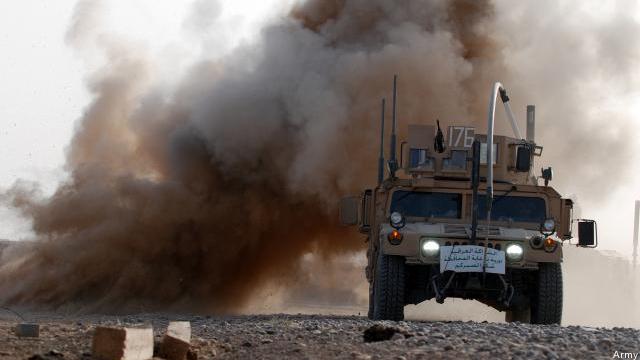 FT. LAUDERDALE: With the Army’s Humvee modernization plan a thing of the past, service leaders now plan to pour billions into sustaining what’s left of the venerable combat truck fleet.

The current roster of combat-ready Humvees in the Army’s arsenal is “still sustainable” to carry out a wide range of missions, from air assault ops to humanitarian and disaster relief, Kevin Fahey, the program executive officer for combat support and combat service support, said last Thursday. But keeping the fleet at that level of readiness “for the sustainable future” will take some investment on the Army’s part, he told reporters during last week’s Association of the U.S. Army’s annual symposium here. To that end, Army leaders plan to shift the remaining funds from the Modernization Expanded Capability Vehicle program — the official name of the Humvee upgrade effort — into vehicle sustainment, Army Project Manager for Tactical Vehicles Col. David Bassett said at the same event.

Pentagon acquisition officials spearheaded Army’s decision to terminate MECV program earlier this month, as part of the Army’s fiscal 2013 budget plan. The Army already decided to ramp down the MECV program — from 50,000 to 100,000 vehicles down to roughly 6,000 for air assault missions — to make way for the Joint Light Tactical Vehicle’s entrance into the fleet. Senior service leaders, including Army Secretary John McHugh and Chief of Staff Gen. Ray Odierno, have repeatedly stated JLTV is the future of the Army’s tactical vehicle fleet.

With the MECV cancellation, the air assault mission will now be filled by the JLTV and unarmored versions of the Humvee, Bassett said. The JLTV can be airlifted alongside Army airborne troops in “standard conditions”, according to Bassett. For missions where the vehicles need to be inserted at high altitudes or in sweltering heat — or basically the “high and hot” conditions in Afghanistan — uparmored Humvees will be used. However, those vehicles will not have the same level of protection as the JLTV or the now-defunct MECV against roadside bombs. The Army’s answer? They simply will not use the uparmored Humvees in air assault missions where improvised explosive devices may be used, Bassett said. How exactly the Army plans to avoid IEDs, which have become the No. 1 cause of casualties for U.S. and coalition forces, during high-and-hot air assaults, Bassett did not say. One thing he and Fahey did say is the Army can’t waste anymore time getting the JLTV into the field.

“The number one risk to a program is time,” Fahey said on the Army’s ongoing JLTV work. His comments come weeks after Ford Motor Company dropped its bid for the next-generation combat vehicle. Ford claims the Army’s inability to extend its deadline for design proposals essentially forced the company out of the running. For their part, Ford officials never expressed the need for more time — up to 12 months — to Army officials until the proposals request was issued earlier this year, Fahey said. If program officials had conceded to Ford’s request, it would put the rest of the JLTV competitors at a disadvantage, Bassett said. “We have to consider the industry as a whole,” he added.