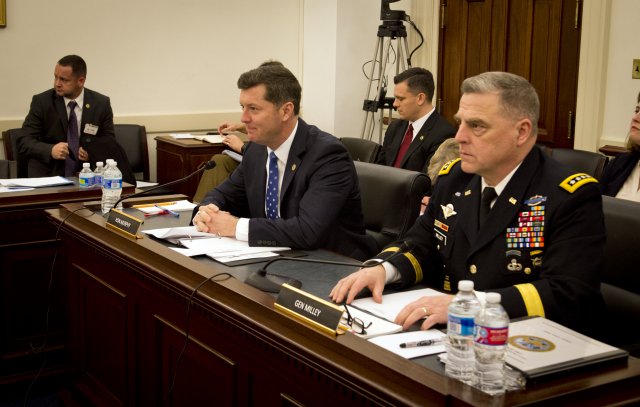 WASHINGTON: The Army will ask Congress to change current law to help it buy weapons better, Maj. Gen. Bill Hix told reporters. Sure, the service can do and is doing a lot with its existing authorities, he said, such as create a Futures and Modernization Command (FMC), but comprehensive reform requires more. In fact, Lt. Gen. Ed Cardon’s handpicked taskforce on acquisition reform — which Hix just joined this week — has a subunit specifically dedicated to finding laws and regulations that need to change.

“We have a legal team and a process team,” Hix explained after a panel at the Atlantic Council Wednesday. “The process team’s job is to say what is it I want to be able to do…. Then the legal team is supposed to identify where we can and can’t do that, and where we can’t do it, to start working with the legislative process to allow us (to).” 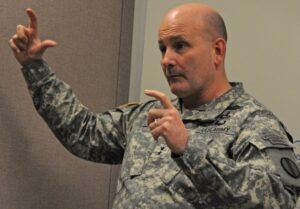 The Army’s acquisition system took its current shape in 1973. The governing statute was last comprehensively reformed in 1986 by the Goldwater-Nichols Act and the Packard Commission. With new threats and new technologies, the world has changed dramatically since then. The system hasn’t.

Will the task force want to change the role of the civilian Service Acquisition Executive, aka the Assistant Secretary of the Army for Acquisition, Technology, and Logistics (ASAALT), which oversees all acquisition programs? “I won’t tell you we have the answer, but that is something we’re looking at right now,” Hix said. “The legal authority, the responsibility of the Army Acquisition Executive — barring a significant change in our Congress — is not going to change, and we recognize it.”

That said, Hix went on, there is considerable leeway to reorganize while still retaining the assistant secretary’s statutory authority. After all, the same laws apply to all three military departments, but the Army, Air Force, and Navy (which includes the Marine Corps) organize their acquisition systems very differently under their respective service acquisition executives.

The Navy, for example, has seven major “systems commands” divided by function — NAVSEA for ships, NAVAIR for aircraft, ONR for long-range research, and so on — which all report directly to its Service Acquisition Executive, the Assistant Secretary of the Navy for Research, Development, & Acquisition.

“I’m not saying we’re going to do it like the Navy (or) the Air Force,” Hix said: Buying ships and fighter jets is very different from, and much more costly than, buying tanks and guns, so you can’t copy and paste the org chart. “But,” he said, “we’re going to take the best practices.” 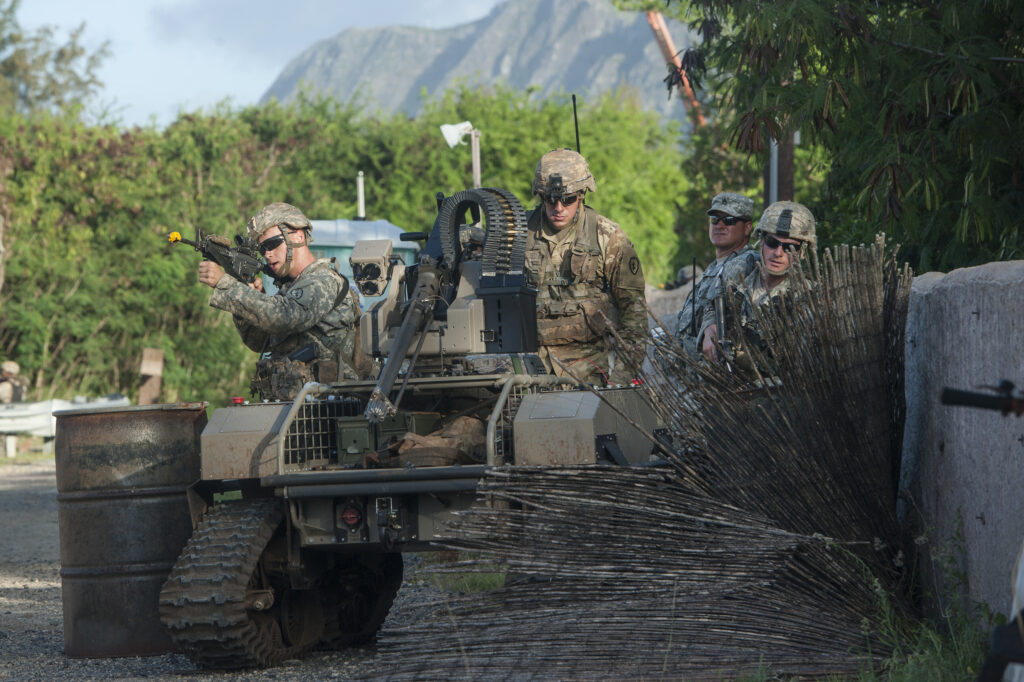 Hix is helping design the headquarters of the Futures and Modernization Command (FMC) that the Army will stand up next summer. Having been the service’s senior strategist until last week, he is now a “minister without portfolio” on the acquisition reform task force.

A crucial concept: The FMC headquarters will coordinate widely scattered organizations without requiring that they physically relocate, Hix said. (That echoes what Under Secretary of the Army Ryan McCarthy told me in an exclusive interview). 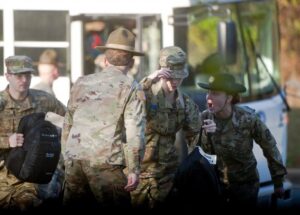 Currently, Training & Doctrine Command operates schoolhouses, each of which performs a wide range of functions for a particular type of troops. Fort Benning, Ga., for example, is TRADOC’s Center of Excellence for infantry, armor, and cavalry scouts, for which it does everything from basic training, to continuing education, to developing doctrine and future warfare concepts, to writing requirements for new equipment. Fort Sill in Oklahoma does the same for field artillery and air defense, Fort Rucker, Ala. for helicopters, etc.

After the reorganization, Hix said, the experts in new concepts and requirements — (the Combat Development & Integration Directorates) may well report to the new Futures & Modernization Command instead of to TRADOC. But even if they do, he went on, they’ll stay at the schoolhouses. That way all the infantry experts will stay at Fort Benning, all the artillerymen at Sill, all the helicopter types at Rucker, and so on.

Likewise, various weapons programs and research laboratories may report to FMC, but they’ll physically stay where they are, co-located with related Army organizations and private industry. For example, “the Tank-Automotive Research, Development, and Engineering Center up in Warren, Michigan isn’t going to move,” Hix said. “They’re going to (stay) where TACOM is (Tank-Automotive Command), where the focus of automotive innovation is in the Detroit area.”

“The key for us is linking those folks together, under a unified concept and idea, without the friction of being under different commands with a different set of incentives and priorities,” Hix said. “We’re trying…to unify those activities without breaking the connections they have to the functions that they serve.” 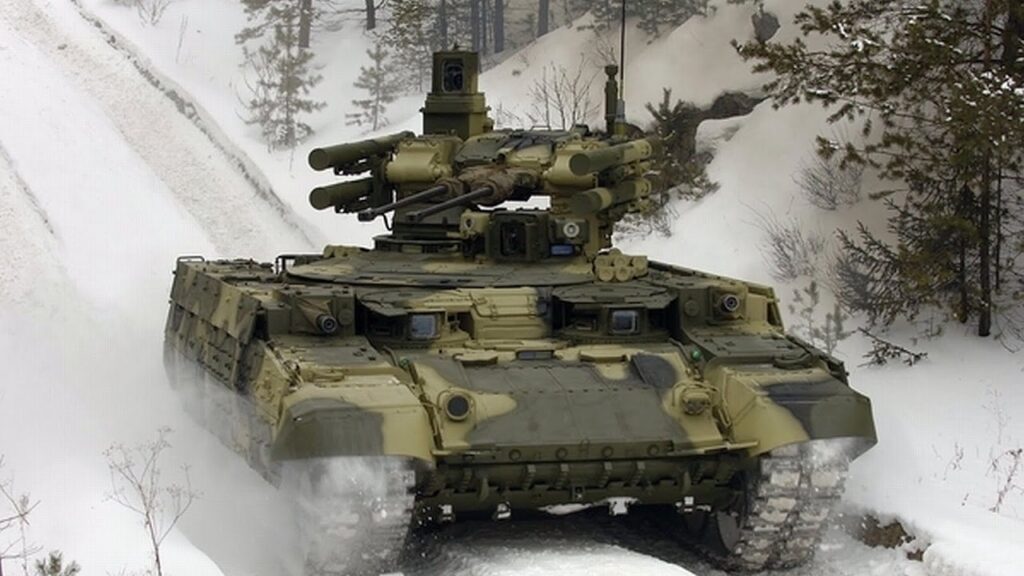 Why is the Army going through all this? Because the way it buys new weapons is too expensive and too slow, even by Pentagon standards. After two decades of cancelled programs, the Army now faces increasingly high-tech adversaries with the tanks, artillery, and helicopters it had in the 1980s, albeit with much-upgraded electronics. 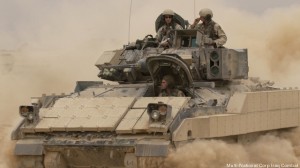 But here’s the dilemma. The Army needs new equipment for future fights, which will take time and money to develop — but it also has to be able to “fight tonight” with its current kit, which means spending money to maintain, sustain, and upgrade it. While the Army wants to completely overhaul its wireless command-and-control systems, for example, it is seeking short-term patches to make its existing networks work better ASAP. Similarly, Hix said, while the Army is exploring an all-new Next Generation Combat Vehicle, it may need to upgrade its M2 Bradley with a new engine and a new gun as a stopgap.

Hix sees three distinct but overlapping threats waxing and waning over the next thirty years. In Army strategic planning, he told the Atlantic Council audience, “we’ve extended the horizon to 2050, and we see ourselves involved in three compounding fights”:

Counter-terrorism and counter-insurgency are an enduring “generational” struggle, Hix said. So that it will overlap the Russian threat, which Hix expects to last at least another 20 years — until about 2035 — before demographic decline and overdependence on oil potentially take their toll. Meanwhile, he said, China will be building up its land forces and boots on the ground around the world: “We think ’35-40 is probably when we need to worry about them.” 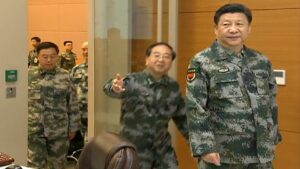 That timeline exhibits some Army idiosyncrasies, even parochialism. For the Navy, China is more urgent than Russia, while for the Air Force, they’re about equal. But the Army plays only a supporting role in the Pacific — though that may grow with new anti-ship artillery missiles — so China looms less large until it becomes a global land power. While the world has focused on the South China Sea, Beijing is also expanding its influence in Central Asia, Africa, and Latin America, he said.

“They’ve worked on their air force and their navy, now they’re thinking about their army,” Hix said of China. Beijing has declared it wants a “modern army” by 2035 and a “world-class army” by 2050,” he said: “World-class means better than ours.”

Staying ahead means not only going faster, but changing course. “We have been optimizing industrial-age mechanized warfare for a century,” Hix said, and the return on investment is getting low.

So the Army needs to explore new options where the return on investment is high. That requires new technologies, Hix said, from hypersonic missiles to lasers to robots. The current acquisition system, optimized for the industrial age as it is, can’t keep pace with the information revolution, Hix said. That’s why the Army needs to overhaul it, laws and all.