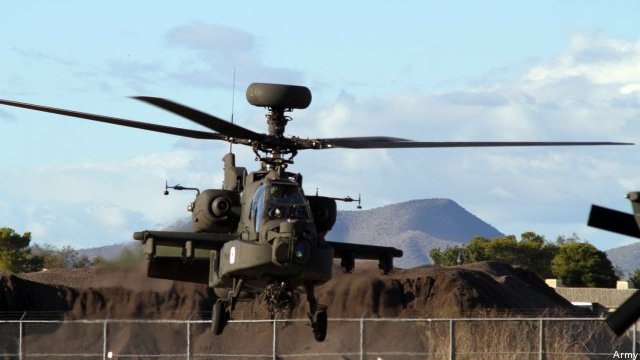 The Army has altered the name of the latest-model Apache attack helicopter for the second time in recent months — and once again missed a grand opportunity.

Last fall, the service redesignated the AH-64D Apache Longbow Block III, calling it instead the AH-64E Apache, aka AH-64 Echo, in recognition of its greatly increased capability compared to the AH-64D Block II. Now comes an Army news release revealing that the Apache Project Office has given the Echo model a nickname as well: “Guardian.”

“Guardian,” the release explains, was suggested by Gina Gill, a logistics management specialist at the Army Aviation and Missile Command Logistics Center at Redstone Arsenal, Ala., who won a “name the new Apache” contest. “Although the Apache is known as the deadliest helicopter, it is much more,” Gill wrote. “The Apache functions as a safeguard for our soldiers on the ground. It seeks and eliminates threats that would otherwise be undetectable and/or indestructible, allowing our troops to complete their missions. The Apache is our soldiers’ guardian in the sky.”

All true enough, but we at Breaking Defense think the service and Apache maker Boeing Co. should have gone with the nickname the Taliban gave the AH-64D Block II after seeing what its 30mm chain gun firing 640 rounds a minute, its laser- and radar-guided Hellfire missiles and its unguided Hydra 70 2.75-inch rockets can do.

“The Monster is here!” a Taliban lookout could be heard shrieking over the radio last year as an Apache arrived to provide close air support for some U.S. troops. “The Monster is above my head now! Do not move or you will die!”

“Guardian” is very noble and all, but “Monster” — that just has a ring to it.