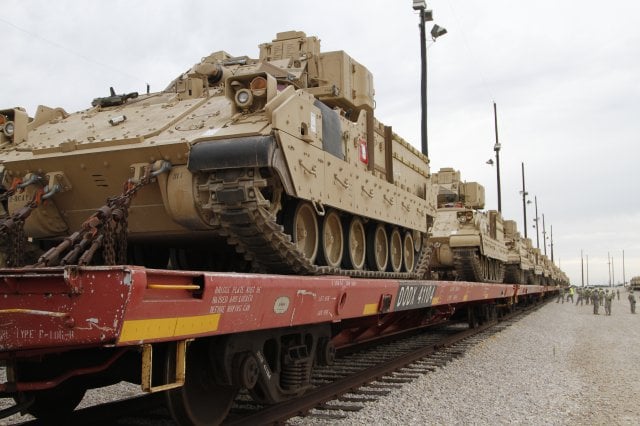 Bradley armored vehicles from the 1st Cavalry Division shipped out in August for Eastern Europe.

WASHINGTON: The Mideast may have the spotlight right now, but it’s not the only area that has the Army of Chief of Staff worried. In an uncanny parallel to the 1990s, the end of a large-scale ground deployment — in Europe then, in Iraq and Afghanistan now — has led to steep Army budget cuts even as multiple new missions, smaller but demanding, pop up all around the world. With new threats arising and complexity increasing as funding declines, Gen. Ray Odierno said, a new “Army Operating Concept” will help reorient the service for the post-Afghanistan era.

That’s a broad and curious mix of missions, from old-school Cold War deterrence, to post-9/11 counterterrorism, to what sounds unnervingly like the first chapter of an apocalyptic science fiction novel. “It’s very clear the disease is accelerating faster than we initially thought,” Odierno said of Ebola. But diverse, far-flung, and simultaneous missions is what the new Army doctrine expects to characterize the future, rather than the traditional focus on one or two all-consuming “major theater wars.”

“Where in the past we focused on maybe one big fight somewhere, the new Army Operating Concept [says] we have to be able to do multiple small-scale things simultaneously,” Odierno said, “so for example we might have to operate with smaller capability on four different continents at the same time.”

“You’ve got to be a bit more flexible, a bit more adaptable,” Odierno continued, summing up the new concept. “You have to be able to get there quickly. You have to develop new capabilities in understanding the economic, cultural, and political environments simultaneously.”

Odierno said such these complex missions require extensive high-level interaction with local and international partners, so they need high-level leadership cadres drawn from divisional headquarters, which have become “one of the real stress points on our Army.” But no one’s deploying full divisions of 20,000-plus soldiers. The Ebola mission, for example, will grow in the thousands within 30 days, Odierno said, topping out at a target (for now) of 3,000 troops.

The new headquarters being considered for Europe would provide high-ranking oversight and international coordination for what are likely to be ongoing rotations of brigade-sized forces to Eastern Europe. Currently, the light infantry of the Italy-based 173rd Airborne Brigade is about to be replaced by heavy armored forces from Fort Hood’s 1st Cavalry. Tanks deploying from the US to Europe is a faint echo of the Cold War, but it’s a far cry from the massive REFORGER exercises of the 1980s: The “reassurance” deployment will stay at only 600 soldiers.

The Iraq mission is now at 1,600 personnel from all the services — not just the Army — and “I don’t think there’s a rush to have lots of people in there,” Odierno said. This is a marathon, not a sprint, and requires deliberation, he said, citing the President’s remark that “degrading and destroying” the self-proclaimed Islamic State could easily be a three-year effort.

That effort will require someone‘s ground forces to retake Iraqi cities, but “I did not say we need US divisions and brigades on the ground to do this,” Odierno said, clarifying his recent comments to the Senate Armed Services Committee. “Iraqi security forces are capable of doing this. We’ve watched them do it” in the past — with US assistance — and they can do it again if the new, more inclusive Iraqi government  can convince them it’s worth fighting for, he said.

But will the Iraqis need American forward observers and special forces on the frontline with them once more, if only to call in airstrikes? “We’ll have to see….The worst thing that can happen for us if we start killing innocent Iraqis, innocent civilians,” Odierno said. “So far, it is so good, but to be honest with you the targets we’ve gone after have been targets that are very clearly identifiable: they have military equipment, they’ve been out in the open, [but] they are going to start infiltrating back into the population.”

To man all these missions, the Army currently has 510,000 troops, down from its wartime peak of 570,000 and on track to 450,000 by the end of 2017. If the automatic budget cuts known as sequestration return in fiscal 2016 — as is currently the law — then the Army will diminish to 420,000. But Odierno’s greatest concern is less about the total number of troops than keeping what he has well-trained.

“I’m taking endstrength out as fast as I possibly can, 20,000 a year,” Odierno said. “I’ve already cut our modernization budget by 46 percent. So it’s going to come out of readiness.”

During sequester’s first bite back in 2013, the Army went down to three brigades fully trained, ready, and available for unexpected crises. (Odierno tends to say two brigades, but he isn’t counting the 82nd Airborne’s Global Response Force for various arcane reasons of great interest to some people). “There are about 14 brigades [ready] now,” Odierno said. “We’ll be able to sustain that in ’15, but in ’16 we’re going to go right back to where we were.”

Total numbers still matter, of course. “I testified last year [that] if we have to go to 450,000 in the active component it is significant risk. and if we go down to 420 we cannot execute our current strategy,” Odierno said. “That was before ISIL expanded itself [and] before we had the Russian incursion in Ukraine….The risk actually has increased.”

Updated 4:15 with precise number of soldiers (600) on “reassurance” deployments in Eastern Europe.