UPDATED. WASHINGTON: As the Pentagon scrambles to figure out how to harvest the benefits of the boom in small commercial satellites, the Federal Communications Commission (FCC) is moving to streamline regulations for small communications satellites.

“I see no reason why a satellite the size of a shoebox, with the life expectancy of a guinea pig, should be regulated the same way as a spacecraft the size of a school bus that will stay in orbit for centuries,” FCC Chairman Ajit Pai told the US Chamber of Commerce today. He said that the draft rules will be available publicly for comment on July 11,

Pai explained that the new smallsat regime would “enable small satellite applicants to choose a streamlined alternative to existing licensing procedures which would feature an easier application process, a lower application fee, and a shorter timeline for review.  It would offer potential radio frequency interference protection for critical communication links.  It would promote orbital debris mitigation and efficient use of spectrum.  And it would tailor the regulatory burden to the nature of the deployment.”

The FCC will vote Aug. 1 on a new draft rule that will set up a streamlined licensing system for commercial communications satellites that weigh less than 180 kilograms (about 400 pounds), and that can be de-orbited within six years when they lose functionality.

The FCC is charged with granting licenses to US communications satellites and with managing access to spectrum for radio, television, wire, satellite and cable. While technically independent, the chair and all four commissioners are appointed by the president and confirmed by the Senate. Pai and two commissioners currently serving were appointed by President Donald Trump; two by President Barack Obama.

DoD and the Intelligence Community (IC) have a plethora of initiatives and experiments underway to harness both technology and agile manufacturing techniques from commercial companies. DoD is also exploring the possibility of using large constellations of small satellites in Low Earth Orbit (LEO) to either back-stop or take over some DoD missions from the current architecture of large, expensive, highly complex and extremely vulnerable national security satellites.

But there is continuing discord within DoD and the IC about whether reliance on commercial providers for so-called “proliferated LEO” architectures is a viable strategy, due to concerns about whether there is a sustainable commercial marketplace for the myriad start-up projects. The FCC’s proposed rules are designed to make it easier, and quicker, for companies to enter the marketplace — hopefully helping them to more rapidly be able to make money.

The FCC’s move is in line with the Trump Administration effort, under last year’s Space Policy Directive-2, at regulatory reform for the commercial satellite sector, hoping to promote innovation and industry competitiveness for both economic and national security reasons. Industry has, for the most part, been enthusiastic about the ongoing initiatives.

“SIA commends FCC Chairman Pai and the FCC for their plans to streamline the licensing of small satellites and for their continued recognition of the role satellite broadband will play in bridging the digital divide in America,” said Tom Stroup, president of the Satellite Industries Association, in a press release today. “Thanks to rapid growth and innovation, we truly are seeing a revolution in the satellite industry and streamlining the licensing regime governing the industry can only serve and encourage continued innovation.

“It’s a great sign Chairman Pai came to this forum to announce the new draft regulations,” says Steve Nixon, president of the SmallSat Alliance — which has been active in promoting lower fees and faster processing of licenses. “I’m excited to see the draft on Thursday.” 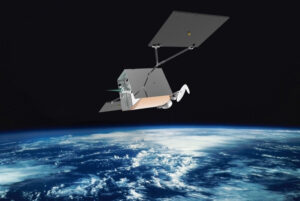 OneWeb plans a constellation of 650 satellites

Pai explained that the proposed smallsat rules would not apply to the mega-constellations being launched by SpaceX and OneWeb. He did not say why, even though OneWeb’s 600 planned satellites weigh only 150 kilograms (about 330 pounds) and thus are under the weight limit for the streamlined regime. SpaceX’s Starlink satellites by contrast weigh 227 kilograms (500) pounds and are too heavy to quality.

He did, however, note that the fact SpaceX has lost contact with three of the 60 Starlink satellites it launched in May is an example of why space operators, including within the US military, are concerned about the potential for a build-up of debris in LEO.

Victoria Samson, Washington office director for Secure World Foundation, explained that while SpaceX’s small number of satellite losses in its initial launch “is a good start,” she said the three dead sats are “still a little concerning just given the sheer numbers of the estimated final constellation — a 5 percent failure rate of 60 satellites is one thing; a 5 percent failure rate of 12,000 satellites is another.”

In addition, scientists have been concerned about problems with being able to identify the individual Starlinks, as they were all launched at the same time. Further, they have not been assigned names by SpaceX, which means its hard for DoD’s space situational awareness (SSA) system to keep tabs on which satellite is which — something that could complicate the ability to provide collision warnings. The Air Force 18th Space Control Squadron keeps the military’s space object catalog, which is used to help space operators avoid potential collisions, as well as to follow the whereabouts of adversary space objects.

The FCC triggered controversy — and internal dissent — with its move last year to rush out a draft ruling on space debris mitigation. This is because its proposed rule-making preempted NASA and the Department of Commerce (which via the National Oceanic and Atmospheric Administration licenses commercial remote sensing satellites), which had been charged by the Trump Administration (under Space Policy Directive-3)  to lead a government-wide review of US debris mitigation rules for satellite operators.

UPDATE BEGINS: A SpaceX representative, while declining to comment on the proposed smallsat ruling, stressed that the company is “sharing accurate forecasts of all active spacecraft to 18 SPCS every 8 hours. Through this interface, these predictions are available for both 18 SPCS & other operators for the purpose of collision avoidance.”

A OneWeb representative, who similarly begged off comments on the ruling, stressed that the company is “happy to see Chairman Pai and the FCC recognizing the importance of responsible space practices, while also taking action to provide regulatory flexibility that can help enable innovation and growth to unlock new solutions and opportunities for people everywhere.” UPDATE ENDS.