Posted by Murielle Delaporte on April 6, 2018

RAAF RICHMOND: Afghanistan and ongoing operations in the Middle East against jihadist terror groups mark the rebirth of the Royal Australian Air Force (RAAF) as probably the most modern and innovative air force among US allies and partners.

The Aussies deployed a new force package during their most recent Middle East engagement, as C-17s, F/A-18As and F/A-18Fs operated with the E-7 Wedgetail Air Battle Management aircraft and the A330 MRTT tanker.  The Aussies have been the lead in introducing to combat operations the KC-30A (their name for the A330 MRTT) , which is now operated by more and more allied and coalition air forces. The French Air Force will gladly welcome their first tanker in the fall at Istres AFB. The RAAF remains the natural driver of how the new tanker operates to support a task force with nearly 10 years of experience under its wing (literally).

During a visit in March 2018 to RAAF Richmond near Sydney, the RAAF’s experience was discussed with the head of the Air Mobility Command of the RAAF, Air Commodore Bill “K9” Kourelakos.

“We have been building upon the lessons learned over fifteen years of presence in the Middle-East, cargo tasking for everyone within the coalition with our C-130s as early as 2003, and C-17s since 2008,” Kourelakos started. “But in the past three years we have experienced a huge capability leap by deploying our new KC-30A Multi Role Tanker Transport straight into the theater utlising an effect-based point of view. Rather than the older concepts, whereby the tanker operated from tanker tracks to support the fighters –when able — we look to fly to the fighters and engage more proactively than does a legacy tanker.”

While Kourelakos highlights the fact that the RAAF is “still on the journey” to integrate such a new asset and capabilities, especially where maintenance predictability and upgrades are concerned, he has a very clear vision about what the next chapter is all about.

It is about “getting every edge you can get”, i.e. to defeat the enemy and provide an integrated effect as part of the kill chain, by becoming a force multiplier via an increasing number of air-to-air refueling operations. The Aussies have invested with Airbus in the development of a new automatic boom which will not only be a safety enhancement, but will boost sortie generation rates. It will allow a better turnaround of all other air assets, whether in terms of munition delivery, close air support, targeting capabilities, etc.

“As the four fighters come to the tanker, by more rapid refueling we save fuel on the fighters, the tanker itself and get the fighters back into the fight,” Kourelakos said. “In addition, we could potentially add a C2 component to provide mission command to the incoming fighter package as well in the distributed battlespace.” 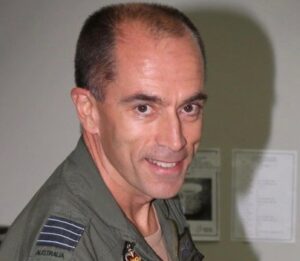 For the Aussies, their experience in the Middle East with this new air combat package is also about “closing the triangle between NATO, the United States and Australia” in terms of interoperability. Kourelakos says the RAAF has de facto become a key force knitting the coalition together by acquiring clearance to refuel more and more aircraft. Today the KC-30A can refuel the F-16, Tornado, F/A-18, E-7, KC-30, B-1 and the F-35A. And at the time of the interview it was acquiring certification for the P-8A. “With the coming of the F-35, we are expanding our work on small receiver operations with fighters”, he noted.

The goal is to keep expanding the number of aircraft the KC-30A can refuel, strengthening the knot already tying RAAF Air Mobility Group to its coalition counterparts, while being a pioneering force with its new tanker for the other coalition partners flying the A330MRTT. In short, the Aussies are leading by example and forging a new path to innovation by putting new assets, such as the KC-30A, into the hands of the warfighter to ensure that new combat capability gets fielded more rapidly than by the older requirements-led process.