Utilizing the UK Terrier in RCBC

If someone has to die, let it be a robot. In particular, clearing obstacles — barbed wire, mines, barriers — under enemy fire is one of the most dangerous things that human soldiers do, so why not let the sappers handle it by remote control? That’s the new way of war the US Army is exploring.

So this week, American and British robots blazed a path for human troops, generating smoke, bulldozing (inert) mines, and filling in an anti-tank ditch so manned vehicles could advance. Held at the Army’s massive training center in Grafenwoehr, Germany, the field experiment will provide useful feedback to US Army leaders racing to develop a prototype armed combat robot by 2019.

One crucial lesson? Instead of the do-anything droids of science fiction — which won’t be real any time soon — this week’s experiment used a small zoo of specialized systems remote-controlled by humans, each with its own modest niche, working closely with each other and human forces: 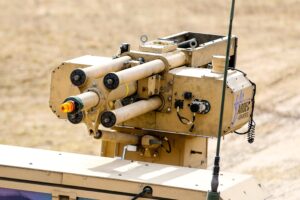 In actual combat, the breaching robots would also have fired a MICLIC, a rocket trailing a long line of explosive charges to detonate mines, destroy barbed wire, and generally flatten obstacles. But the Grafenwoehr range authorities didn’t want the experimenters blowing holes in the landscape, explained Chris Warshawsky of ARCIC (the Army Capabilities Integration Center), so they didn’t use live rounds. There were real human soldiers playing the opposing force (OPFOR), however, using laser-tag-like MILES gear to determine who got hit.

In fact, the robotic experiment was interwoven with a combined-arms operation by human troops and manned vehicles, said Maj. John Dickson of TARDEC (the Army’s Tank-Automotive Research, Development, & Engineering Center). Manned M1 Abrams tanks and M2 Bradleys reconnoitered on the ground while the unmanned Puma flew overhead, Dickson told me, then provided covering fire while the unmanned M58 and Terrier approached the obstacle. Once the Terrier cleared a path, the manned vehicles moved through to continue the advance. 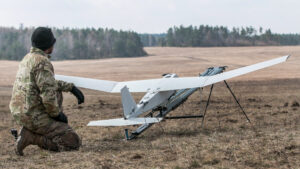 The manned armed vehicles carried the human operators for the robots, as well. The Terrier was driven by a British soldier set up in the back of an American M2 Bradley, parked under cover “a couple of hundred meters” behind the robot, Dickson said. The M58 Wolf smokelayer was driven by an American soldier in the back of an M1058, yet another variant of the geriatric M113. (The 113 family, basically a thinly armored box on tracks, is being replaced as the Army’s tracked workhorse by the much sturdier AMPV, a turretless Bradley). Because the M58 had to drive back and forth to lay a large enough smokescreen, Dickson said, it got up to a kilometer from the command vehicle, without losing contact with its human controllers — even when they relocated to a position with more cover.

The robotic vehicles weren’t autonomous: Each required a human driver controlling its every action, just by remote control instead of sitting inside. If they’d been armed, there would have been a second remote operator to aim and fire, Dickson said, but that wasn’t necessary in this experiment. 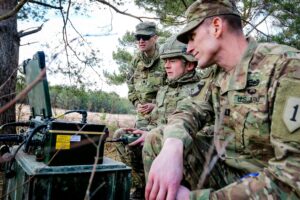 US and US soldiers study the remote control for the Terrier

In fact, breaching obstacles in some ways is an ideal mission for ground robots to start out on. It’s infamously dangerous for humans and has been for centuries: When Henry V urges his men to advance “once more into the breach,” his next line is “or close the wall up with our English dead.” At the same time, however, an obstacle is by definition stationary, making it much easier for robots — remote-controlled or truly autonomous — to cope with than moving targets.

The Robotic Combat Vehicle the Army wants to prototype in 2019 will be armed, so it will probably require two human operators — a gunner and a driver — in the back of a command vehicle somewhere, at least until artificial intelligence improves. Unlike the Terrier and Wolf in this experiment, the RCV will also be designed from the start to be unmanned, allowing it to be significantly smaller (no crew cabin) and more lightly armored (no humans at risk). 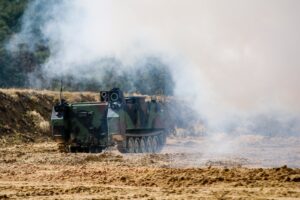 A remote-controlled M58 Wolf releases smoke to cover the operation.

But the Army also wants an “optionally manned” Next Generation Combat Vehicle that can switch between having humans aboard or not, for example in high-risk operations like breaching. The NGCV project could draw lessons from this week’s experiment as well.

There are many unanswered questions about military robotics, some of them fraught. Whether to allow Artificial Intelligence (AI) to control lethal weapons is particularly controversial, and the US military insists it will always have a human in control, even if remotely. Remote control, however, requires the kind of uninterrupted, high-bandwidth connection that sophisticated adversaries like Russia can disrupt. This experiment didn’t include electronic warfare, Warshawsky told me, but other ARCIC experiments do, and the Army will combine the lessons-learned. The abstract ethical, technical and tactical debates all depend on the real-world learning that these experiments can provide.