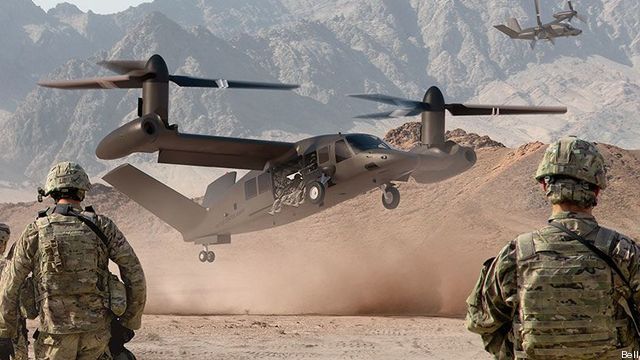 Bell Helicopter has unveiled what may become what everyone hoped the V-22 Osprey would be, a tiltrotor able to operate at high altitudes for long ranges and with easily managed downwash.

The new aircraft, to be known as the V-280 Valor, is the company’s offering for the Army’s Future Vertical Lift technology demonstration program. FVL is a science and technology program to develop four classes of advanced aircraft – light, medium, heavy and ultra — that can take off and land vertically. The first of the four to be built would be a medium-lift aircraft known as the Joint Multirole, a vehicle that could be adapted for various missions. The Valor is aimed at the Joint Multirole offering.

This would the fourth generation tilt rotor, as our colleague Rick Whittle pointed out in an email. Here’s the sequence: XV-3, XV-15, V-22, V-280.

Bell unveiled the new bird at the big helicopter show, the Army Aviation Association of America’s annual conference in Fort Worth.

The next big question that needs answering is, will the Army fund this program. Stay tuned.