Can BAE’s CV90 Roll From European Success To US Army NGCV?

AUSA: In a promising sign for the US Army’s Big Six modernization plan, not one but three different companies have invested their own money in full-up working vehicles for the Army’s Next Generation Combat Vehicle (NGCV) project:

Now, these aren’t prototypes, but the military equivalent of concept cars, designed to show off their manufacturers’ technology and get discussion going on what the final mass-produced product should like like. But there’s one big difference. 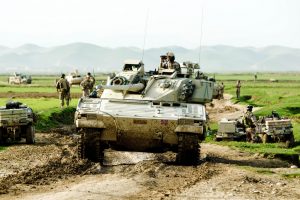 GD’s Griffin and the Rheinmetall-Raytheon Lynx are demonstrators, taking components from current vehicles but putting them together in all-new designs never mass-produced anywhere. By contrast, BAE is offering an evolutionary upgrade, albeit a substantial one, of a vehicle that entered service in Sweden in the 1990s and has since sold well across northern Europe.

The upside of that strategy is a well-established track record, including combat experience in Afghanistan, with decades spent working out the bugs in the design. The downside is that it doesn’t allow for some of the radical advances that the competitors can offer. Whether the Army wants to play it safe or stretch is a fundamental question the service will have to decide.