AUSA: Hollywood gives us the idea that US troops control their weapons with the latest video game-style graphics in glorious, full-color 3D. The reality is more like Pong — only with life and death at stake. 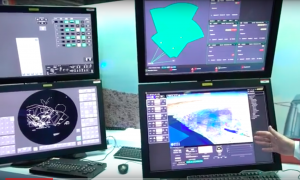 The mainstays of the modern Army, like the M1 tank or the Patriot missile, were introduced in the 1980s back when Atari cartridges were cool. While their electronics have been upgraded many times, visual appeal was a low priority, so most of their screens are eye-straining shades of green or grey.

That’s a potentially lethal problem when tired young troops are staring at flight paths of aircraft and missiles — all intertwined in 2-D greyscale like black-and-white spaghetti that’s been run over by a steamroller — and then have to figure out which is an inbound threat to shoot down and which is a friend to let pass.

So to help Patriot operators see clearly and shoot straight, Raytheon has developed an upgraded Warfighter Machine Interface (WMI) that unscrambles the spaghetti into color-coded 3D. But the only way to appreciate the difference is to see it in action — which is why we got Raytheon’s Bob Kelley to walk us through the features in the video above.