Posted by Richard Whittle on October 9, 2018 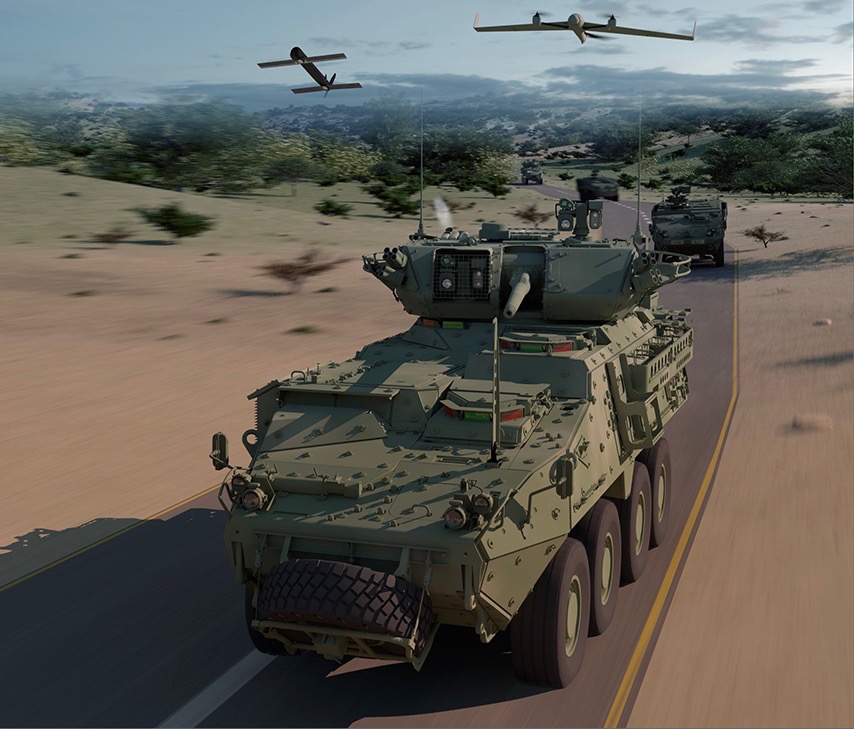 AUSA: The Marines want their Armored Reconnaissance Vehicle to carry a scout drone that can look for threats and target them with loitering strike missiles or drones. Now General Dynamics Land Systems and drone maker AeroVironment are teaming up to offer the same built-in drone for future Army vehicles.

The two companies announced here today that they’ve formed a “strategic relationship” to provide an integrated drone launch and control system on the Army’s new family of armored vehicles, . Of course, that all depends on the Army deciding it’s a good idea. 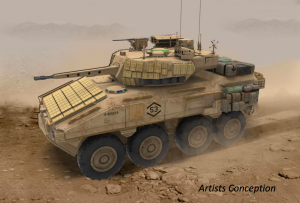 “Originally, this was driven by the Marine Corps,” David Sharpin, AeroVironment vice president for tactical  unmanned aircraft systems, told BD. “The Marines came to GD and said they wanted an organic UAS (unmanned aerial system) and some kind of loitering strike capability. That’s really what started the partnership going.” The Marines are not footing any of the bill for developing the concept, and the Army is worrying about bigger things.

“We’re doing it all on our own money,” Sharpin said. “Sometimes customers don’t know what they want until they actually see it.”

The Army program General Dynamics and AeroVironment hope to add drones to is known as the Next Generation Combat Vehicle. General Dynamics, which makes the M1/A1 Abrams main battle tank and the Stryker, is offering its Griffin III armored fighting vehicle for the NGCV.

The idea of little drones riding atop armored vehicles has been around since the days of the Future Combat Systems (FCS), an acquisition debacle that began in 1999, when then-Army chief of staff Gen. Eric Shinseki set the Army off on a three-decade project to develop smaller and lighter air and ground vehicles, both manned and robotic. Fearing resistance from leaders who favored heavier combat vehicles, Shinseki asked the Defense Advanced Research Projects Agency to kick off FCS. “Tail-sitter” vertical takeoff and landing drones meant to ride along with the new Army vehicles were among the projects DARPA financed – until Defense Secretary Robert Gates cancelled FCS in 2009.

General Dynamics and AeroVironment aren’t the only ones suggesting organic drones to go with new fighting vehicles. Electronics giant Raytheon and Germany’s Rheinmetall displayed their Lynx armored vehicle at AUSA with an array of strap-on kits that included Raytheon’s tube-launched Coyote reconnaissance drone.

General Dynamics and AeroVironment call what they’re offering the Switchblade Organic Missile Battery. As illustrated in the video below, the system – still in development — will consist of a new AeroVironment product, a Shrike 2 Hybrid VTOL (vertical takeoff and landing) reconnaissance drone, linked with a nine-shot canister of proven Switchblade loitering tactical missiles.

The Shrike 2 – derived from a 2011-vintage quadcopter drone AeroVironment has “sunsetted,” as Sharpin delicately put it – will be hybrid in the sense that it combines three multicopter rotors for vertical flight with detachable wings. After a vertical takeoff, two rotors on pylons that hold them forward of the wings tilt forward for horizontal flight while a two-bladed vertical tail rotor stops with its blades aligned with the fuselage for aerodynamic efficiency. For landing, the forward rotors transition to an upward tilt and the tail rotor re-engages and spins. AeroVironment calls the Shrike 2 a “hybrid” because the user can take the wings off and fly it in a hover-only version if preferred, which reduces range and cuts flight endurance from 60 to 30 minutes but allows pinpoint focus on an area of interest.

“This is a tricopter that you can operate with the wings on or off,” Sharpin said. “It can operate as a true multicopter if you’re doing a lot of hovering, or if you’re wanting to cruise and get out in front of something and then stop and hover, you put the wings on.” 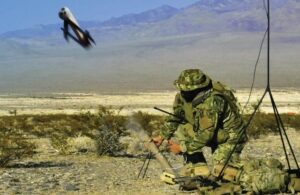 Sharpin said the Shrike 2 “probably won’t come out as a product release until third quarter of 19,” but two prototypes have been built and are in flight testing. In the meantime, AeroVironment is to put on a demonstration of the system for the Marines in November using one of the company’s RQ-20B Puma reconnaissance drones as a surrogate for the Shrike 2. The Puma, though it can be hand-launched, is more than twice and size of the Shrike 2 and has no VTOL capability.

The aircraft are tiny. The Shrike 2 weighs 2.65 lbs., has a wingspan of 4.3 feet, a length of 2.7 feet, a height of just under 10 inches, and can carry a maximum payload of two-thirds of a pound a maximum distance of 12 miles, giving it an effective operational range of six miles. The Switchblade, in use since 2011, mostly by special operations forces, carries a tiny warhead a maximum six miles, according to AeroVironment’s web site. 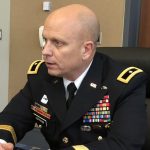 The Marines haven’t bought into the system yet, but they’ve let it be known that “they don’t really want to operate the platform” from inside the ARV, Sharpin said. “They basically want to push a button, have it go do a mission for them, and come back and land” – i.e., fly autonomously. If threats are found, he said, “There’ll be somebody that actually does the consent to launch” the Switchblade. Asked how that would work, he acknowledged that, “It’s not fully developed yet.”

The Army has a different take on how small drones might be integrated with the various combat vehicles it is pondering. Brig. Gen. Richard Coffman, director of the Army’s Next Generation Combat Vehicle Cross Functional Team, told a media roundtable at AUSA that those include:

Almost all of those vehicles are to include some degree of robotics or autonomy, starting with what Coffman said is the top priority, the Optionally Manned Fighting Vehicle.

“We’d like to be able to control UAVs from the Optionally Manned Fighting Vehicle,” Coffman said. “Whether those take off from the back of it or are launched elsewhere, we need to see where they are as far as their technology.”