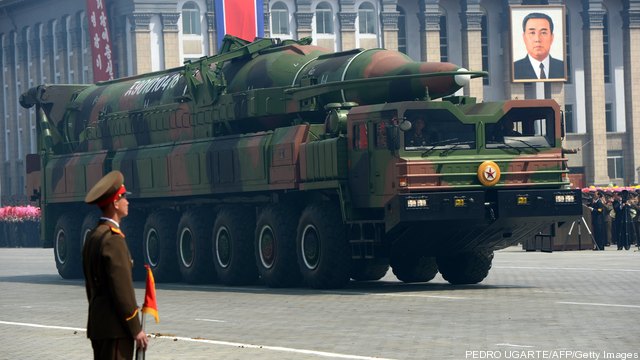 By Trey Obering and Rebeccah Heinrichs

The administration is on record as saying the SM-3 IIB was necessary to increase security of the American people against Iranian missiles. In fact, it was so important to that added protection that the Congress required the administration to develop a hedge strategy in the event that the SM-3 IIB program experienced development problems.

With that system’s demise, the administration should execute that hedge strategy immediately.

Given the geometry of the flight path taken by an Iranian missile fired on the U.S., an East Coast missile defense site would significantly improve protection against such an attack when combined with additional sensors. This will improve the overall performance of the system and will increase the “battle space,” a phrase used to describe the time operators have to hit an incoming warhead before it hits its intended target. These benefits are not realized by just adding GBIs to Alaska.

The concept of placing more GBIs in the two existing sites in Alaska and California is not new. Neither is the idea of a third site.

During the Bush administration, the Missile Defense Agency (MDA) supported emplacing more GBIs in Alaska and it examined building a third site on the East Coast in order to increase the effectiveness of the current system. The two sites, in Alaska and California provided defense of the West Coast, and some defense of the East Coast. In 2007 the Bush administration formally announced the decision to work with U.S. allies to deploy an additional site in Poland and the Czech Republic. Placing the third site there would be a two-fer: defense of Europe and additional protection of our East Coast. Shortly after President Obama took office he canceled the third site, at least in part because of Russian objections.

The need to provide added protection of the U.S. homeland remained. This is why President Obama’s European Phased Adaptive Approach included a phase that would emplace a new missile, the SM3-II B, in Poland. Because this missile had yet to be developed, it bought the administration time to try to alleviate Russian concerns about U.S. long-range missile defense and acted as an assurance to lawmakers who understood the need to increased homeland defense.

Not only does the current system require additional interceptors, the Ground-based Midcourse Defense (GMD) system needs a new exo-atmospheric kill vehicle (EKV), the component that collides with the incoming warhead. It also requires a greater ability to discriminate the enemy warhead from debris or non-lethal elements of the system meant to confuse the missile defense system. The MDA intended a new warhead to do this, called the Multiple Kill Vehicle, but the Obama administration canceled this program.

The goal has always been to stay ahead of the rogue nation state threat, and we need to spend the resources and time to do so.  Meanwhile, the threat from our enemies has only increased.

Pyongyang now has a road-mobile intercontinental ballistic missile (ICBM), which means it could roll out and deploy missiles on a moment’s notice, making it much more difficult for the U.S. to predict where and when a threat may materialize. Pyongyang has also shown it has improved its long-range capability by successfully orbiting a satellite on a Taepo-Dong2 missile.

Similarly, Iran is also improving its missile program. A Pentagon Fact Sheet provided to Congress, said, “Iran also continues to advance its space-launch and longer-range ballistic missile capabilities.  Iran has used a space-launch vehicle, the Safir-2, to place a satellite in orbit, demonstrating some of the key technologies required for ICBM development.”

The U.S. Strategic Command head, Gen. Robert Kehler, told Congress that “I am confident that we can defend against a limited attack from Iran, although we are not in the most optimum posture to do that today…it doesn’t provide total defense today.” Gen. Charles Jacoby, head of Northern Command, has agreed with the description of our defensive posture being “sub-optimum.”

Americans must be optimally defended against a possibly nuclear tipped missile from rogue nations. An East Coast site, combined with a new kill vehicle, increased deployment of GBIs, and the deployment of other mobile missile defense interceptors will significantly improve America’s missile defenses capabilities.

Specifically, MDA should be given the direction and funding this year to promptly conduct site evaluations on the East Coast of the United States to deploy a third missile site. The site should include the upgrade and relocation of the X-band radar currently at Kwajalien Atoll in the Pacific. The time for prolonged deliberations is over. The U.S. should take the necessary steps now to provide greater protection of the American people.

Trey Obering, a senior vice president at Booz Allen, was director of the Missile Defense Agency. Rebeccah Heinrich, a defense analyst at the Heritage Foundation, was a House staff member for Rep. Trent Franks.