WASHINGTON: The Navy’s cost and labor estimates for its highest priority — and most expensive — shipbuilding program are “unrealistic,” “not reliable,” and “overly optimistic,” according to a new Government Accountability Office report released Monday.

Current Navy plans call for construction on the first of 12 Columbia-class nuclear-armed submarines to begin in 2021, with an overall price tag of $128 billion. But the GAO’s latest audit of the program found that the Navy both failed to account for typical shipbuilding cost increases, and the complexity of actual “hands-on” labor hours it will take to build the boats.

The result is that the Navy will likely have to ask Congress for billions more over the next several budgets to keep work moving along on what is already a tight schedule to get the boats in the water to make up for the retirement of Ohio-class subs over the next decade-plus.

“Without an updated cost estimate with more realistic assumptions, Congress will be asked to commit billions of dollars for the lead submarine without knowing the full potential cost of construction and the possible effect on other shipbuilding programs,” the report said.

GAO didn’t venture its own estimate, but it cited a study by its sister agency, the Congressional Budget Office, that the Columbia program might cost almost $145 billion — 13 percent above the Navy figure.

Typically, shipbuilding programs experience a whopping 27 percent cost growth during the lie of their new builds, the GAO points out, which would add billions to the Columbia’s overall cost. That historical increase was not factored into the Navy’s plans. 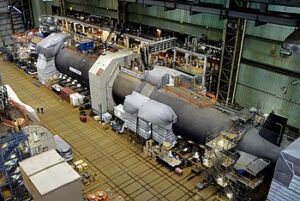 Already, a problem with the welding on its missile launch tubes that was discovered early on has cost contractor BWX some $27 million to repair, but Navy officials insist that the problem won’t push back the delivery schedule for the first boat.

The first of the 12 Columbia subs is scheduled to enter service in 2031, and the class will eventually carry a staggering 70 percent of the country’s nuclear arsenal within their hulls.

That capability makes the Columbia the key to the nation’s nuclear triad, and absolutely critical to the Pentagon’s overall nuclear and national security strategy for decades to come. And the boats need to be in the water by time Ohio-class subs are retired, which will already lead to a dip in the number of nuclear-capable boats in the water.

In a sign of the urgency of the program, the Navy stood up a program office for the Columbia, a rare move for a program that hasn’t started construction yet.

The Navy’s acquisition and research chief, James Geurts,  told reporters last month that he wanted to get ahead of any more hiccups. “I did not want to wait for crisis. I wanted to ensure we were proactively working the program,” he said.

With a build schedule with little room for error, the Columbia has “a lot of challenges ahead,” he added, but with a full PEO shop managing issues, he thinks any problems will be stamped out quickly.

The GAO, however, questioned the Navy’s figures, including estimates for how many hours of labor will be needed to build the boats.

The Navy anticipates that it will take about 12 million labor hours to build the lead submarine. But “this represents 17 percent fewer labor hours than what was needed for the lead Virginia class submarine, when adjusted for weight differences,” the government auditors point out. Therefore, “the touch labor hour estimate is overly optimistic—with assumptions on construction efficiencies that are either unsubstantiated or unprecedented compared to Virginia class and other shipbuilding historical data.”

In a letter dated Feb. 1, Kevin Fahey, the Pentagon’s assistant secretary of defense for acquisition, wrote in response to the GAO that the Navy’s cost estimate for the Columbia will be updated in 2019. He also said that the Navy disagrees that labor and cost estimates are faulty, but instead, the “supplier base remains the highest risk to construction readiness” and the Navy is investing in supporting the industrial base in order to shore up some of those risks before they impact the program.