UPDATED with Army comment AUSA: In a promising sign for the US Army’s Big Six modernization plan, not one but three different companies have invested their own money in full-up working vehicles for the Army’s Next Generation Combat Vehicle (NGCV) project:

These aren’t prototypes, but the military equivalent of concept cars, designed to show off their manufacturers’ technology and get discussion going on what the final mass-produced product should like like. 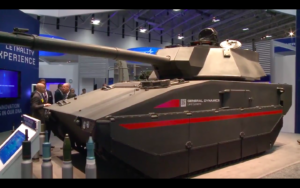 In this video, General Dynamics Land Systems’ Mike Peck walks us around the Griffin III, the latest in a series of GDLS demonstrator vehicles for the Army. The hull is descended from the British Army’s Ajax vehicle, but there’ve been extensive changes both visible and internal. The previous Griffin was a pure tank — offered for the Army’s Mobile Protected Firepower (MPF) program — without any passenger capacity. This version, while similar in weight, scales down the main gun from 120 mm to 50, while adding room for six fully equipped infantry in back.

Now, a full US Army infantry squad is nine men. But after the cancelled Ground Combat Vehicle (GCV) went north of 60 tons trying to accommodate that many humans under heavy armor, the Army’s been willing to consider splitting the squad between two vehicles, as it has to do with the current M2 Bradleys anyway. The Rheinmetall-Raytheon Lynx, by contrast, can fit a full nine-man squad in back but weighs significantly more. That’s the kind of tradeoff the Army will have to wrestle with as it tries to make its future vision a reality.

UPDATE BEGINS One encouraging sign for General Dynamics came from the Army’s program manager for NGCV, Col. Jim Schirmer, at an AUSA briefing Tuesday. The Army is leery of a new and unproven design, Schirmer said, but it’s willing to push the state of the art on the armament — there’s a 50 mm gun the Army’s developing that’s of particular interest — and perhaps on sensors. Where the Army doesn’t want to take any chances is on the fundamentals of powertrain, suspension, and track.

Why is this good news for GD? Because their vehicle combines the 50 mm with the proven powertrain, suspension, and track of the British Ajax. That mix of innovative and proven might just hit the Army’s risk management sweet spot. UPDATE ENDS