AUSA: General Dynamics looks like the early favorite to replace the Army’s 1980s-vintage M2 Bradley troop carrier. That’s my personal assessment after talking at length to officers and contractors at last week’s Association of the US Army conference, where months of uncertainty finally gave way to some real clarity about both what the Army wants and what industry can offer.

In brief, GD’s Griffin III demonstrator seems to hit the sweet spot between innovative and proven technologies that the Army wants to start fielding a Next Generation Combat Vehicle (NGCV) as soon as 2026. Of the three vehicles on display at AUSA, 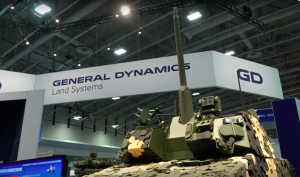 The competitors do have a lot in common. All offer tracked vehicles with diesel engines — even BAE, which once touted its hybrid-electric drives as a key selling point. All three boast open-architecture electronics to ease future upgrades, an integrated Active Protection System to shoot down incoming anti-tank warheads, modular armor that can be layered on or stripped down depending on the mission, and a turret capable of mounting a 50 mm gun, the Army’s preferred caliber.

Only the Griffin actually has a 50mm installed right now, however. The others currently have 35mm cannon. It’s also the only vehicle that can point its gun almost straight up, at an 85 degree angle, to hit rooftop targets in urban combat, something the Army has worried about extensively. Details like this suggest that General Dynamics has been listening more closely to the Army than its competitors. In fact, even where the Griffin III underperforms its competitors, most notably by carrying fewer infantry, it does so in areas where the Army is willing to make tradeoffs. 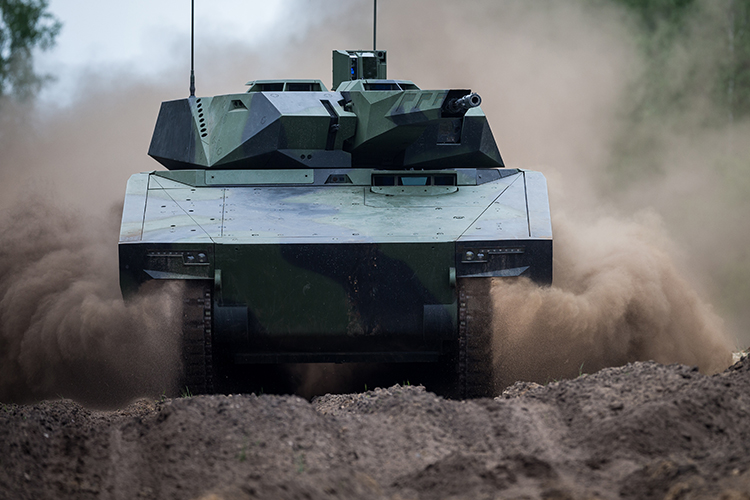 The End of the Beginning

Now, it’s still early in the NGCV race. While we only saw three contenders on the floor at AUSA, it’s still entirely possible a fourth player could jump in. My money’s on the team of SAIC and Singapore-based STK, which is already offering a modified Singaporean army vehicle for the US Army’s Mobile Protected Firepower (MPF) light tank. 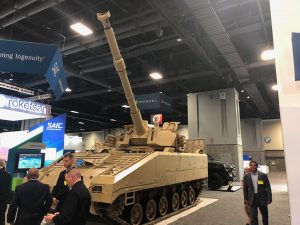 The other MPF competitors are BAE, with an update of the Armored Gun System cancelled in 1996, and GD, offering a version of the Griffin. By November, the Army will award two of the three companies contracts to build prototypes. If either GD or the SAIC-ST team wins, they’ll have at least a slight advantage for NGCV, since buying related vehicles for both roles will simplify training, maintenance, and supply. (BAE’s AGS is totally unrelated to its CV90, so an MPF win wouldn’t help it on NGCV).

By contrast to MPF, the competition for NGCV is only at the end of the beginning, not the beginning of the end. The Army’s still refining its requirements, in part based on discussions with industry at AUSA.

What’s the timeline? Col. James Schirmer, the program manager, said at the conference that “we are within weeks of having that requirement finalized.” Brig. Gen. Richard Ross Coffman, the Army’s director of armored vehicle modernization, said a formal Request For Proposal (RFP) based on those requirements will come out no later than January.

So there’ll be time for the competitors to revise their NGCV designs before submitting them. Even after that, more than one company will get a contract to build prototypes for Army testing.

What’s the objective that drives both this pace and the technological tradeoffs the Army is willing to make? Fielding the first operational unit in 2026 — nine years earlier than the original plan — to help deter Russian aggression. 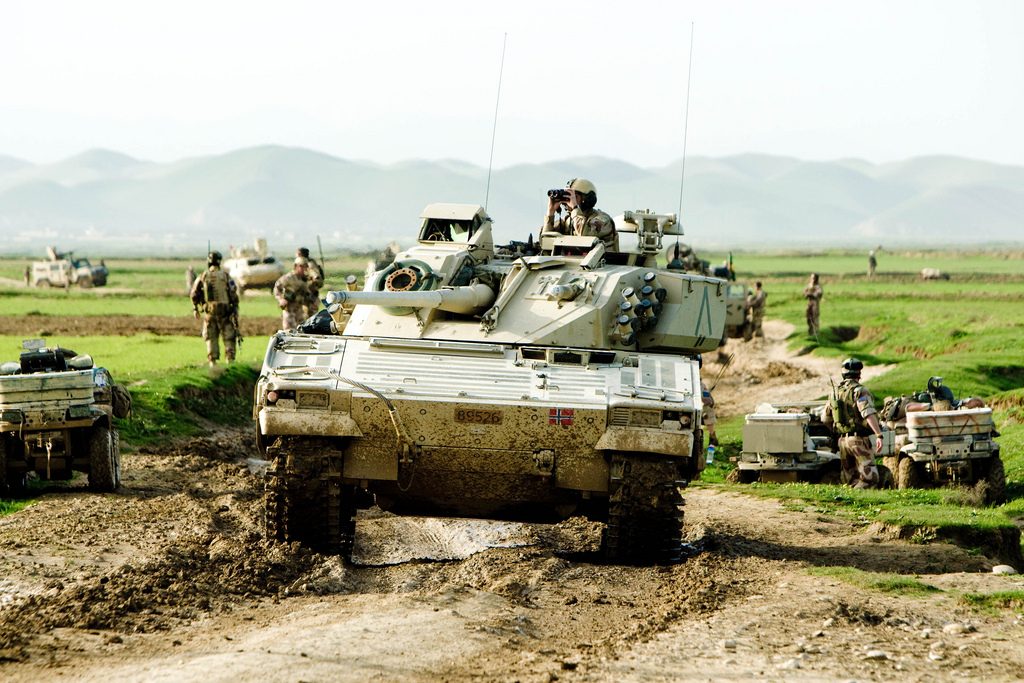 “All options are on the table, but the schedule will be the schedule,” Brig. Gen. Coffman told reporters at AUSA. “We would like to field this vehicle by 2026.” 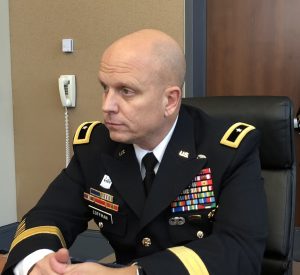 “If someone could develop a clean sheet design that could meet that timeline,” he said, “it’d be great, but I don’t know that’s doable.”

(By contrast, the potential replacement for the M1 Abrams tank is coming later, so the service is looking for radical innovation).

Schirmer offered more specifics. “We have a pretty challenging test schedule… very similar to MPF, (so) we really can’t afford a clean sheet design,” he said. The more mature the component technologies, the better, he said, but what’s best is that those individual components have been proven as an integrated system.

Specifically, Schirmer said, “for the Bradley replacement, we are going to be buying vehicles that are based on a mature architecture — powertrain, track, suspension — that’s already in service somewhere in the world.” 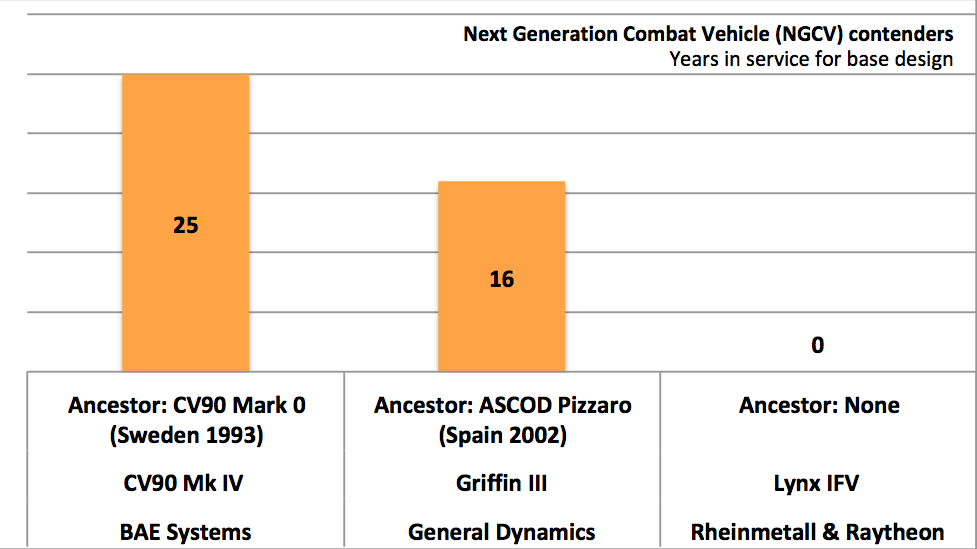 While these remarks leave the door open for the Lynx, or at least ajar, they’re not particularly encouraging. By contrast, the CV90 series entered service with Sweden in 1993, with variants now serving in Denmark, Estonia, Finland, Holland, Norway, and Switzerland. The Griffin III is the latest member of the ASCOD family — the Spanish Pizzaro, Austrian Ulan, and British Ajax — which debuted in Spain in 2002.

While the Army wants a proven hull, however, Schirmer says there is one area where technology is advancing fast enough for it be worth taking some risk: lethality, i.e. the gun and sensors. In particular, while the Bradley has a 25mm chaingun, the Army really wants NGCV to have a 50mm cannon — firing shells about four times as big — that’s now in development at the service’s Ammunition Research, Development, & Engineering Center (ARDEC). 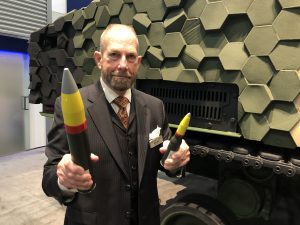 Mike Peck of General Dynamics shows the difference between the new 50 mm round the Army wants to use on NGCV and the 25 mm round on the current M2 Bradley.

That gun, the XM913, is currently integrated on just one competitor, the Griffin, although both the Lynx and CV90 turrets could accommodate it. All three vehicles, like the Bradley, also have room in the turret to mount anti-tank missiles of various types. The Griffin on the show floor also mounts a launcher for AeroVironment Shrike mini-drones, while the Lynx will have the option to launch Raytheon’s Coyote: Both mini-drones can be configured either with sensors to scout or with warheads to destroy.

Even on weaponry, however, the Army is willing to make compromises to speed fielding, just as it introduced the original M1 Abrams with a 105 mm gun but with room to upgrade to the desired 120mm when it was ready a few years later. For NGCV, Schirmer said, they want the vehicle to have the 50mm gun eventually but “may settle on the 30 in the near term, just to meet schedule.” 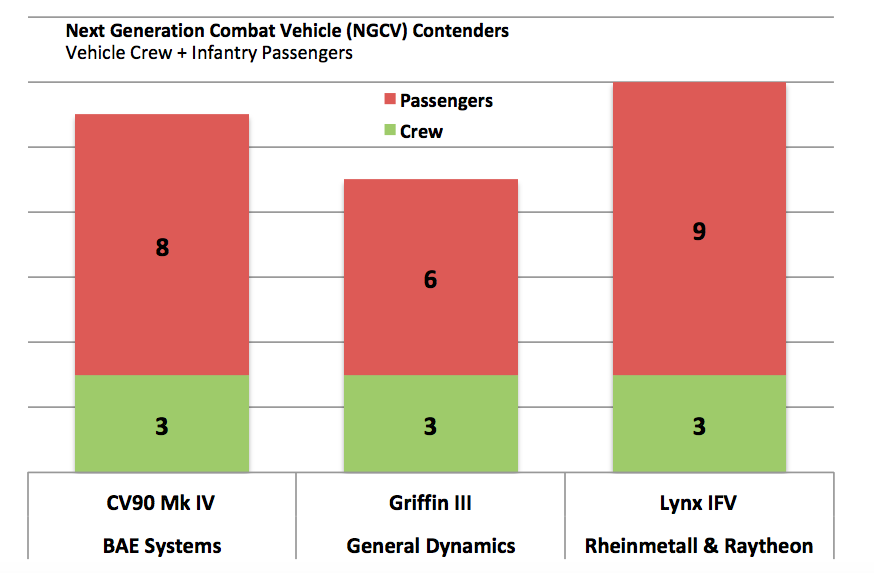 Besides gun caliber, the other easily measured aspect of an armored vehicle is its weight, which is very much a two-edged sword. There’s been no breakthrough in armor materials since the 1980s and none on the horizon, so the only way to get better armor is to make it thicker. So a heavier vehicle is probably better protected, but it also burns more fuel, wears out more spare parts, and has more trouble getting places: Bridges and transport aircraft in particular can only take so much weight. 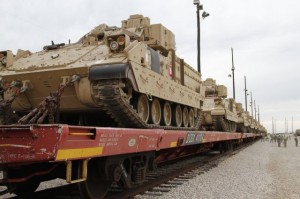 Bradley armored vehicles from the 1st Cavalry Division shipping out for a deployment to Eastern Europe.

“Having just left Poland…and traveled to Korea and elsewhere, the infrastructure doesn’t support a heavy vehicle,” Coffman said. “At this stage, before the RFP is written, we’re looking at everything as options, (but) the idea is we have a smaller vehicle that is lighter, but survivable.”

Now, armor weight is a product of both the thickness of the protection and the size of the vehicle to be protected. For a troop carrier, whose raison d’être is delivering infantry to close combat, what drives size is the number of passengers. So, Coffman said, “in order to maintain the same under-armor protection for our soldiers, if you have nine people in the back of a vehicle, it gets really big and heavy.”

Of the new vehicles, only the Lynx is large enough to carry a full squad of nine infantrymen. The CV90 comes close, with eight. But the Griffin only has room for six, little better than the Bradley, which can manage four to six depending on their gear. 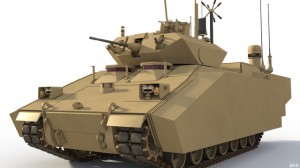 The Army has long sought a troop carrier that could carry both a full squad and a turret full of heavy weapons to support them. But after designs for the (canceled) Ground Combat Vehicle program grew from 60 to 84 tons, the service decided it was asking too much.

“Right now we’re looking for a three-man crew with six soldiers in the back,” said Col. James Schirmer, the Army’s program manager for NGCV. That’s “a pretty important compromise.”

Now, the weight of a vehicle can change from upgrade to upgrade, or even from mission to mission. Modern vehicle design includes modular armor that troops can add on or strip off in the field. Of the vehicles at AUSA, the CV90 is by far the lightest, ranging from 26 US tons (stripped for air transport and light combat) to 40 tons (fully uparmored for heavy combat). The Lynx as configured for the floor at AUSA was the heaviest, but in fact the vehicle offers the widest range of options, from 35 (stripped) for 55 (heavy urban combat). Griffin doesn’t have a stripped-for-travel configuration, but ranges from 38 to 50 tons. 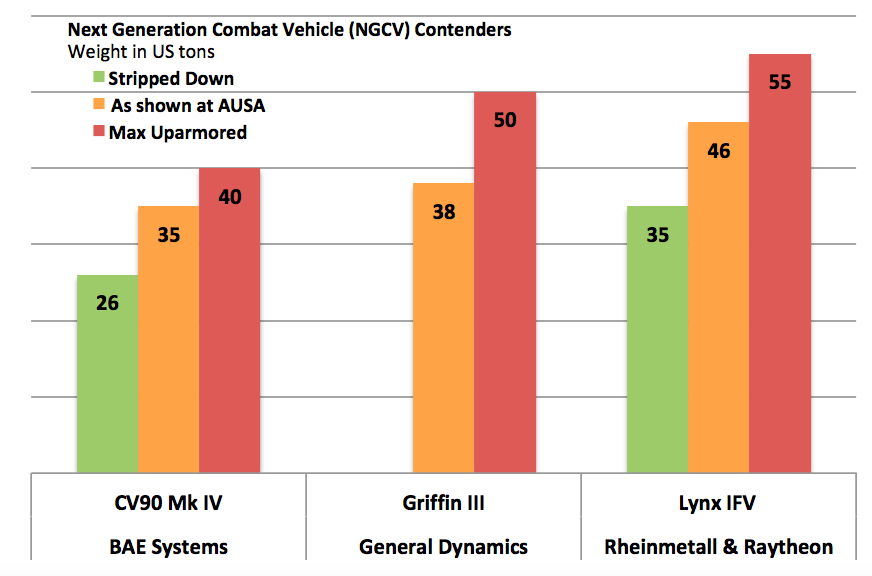 Even as the Army tries to maximize the number of passengers the Bradley replacement can carry, it’s trying to minimize the number of crew required to operate it. In fact, while NGCV is still the name of the overall program, which also includes unmanned Robotic Combat Vehicles, the Bradley replacement specifically is now officially known as the Optionally Manned Fighting Vehicle (OMFV). That’s because the Army foresees future advances in automation making it possible to conduct at least some missions by remote control, starting with simpler tasks like convoys but expanding over time. 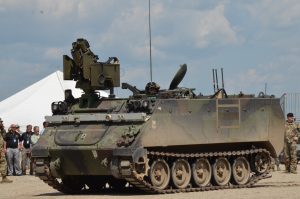 But even when the human crew is aboard, the Army wants a limited Artificial Intelligence to help them out. The machine might find its own way around obstacles to reach a destination set by the crew, for instance, so they can rest or focus on scanning for danger. Or it might pull together sensor data to pinpoint threats: heat and sound might warn of an approaching enemy tank, for instance, or reveal where an hidden anti-tank missile team just fired from.

The current Bradley, by contrast, is cluttered with screens and controls from 40 years of upgrades. That puts a heavy burden on both the electrical system — many Bradleys can’t actually use all their upgrades at once — and the cognitive capacities of the three-man crew: driver, gunner, and commander.

The Lynx and CV90 have tidier electronics than the Bradley but the same three crew positions. The Griffin, by contrast, can be configured for either three crew members or two, depending on how much you trust the automation to assist them on their current mission. Initially, in 2026, the vehicle will probably need all three humans, GD exec Mike Peck admitted, but if you don’t make a two-man crew an option in the initial design, he argued, you’ll never get there through upgrades.

BAE and the Rheinmetall-Raytheon team could certainly redesign their crew positions before submitting their final proposals. But the fact that General Dynamics has already designed in reduced manning — and is already talking about it — is another area they seem to have been listening most closely to the Army.